Have you ever stood on a clear, windstill day at the edge of a lake and marveled at what is mirrored from the other side? Each object, each detail faithfully represented—upside down! If we had no other evidence and our total view were limited to the images in the water, we might accept the inversions as real. But once we see the whole view, we can smile at the deception.

So it is with the material, enigmatic view of man and the universe. From the very limited standpoint of human understanding, life may sometimes seem to be one vast sea of misery, disease, and hopelessness, with only occasional instances of happiness, health, longevity. Yet the Bible states with authority that God, in His infinite allness, created only good and was satisfied with His work. Two very different portrayals! Which of the two we believe determines to a great extent what we are experiencing.

The Founder of the Christian Science movement, Mary Baker Eddy, made a stunning discovery: that the mortal span, happy or otherwise, is not ultimate reality but an inverted picture compiled from the allegations of the senses. It is mirage—error in thought resulting in error in experience. But Mrs. Eddy doesn't stop there. Stripping away the material picture, she shows us man's real identity as the faithful expression of God, Spirit— eternal, upright, spiritual. The following passage by Mrs. Eddy summarizes these truths. Called "the scientific statement of being," it is read each Sunday in every Christian Science church and Sunday School: "There is no life, truth, intelligence, nor substance in matter. All is infinite Mind and its infinite manifestation, for God is All-in-all. Spirit is immortal Truth; matter is mortal error. Spirit is the real and eternal; matter is the unreal and temporal. Spirit is God, and man is His image and likeness. Therefore man is not material; he is spiritual." Science and Health, p. 468;

There are not two of man—one spiritual and complete, the other mortal and incomplete. Nor did God first make man upright and then allow him to lapse into his antithesis. If we would heal or be healed, we need to disprove the material picture, the false view, and supplant it with the view of man as the spiritual representation of God, until all trace of error is erased in consciousness. Then we discover we have never been anything less than upright, whole as God's ideas—manifesting the holiness of our heavenly Father.

Every statement of truth in Mrs. Eddy's writings elucidates and furthers healing. We can prove the efficacy of this sanative method individually if we approach it humbly. Inspiration enlightens us as the truths of Science are thought, not just thought about. Healing then follows.

Christ Jesus lights our way out of materialism into the conscious realm of Soul. He permitted no inverted images to cloud his clear perception of man. Seeing only the truth and evoking the evidence of it, he released the suffering and raised the dead. "Ye shall know the truth, and the truth shall make you free," John 8:32; he said. This promise includes us all.

Healing is not a heavenly gift practiced by few and received by few. It is available to everyone—no exceptions. Its power is activated by the uncovering of one's true, spiritual, and only identity as God's gloriously complete idea. Healing is not promoted by dwelling upon inverted images in the guise of decrepitude, discouragement, resentment, fear, envy, greed, and the like.

Christian Science is not mere theory. It is demonstrable truth. It challenges us to prove reality here and now. We cannot expect to rise very high out of the mists of materiality without proving that we understand their illusory nature. "Befogged in error (the error of believing that matter can be intelligent for good or evil)," Mrs. Eddy writes, "we can catch clear glimpses of God only as the mists disperse, or as they melt into such thinness that we perceive the divine image in some word or deed which indicates the true idea,—the supremacy and reality of good, the nothingness and unreality of evil." Science and Health, p. 205.

Truth is, and as we prove it, we advance into higher regions of perception, finally to gain dominion over all that is finite. In realizing the truths of Science it is important to keep spiritual man and the spiritual universe ever fresh and upright in thought. We must refuse to be duped, to be taken in by inversions of reality, though they may appear enticing.

When examined in the light of Spirit, all the miseries of mankind, poignantly real as they may appear to be, have no more truth than a lie—none at all! A lie can never be proved real; it remains only an inversion of truth. But we can instantly change our view (and our experience) by rejecting the inverted picture and replacing it with the truth. The reality was never really absent—only obscured. As we align ourselves and our thoughts with Truth, we see this very clearly. 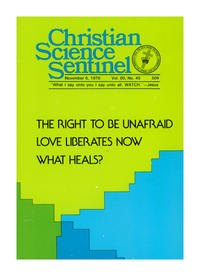