Prayer that avails much

Many students of the Bible share a deep desire to learn from it how to pray more effectively. They see prayer as the greatest force for good in the world, establishing health, peace among nations, righteous government, and harmony in families and communities. The book of James teaches us that fervency is an essential element of such prayer: “The effectual fervent prayer of a righteous man availeth much” (5:16).

Christ Jesus, who prayed more effectually than has any other man or woman, was fervent in his prayers. Among the dictionary definitions of fervent are “earnest” and “ardent” (Webster’s New World College Dictionary), and Jesus was indeed both when communing with God.

But rather than being emotional pleas to a corporeal God, his prayers were filled with the conviction that God is Spirit and All-in-all—that there is none besides God, and that He answers prayer. Mary Baker Eddy describes Jesus’ prayers as “deep and conscientious protests of Truth,—of man’s likeness to God and of man’s unity with Truth and Love” (Science and Health with Key to the Scriptures, p. 12). His mission was to prove the power of Spirit to overcome sin, disease, and death. But it was also to show mankind that this same power is available to all.

As a result of Mrs. Eddy’s discovery of Christian Science, the ever-operative laws of God through which Christ Jesus healed, it is possible for students of this Science to approximate his healing method and success. When we have absolute faith in God and His laws of harmony, enlightened by a spiritual understanding of Him, our prayers are effectual.

Mrs. Eddy writes, “You must feel and know that God alone governs man; that His government is harmonious; that He is too pure to behold iniquity, and divides His power with nothing evil or material; that material laws are only human beliefs, which govern mortals wrongfully” (Rudimental Divine Science, p. 10). Healing prayer involves feeling with every fiber of our being the certainty and efficacy of the power of Truth over error, of Spirit over matter, of Love over fear, of Soul over material sense.

I had been praying for myself all afternoon, but now en route to our next destination I began praying with more fervency.

I experienced a healing a few years ago in which fervency was key. I was on a European tour, when I became quite ill while our group was visiting a site in Austria. I had been struggling that morning with a heavy cold. As we walked inside one building, I suddenly fainted. I quickly revived and declined medical attention.

However, at lunchtime I found that I was unable to retain either food or drink. It seemed best not to join the group for the afternoon tour. Our director, feeling that I was dehydrated, left me with some bottled water. When the group returned, she asked if I had drunk it. I told her I had not been able to retain it. She then said that if I did not soon improve, she would have to put me in the hospital.

I had been praying for myself all afternoon, but now en route to our next destination I began praying with more fervency—with an even greater conviction in the omnipresence and omnipotence of Truth. I recalled this statement in Science and Health: “Truth is an alterative in the entire system, and can make it ‘every whit whole’ ” (p. 371).

Soon the bus stopped at a place where we were invited to sample some Austrian pastries. I was ready to do so and thoroughly enjoyed one. Back at our hotel later on, I called a Christian Science practitioner overseas to support me in my prayers for a complete healing, and I was soon entirely free of the symptoms.

According to Luke, chapter 11, immediately after Christ Jesus teaches his disciples the sacred words of the Lord’s Prayer, he tells them a short parable about a man who goes to a friend at midnight and asks him for three loaves of bread, as he has a guest who has arrived at his house and has nothing to serve him. Refusing the request, the friend says, “Trouble me not: the door is now shut, and my children are with me in bed; I cannot rise and give thee” (verse 7). Jesus points out, “I say unto you, Though he will not rise and give him, because he is his friend, yet because of his importunity he will rise and give him as many as he needeth” (verse 8).

The lesson appears to be that fervent prayer is answered when the one who prays persistently holds his ground until his prayer bears fruit and there is healing.

Following his parable, our Master assures his disciples of God’s reward for such prayer. He reminds them that as good parents, when their children ask for bread, they don’t give them a stone; if they ask for a fish, they don’t give them a serpent; or if they request an egg, they don’t offer a scorpion. Likewise, if someone asks for the Holy Spirit, he will receive it: “If ye then, being evil, know how to give good gifts unto your children: how much more shall your heavenly Father give the Holy Spirit to them that ask him?” (verse 13).

We, too, can expect to receive the Holy Ghost, or divine Spirit, when we petition our loving Father-Mother God for the spiritual understanding of divine Science, through which divine Love becomes nearer and dearer to us and we learn to pray effectively.

If divine Love is very near and dear to us, our ministrations to the sick will radiate that Love. They will be aglow (a synonym for fervent) with the consciousness of God’s great love for His idea, man. Mrs. Eddy gives us a perfect model for such prayer when she writes, “The tender word and Christian encouragement of an invalid, pitiful patience with his fears and the removal of them, are better than hecatombs of gushing theories, stereotyped borrowed speeches, and the doling of arguments, which are but so many parodies on legitimate Christian Science, aflame with divine Love” (Science and Health, p. 367).

Fervent prayer, and absolute confidence in God and in the Science of Christ, avails much. It is effectual in quelling fear and in uplifting consciousness to the realization of Truth and Love, which conquers sin and heals discord of every kind.

Dorcas Strong is a Christian Science practitioner and teacher in Cleveland, Ohio. 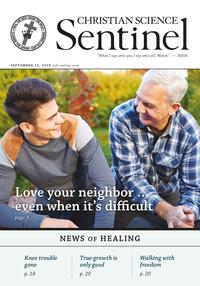