During times of uncertainty and political divisiveness, people want stability. They want to know that the institutions that undergird their lives, such as government, are resting on a more sure basis than the shoulders of well-meaning but imperfect men and women.

Centuries ago, the prophet Isaiah foresaw a government not of fallible people, but of an infallible, all-powerful, all-good God. He said that this divine government would be represented by the Son of God born into the world, and that “the government shall be upon his shoulder: and his name shall be called Wonderful, Counsellor, The mighty God, The everlasting Father, The Prince of Peace” (Isaiah 9:6).

In the past, I, like many, tended to think of Isaiah’s prophecy as depicting a future time in which God alone governs the world and there are no longer human governments. But the study of Christian Science has helped me to understand that while presidents and prime ministers come and go, the real power and authority in our lives always has been, and always will be, the one eternal, divine Mind that guided and inspired the biblical prophets and was fully represented by Christ Jesus.

As we become more conscious of the divine power operating here and now, we will see its harmonizing effect in our daily lives.

More than anyone before or since, Jesus was conscious of the fact that his divine Father, not a person or people, governs all, and that “as in heaven, so on earth,—God is omnipotent, supreme” (Mary Baker Eddy, Science and Health with Key to the Scriptures, p. 17). When Pontius Pilate, the governor of Judea, asserted to Jesus that Pilate had the ultimate authority over him, saying, “Knowest thou not that I have power to crucify thee, and have power to release thee?” Jesus responded, “Thou couldest have no power at all against me, except it were given thee from above” (John 19:10, 11). Given the circumstances, it might have seemed otherwise. But three days after his crucifixion, Jesus rose from the sepulcher unharmed; and several weeks later he ascended, showing that no human power had authority or power to overrule the Father’s will or His government of His children.

As the most selfless and powerful man the world has ever seen, who calmed storms with a word, healed the sick and sinning, and raised the dead, Jesus declared, “I can of mine own self do nothing” (John 5:30). He knew his power was not his own but sprang from a humble obedience to the will of God. He recognized God’s sovereign and eternal government, expressed in justice, mercy, wisdom, and compassion. As we become more conscious of the divine authority and power operating here and now, we too will see its harmonizing effect in our daily lives.

This became very evident to me a few years ago when an architectural project I was managing ran into serious problems and my relationship with the client deteriorated quickly. I felt that his demands had become unfair, both to me and to the workers who had sacrificed so much time and effort to deliver a good product. He felt that the solutions we were proposing were unfair to his expectations and financial investment. Our differing positions on the matter seemed irreconcilable, and a court battle seemed inevitable as the dispute grew bitter.

Fearful of this, I enlisted the help of a Christian Science practitioner to pray for me in order to resolve this conflict. Right away I saw that I had to decide who or what was governing this situation. If it was human ego or opinion, the conclusion would satisfy at most only one of the parties. I knew that, in reality, there is only one Mind, or Ego—the divine Mind—and that man, God’s image and likeness, reflects this Mind in wisdom, selflessness, and generosity. I prayed to see more clearly that this Mind alone was governing, supplying everyone with the spiritual ideas that would lead to a solution that was fair to all and did not leave anyone out—not me, not the workers, not my client.

I saw that as God’s child, I have the same mind that governed Christ Jesus—I am the reflection of the divine Mind.

While the dispute necessitated the hiring of legal assistance, Mind’s guidance was evident throughout the deliberations that followed. As my thought yielded to this one Mind, which is devoid of the self-serving human ego, there was progress. Genuinely wanting to see God’s will done rather than mine, I watched with great expectation as the lawyers for both parties worked for the good of their clients, standing on the law rather than on human emotion or personal bias.

Much more than legal help was at work, however. Through the practitioner’s prayers as well as my own, what was growing in my thought was a spiritual understanding of my client as the loved and loving child of God, governed by divine Principle. This is God’s immortal law of justice, through which Christ Jesus demonstrated that all of God’s children are protected. I saw that in fact, as God’s child, I have the same mind that governed Christ Jesus—I am the reflection of the divine Mind. And in this Mind there are no opposing thoughts, only unity of purpose. Paul preached, “Let this mind be in you, which was also in Christ Jesus” (Philippians 2:5), and I felt the peace of seeing for myself that we all “have the mind of Christ” (I Corinthians 2:16).

As this shift from a material to a spiritual basis of thought occurred, I saw that the government had always been on God’s shoulder, the divine Principle of the universe.

As a result, a final agreement was reached quickly. The needs of each party were taken care of simultaneously. The healing of the dispute was so complete that the client later called to ask if I would be interested in his next project. He said that despite our differences, he respected me. Though I did not feel ready to accept the offer, I had come to respect him also—which would have seemed inconceivable to me only a few weeks earlier.

In an age of political tribalism, when differences of opinion are being constantly advertised in the media, it’s very tempting to believe that government is incapable of working together to address the problems we face as a nation or people; that only if our candidates are elected, or reelected, will we be able to solve the issues we face as a country. But does good government begin or end with a particular person in office? Isaiah prophesied, referring to God’s government as demonstrated by Jesus, “Of the increase of his government and peace there shall be no end, upon the throne of David, and upon his kingdom, to order it, and to establish it with judgment and with justice from henceforth even for ever” (Isaiah 9:7).

In other words, the government has never rested on our, or any other individual’s, shoulders. It is resting, right now, upon the wisdom and power of Almighty God. As we turn thought away from believing that power rests on human opinions and personalities and recognize God’s government of the universe, evidence of the stability and peace it brings to our lives will inevitably appear. 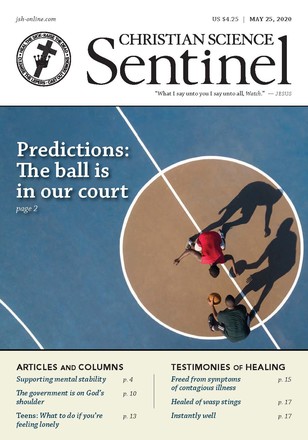 Predictions: The ball is in our court

Joseph showed me a different way to pray

When a strained relationship was mended

The government is on God’s shoulder

What to do if you’re feeling lonely

Freed from symptoms of contagious illness

By The Christian Science Board of Directors | May 2020

With reasoning anchored in God, no more worrisome “what ifs”