As a child I attended a Christian Science Sunday School, and have continued to adhere to its teachings ever since.

In 1959 I became a listed practitioner in The Christian Science Journal, and I practice this Science every day.

During the Second World War, I was a school teacher in Empangeni, Zululand. There I became ill. In order to return home to Durban, I needed a certificate from a doctor, who diagnosed me with inflammation of the kidneys. I was given a prescription for some medication and was informed that if I did not take the medicine, I would always suffer from this disease.

I remember that I had a great longing for spirituality, and I decided to follow what Mary Baker Eddy wrote in Science and Health: "Only through radical reliance on Truth can scientific healing power be realized" (p. 167). A Christian Science practitioner gave me treatment through prayer, and I prayed for purity of thought. I was completely healed, and returned to teaching within a few weeks. The symptoms never recurred.

In whatever town I lived, I became a member of a branch Church of Christ, Scientist. I was often needed as an organist.

Last year, I had to go for an eye test for new glasses. I was told I had a cataract in one eye, and should go to an eye specialist. Instead, I turned to prayer. And I wrote a letter to a practitioner in England, asking her to give me two Christian Science treatments to support my prayer.

Mary Baker Eddy wrote in Science and Health, "Man is the expression of God's being" (p. 470). I decided to stick to this truth.

During this time I realized I had an issue with a friend who had voiced his opposition to some things I hold dear. It became clear to me that I "should forever silence all private criticisms" (Mary Baker Eddy, Message to The Mother Church for 1902, p. 14). Nor should I feel that my conclusions were the only right ones. Instead, I had to see the good in this friend. Man, created by God, can only be spiritual and perfect, the image of Love. As I continued to pray, I was able to see the kindness in my friend, and we were again getting on fine together.

While reading and studying Science and Health early one morning, about three or four weeks later, I could suddenly see clearly with both eyes. I knew the cataract was no longer there. A few days later, I received a letter from the practitioner, which assured me that she had prayed for me.

The healing of cataract was confirmed when my eyes were recently tested again, and, in spite of my advanced years, I was granted a three-year renewal of my driver's licence.

What joy the practitioner and I felt about this lovely healing! 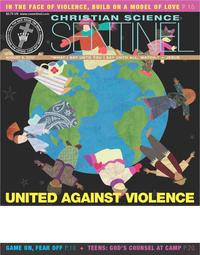