The past few years have seen a number of natural disasters (including earthquakes, floods, tornadoes, hurricanes, and droughts) wreaking destruction and loss around the world. Mankind has long assumed that there is nothing that can be done in the face of these “acts of God,” as they are still called. But any notion that such disasters could ever be the will of God or have anything to do with God must come from a misapprehension of the true nature of God.

Anyone who has suffered from these calamities needs to be treated with the greatest compassion, support, and understanding love. However, such compassion need not include accepting into one’s consciousness the necessity of such destructive events. And this caution is certainly not a sign of indifference on the part of God-centered people who hold to the truth that no man, woman, or child can be a victim of a cause apart from God.

Mary Baker Eddy, the Discoverer and Founder of Christian Science writes, “What you see, hear, feel, is a mode of consciousness, and can have no other reality than the sense you entertain of it” (Unity of Good, p. 8). Clearly, what we hold in our human consciousness is manifested as our human experience. Therefore, it is unwise to allow the suggestion of any disaster to be a part of our consciousness. We should hold to the truth that the material experience, with its sorrows and disasters, is a misconception of the real, spiritual creation, or kingdom of God, which Jesus said “is nigh at hand” (Luke 21:31).

Thus we see that the destructive elements of storms or other physical phenomena can be eliminated from human experience through a right understanding or consciousness of God’s government of the universe.

Since there is no destructive element in divine Love, natural disasters are in reality delusions of the material senses. It is not the will of infinite Love, God, that any of His children should suffer. God is the only cause. So, it is not God who causes destruction, but rather the misunderstanding of Him, based upon the belief that there is a power besides God capable of causing a disaster.

God is wholly good, so only good, or that which is perfect, emanates from God. Then what appears as a disaster must be a lie about God’s perfect creation. In view of this, Christian Science teaches that we do not defend ourselves against a real disaster. But rather, we refute the lie that disasters are real.

How do we correct a lie? With the truth! As Jesus said, “Ye shall know the truth, and the truth shall make you free” (John 8:32). To destroy the lie is to destroy all there is of what appears as a natural disaster. Mrs. Eddy explains “. . . that the atmosphere of the human mind, when cleansed of self and permeated with divine Love, will reflect this purified subjective state in clearer skies, less thunderbolts, tornadoes, and extremes of heat and cold; . . .” (The First Church of Christ, Scientist, and Miscellany, p. 265). We can lift thought into the atmosphere of Soul, which is the opposite of material sense or sensation.

How important it is to be increasingly alert to reject the challenge of a powerful, deadly Mother Nature by repudiating the aggressive suggestions of material, destructive forces, regardless of where they claim to be manifest, and by acknowledging God’s allness and infinite ability to maintain and govern His perfect creation.

Each of us has the responsibility to be alert and not accept disaster as natural or inevitable. When we hear that the tornado or hurricane season has begun, we don’t have to passively accept this as true, nor do we need to feel a false sense of peace just because the area where we live isn’t prone to such phenomena. Instead, we can vigorously deny that these threats are unavoidable, and recognize that God alone controls His universe in perfect harmony.

In his book Twelve Years with Mary Baker Eddy, Irving Tomlinson wrote: “Mrs. Eddy taught us that weather conditions are not beyond God’s control, and that they can be corrected through right prayer.” Tomlinson said Mrs. Eddy “made it clear that Christian Scientists are not to attempt to control or govern the weather.” Rather, they “should know that God governs the weather and no other influence can be brought to bear on it” (Amplified Edition, p. 269).

This relates to the Bible’s assurance that God gave man dominion over all the earth (see Gen. 1:26). Jesus demonstrated this dominion when he quieted the storm that arose over the Sea of Galilee as he was crossing with his disciples: “And he arose, and rebuked the wind, and said unto the sea, Peace, be still. And the wind ceased, and there was a great calm” (Mark 4:39). Jesus showed that no one need feel helpless or fearful before hurricane, fire, earthquake, or flood. He stilled storms through prayer, and we, too, can pray, because the same laws that Jesus demonstrated are operating just as effectively today.

The understanding that God, Mind, is directing and controlling His spiritual universe in perfect rhythm and harmony, eliminates any fear of destruction.

So, in our lives today, when we hear a report that a storm is imminent, do we concede power and authority to the threat and consider it unavoidable? Do we continuously consult the weather maps to determine our safety? Or are we alert to recognize that God, divine Principle, governs the universe harmoniously? Since God, good, fills all space, there is no place where a disaster can take place—as the prophet Jeremiah, speaking for God, put it: “Do not I fill heaven and earth? saith the Lord” (Jer. 23:24).

A few years ago, a Christian Science lecture was to be held on a Saturday in a coastal city on the Gulf of Mexico. On Monday of that week the weather bureau announced that a huge hurricane was headed directly toward the city and would make landfall late Tuesday. The Navy flew their aircraft to safe places, people boarded up their homes, and some residents evacuated the city. In light of this activity, the members of the local branch church held a special meeting to consider what to do about the lecture. They prayed to grasp more fully that there could be no destructive element in God’s universe, and nothing could interfere or obstruct the good God ordained.

Later it was announced that the hurricane had slowed down, but the church members continued to pray along the lines mentioned above until the gratifying news came through that the hurricane had simply dissipated out in the bay. Now, while hurricanes typically deteriorate after making landfall, it’s unusual for a hurricane to simply disappear. The city was left untouched, and the lecture, which was organized to bless the community, went ahead as scheduled.

It’s vital to be alert at all times to reject any suggestion of disaster, and to realize clearly the omnipresence of God, good, and the powerlessness of evil to interfere with or be present in His creation. Because God is All, it follows that there is no time nor season when God’s goodness and power are not being expressed—when God is less than God.

Although it’s widely accepted that natural disasters are unavoidable, Christian Science affirms the truth that the only real universe is created and governed by the one, all-inclusive, divine Mind, God. This fact precludes the possibility of another cause governing through material laws of destruction, expressed as tornado, flood, earthquake, fire, or volcano.

But as we pray in the face of such threats, we must be sure that our thoughts come from God and are totally free from any sense of destructiveness. To the degree that we do this, we will experience the dominion described in the first chapter of Genesis, because earth’s only reality for us lies in the consciousness that comes to us from God.

It is important, particularly in the case of natural disasters, where people are often unexpectedly plunged into distress and danger, for us to counter the often frightening outward picture with a spiritual understanding of the fact that man is, in reality, God’s beloved creation and remains untouched by material occurrences, by misfortune and terror.

The understanding that God, Mind, is directing and controlling His spiritual universe in perfect rhythm and harmony, eliminates any fear of destruction and improves human consciousness. It becomes clearer that an intelligent, divine Principle does not create a universe that can be disrupted or destructive.

And the acceptance of this scientific fact aids in eliminating from world consciousness false images of thought that are not representative of God. They are the violent and destructive manifestations of mortal mind, and as such should be denied any real existence.

There can be no violent or deadly conditions in God’s universe, which reflects only Spirit and the divine qualities of peace and harmony. And we can all join in affirming that this perfect universe is the only universe there is. The “still small voice” from God that spoke to Elijah speaks to you and me today, assuring us that God is “not in the wind . . . not in the earthquake . . . not in the fire” (I Kings 19:11, 12). Since God is the only cause, and He is good, there can be no destructive event.

Jack Edward Hubbell is a Christian Science practitioner and teacher. He lives in Palo Alto, California. 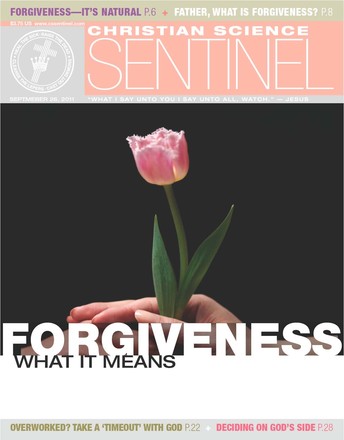 ‘This makes us see glimpses of God’

A new era in health care?

Father, what is forgiveness?

Breaking the chains of resentment

Song for the day

What’s happening in your neighborhood?

I turned to God

Healing on a school trip

Reprinted from The Christian Science Monitor: To anyone feeling cynical

‘Go, and do thou likewise’

Overworked? take a ‘timeout’ with God

‘I knew God was in control’

Deciding on God’s side