When I stopped letting age define me

In my late teens, I wanted to learn to play the harp and hoped to become a professional harpist. But the head of the harp department at the local music conservatory told me I was too old to take up the study and make a career of it.

Years later, after establishing myself in another arts-related career, I met a world-famous harpist in New York City. I told her that if I had met her when I was a child, I would have taken up the harp, and I shared the story of being denied the opportunity to study the harp because of my age. She immediately told me that if I stopped letting age define me, I would never again be too young or too old to do anything. And if I did this, she’d take me as a student. I agreed and commenced studying with her.

I found out later that this woman was a Christian Scientist. Her encouragement to stop letting age define me was my introduction to the practical truths taught in Christian Science. I am grateful for finding this freedom—and for my fulfilling career as a harpist that followed.

An interesting part of finding freedom from age-related definitions was a personal audit of how often I limited myself based on age. It was shocking. After it became natural for me to refute limitations related to whatever age I seemed to be, I realized how important it was that I also stop estimating others’ abilities based on age. I am grateful for that healing insight and how it changed the way I see myself and others.

Years later, I quit a lucrative position in the arts to work solely as a harpist. But during my journey from New York City to my new home in San Francisco, I became seriously ill and was hospitalized. After ten days, I was diagnosed with a terminal illness and an unknown blood disease. I was told that I had no more than two weeks of life left and that I should put my affairs in order.

My neighbor back in New York was a Christian Science practitioner, and I telephoned her for metaphysical treatment. I told her that several doctors were all of the same medical opinion that I was terminally ill. She replied that the operative word there was opinion. That made sense to me; I didn’t need to accept an opinion as a fact.

She also asked me what I was afraid of, and the first thing that came out of my mouth was, “Death by embarrassment, with a harp and a shopping bag on a street corner in San Francisco.” She explained that I was not going to San Francisco to seek supply but rather to reflect God’s supply by sharing my harp music. She further assured me that I am receptive to divine Mind, which is a name for God, and that it would not have occurred to me to devote myself to the study and practice of harp were there not a demand for the supply I was to share.

The brief telephone conversation from my hospital bed was followed by a routine physical check by the hospital staff, who found that my temperature was suddenly normal—I had no fever. I called the practitioner back, and as I told her about the remaining symptoms, she helped me identify simple and understandable spiritual counter facts, and soon each symptom was reversed. Within 24 hours, I was released from the hospital.

I continued on my way to San Francisco, and when I arrived, my host told me that someone who worked for a prominent local hotel had called him to ask if he knew of a harpist who could play for an upcoming event. My host had taken the liberty of booking me, and from that day forward, I have been continuously employed.

I am grateful for Christian Science and for all of its practitioners and teachers. I am also glad to have the opportunity to share this experience, as it is a powerful reminder to me of the efficacy of the practice of Christian Science. This potent and demonstrable statement from the Christian Science textbook comes to mind: “. . . Truth is real, and error is unreal. This last statement contains the point you will most reluctantly admit, although first and last it is the most important to understand” (Mary Baker Eddy, Science and Health with Key to the Scriptures, p. 466). I have found that this statement unlocks the understanding for me to both heal and be healed.

Send a comment to the editors
NEXT IN THIS ISSUE
Article
Exercise—what are our motives? 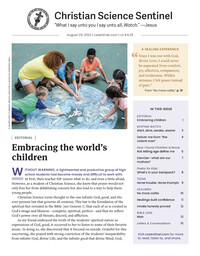