Dear Brother McLellan:— Our dear Leader directs me to write you in her behalf, enclosing you, for insertion in the Sentinel, the accompanying copy of a letter from the Carolinas. She has been deeply touched by the tender remembrances from the South-land, her former home, and was especially pleased with the beautiful cross of fresh-cut gladiolus, which the Christian Scientists sent from there for the dedication of the Concord church, on last Sunday, and which was so generally admired by all who attended.

The chivalric kindness of the noble Southrons, during her short sojourn in their country in the forties, has not been forgotten by her in the intervening sixty years; and it is particularly dear to her now to see that her religious teachings are accepted by the good people of the present generation.

Beloued Brethren:— The Christian Scientists of North and South Carolina, through the First Readers of their churches, ask that you will accept the small amount enclosed, in trust gratitude and most loving unity, at this happy hour for our revered Leader and for you. Deeply sensible of your privilege in receiving the beautiful gift from the Discoverer and Founder of Christian Science, we would join you in thankfulness that her precious life which in its fulness has meant so much to you. once touched these two states in its youthful promise. and that our fullest salvation has come through her teachings. Yea. she has given to all the world a love so wondrous, that. as was recently said by one saved from the grave, it will heal the whole race of men if they will but accept its healing.

Grateful for your service and for your faithfulness to her whose mission isthe establishment of a Church that heals the sick as well as the sinner, we are thankful to God and rejoice with our Leader in the prosperity and triumph of the Cause of Christian Science.

This letter bears the following self-explanatory endorsement in behalf of the Concord church.

No doubt the Sentinel will receive many expressions of gratitude for the pleasure, profit, and help received at the dedication of the Concord church, and I should like to tell of some impressions, other than those herein mentioned, but regard for your valuable space prompts me to conciseness. The dedication of this church was truly a happy event in every way, and the mere fact of being privileged to attend the service, so simple yet so impressive, was a benediction in itself. I wish, however, to speak more particularly of the reading of our dear Leader's matchless address.

Since Mrs. Eddy thought best not to be present and deliver the address herself, which would have been a boon second only to the address, I am happy to have heard it read in a manner at once dignified, intelligent, reverent, and effective. The Concord Monitor says of Mr. Young's reading of the address,—

"The crowning feature of the programme, naturally, was Mrs. Eddy's Dedicatory Address. The address was read by Mr. Bicknell Young, C.S.B., of Chicago. Mr. Young is a man of striking personal appearance, with keen, intellectual features and possessing a rich, musical voice. His delivery of Mrs. Eddy's words was superb, and his splendidly accurate articulation served finely to demonstrate the perfect acoustics of the auditorium. Mrs. Eddy's illuminating and suggestive sentences sank deeply into the mind of the vast congregation, who listened with rapt attention as her thought was developed in chaste and striking phrase. Many were moved to tears by her language and all received a strong spiritual uplift from her words of mighty, yet tender, import."

This is a just tribute to the manner in which Mr. Young, with his rech, musical voice so perfectly modulated and his faultless enunciation, read the words of life, health, and holiness which Mrs. Eddy had prepared for her followers and for the whole world. Mr. Young's lectures, and his delivery of them, have been the subject of much favorable comment, but in these he was rendering his own composition, here he was speaking for another,—a task not usually so easy. It was a happy service that he rendered our Cause in thus presenting our Leader's words in this perfect manner: but the joy of the occasion is in this. that again our Leader's prophetic utterance has been fulfilled.—Divine Love has met the need, a masterly reader for a literary production that is destined to become historic.

Send a comment to the editors
NEXT IN THIS ISSUE
Testimony of Healing
I first heard of Christian Science about ten years ago,... 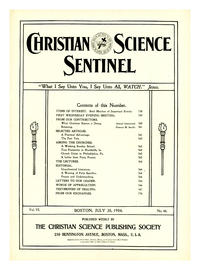