What we owe to our children

When my first grandchild was three months old, I had the pleasure of taking care of him for about ten days. I had forgotten what it was like to be immersed in caring for such a pure and precious child, whom I knew to be truly an idea of God. It really was exalting. I found I didn’t want to have a thought, word, or action that wasn’t worthy of coming into his experience.

For example, when I gave Mikayel a bottle during the evening news, it wasn’t long before I turned off the TV. It was just too difficult to feed him and edit out reports of violence and all those commercials depicting disease and drugs. Not knowing how much he was capable of taking in, I decided that TV could wait until he had some tools with which to defend himself.

Once, while carrying Mikayel, I raised my voice at one of the dogs to get him to stop doing something. That made the baby cry. It helped me realize we don’t come into this world conditioned to startling words or loud noises. It helped me to question why I thought there weren’t alternatives to such jarring actions.

All of this was reminiscent of my very first days of motherhood. I remember the strong desire that welled up inside me to be the best person I could be so that a suitable model would be presented to my child. I wasn’t a Christian Scientist then, but in a few short years I read the Christian Science textbook, Science and Health with Key to the Scriptures by Mary Baker Eddy, and came across this sentence: “Nothing unworthy of perpetuity should be transmitted to children” (p. 61). The sentence had a familiar feel to it, although I was reading it for the first time.

That’s the way it is with an idea that comes from God. It has always been in divine Mind and is something we all innately know, even before we are particularly conscious of it or choose to be governed by it. And we can effectively support the children of the world and their caregivers by praying to bring out the correct idea of parenting that already exists in man’s true consciousness. Each of us, as the complete reflection of God, includes all the rightful attributes of our divine Parent (see Genesis 1:26, 27)—and this fact, when understood and put into practice, makes a good parent.

Seeing everyone as God’s reflection as we pray for mankind, we can help every parent and guardian of every child by acknowledging that the perfect qualities of our Father-Mother God are being expressed through each idea of His creation. Mothering and comforting ministrations are divinely natural to every individual charged with the care of a child.

The fatherhood and motherhood of God, reflected in God’s idea, man, are never absent, never overridden by false concepts such as exploitation, domination, or lack of compassion. We can know with deep conviction that everyone is, in reality, created to express the unselfed love so important in caring for children. Our recognition of this truth helps support the innate ability of all mankind to respond selflessly when called upon to care for those innocent ones, who express such childlike qualities as trust, optimism, and goodness. Our youth, after all, are the budding citizens of our future world, and worthy of our utmost attention and very best efforts.

The Glossary of the Christian Science textbook referenced above defines children in part this way: “The spiritual thoughts and representatives of Life, Truth, and Love” (p. 582). Life, Truth, and Love are capitalized because they are synonyms for God. Can mankind do less than honor and cherish children, and see them as precious spiritual ideas who are linked to God, as we all truly are?

Each of us, as the complete reflection of God, includes all the rightful attributes of our divine Parent.

Is it possible that our prayers can have an effect on the thought of others and help uplift world consciousness about the care of children? Years ago I was shown the need to pray about this issue and was given evidence of the effectiveness of such prayer. With my toddler daughter in a stroller, I was shopping one Sunday afternoon in a discount department store. A young woman with a little boy who looked to be about three years old was also shopping while pushing a stroller. They came to my attention because, although it appeared that she was the mother of the child, she was in a very matter-of-fact way making hateful remarks to him and calling him names.

The woman’s remarks bothered me greatly, and I moved away so my child wouldn’t hear them. I began to pray. Although I knew enough about Christian Science to know I didn’t have the right to interfere with another’s thinking without his or her knowledge and consent, the thought came to me that neither was I to bear witness to a false concept of man. In other words, I needed to stop being impressed by the picture before me and pray to see and know only what was actually true about the idea God created.

A short while later I took something into the dressing room to try on, and this young woman and her child were in an adjacent room. The verbal abuse of the little boy continued. At this, I turned wholeheartedly to God, and at that moment overwhelming compassion for both the mother and the child swept over me.

I don’t remember exactly what came to thought, but I do remember acknowledging that one spiritual idea could not harm another, nor could anyone be made to act out feelings of being victimized by the birth of, or need to care for, a child. I prayed to know that an innocent child could not be blamed or become the victim of another’s frustration or wrath concerning what she might be going through. I affirmed that love is eternally expressed in all of us, as God’s spiritual offspring; therefore, love is always present between a mother and a child and could be felt and expressed. I saw that love is the only true motivating factor of parenthood.

I have no idea how long I prayed along these lines, but gradually I became aware of a completely different attitude being articulated in the other cubicle. The most tender and loving words were coming out of this mother’s mouth. She was expressing the affection of real parenting to the little fellow.

This incident taught me a good lesson about how to pray for the children of the world. It assured me that God shows us what direction our prayers should take, and that our prayers do make a difference. 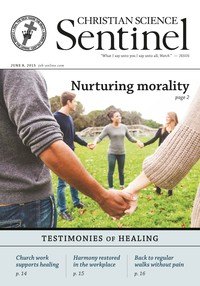