THE AMERICAN INSTITUTE on Domestic Violence says that in recent years 85 to 95 percent of all domestic violence victims have been female, though there are reports of abuse toward men, as well. It's also reported that domestic violence is the leading cause of injury to women, who are more likely to be attacked by someone they know rather than by a stranger.

In some cultures, abuse within families has been an accepted form of control or discipline for centuries, and where that isn't the case, often a silent history of abusive behavior is passed from generation to generation, quietly and behind closed doors.

But no matter what the statistics say about abuse and its history, abuse is not an inescapable condition. There is a divine law that lifts the dark and hidden shadows of abuse and sets everyone free to discover that they are the loved and safe children of God.

Over the years, I've gained a strong conviction through the teachings of Christian Science that the goodness of God's creation is here and now. And that means it has always existed—even where abuse is going on—and that you and I have the God-given ability to see and feel the joy of that good creation.

God's love and constant maintenance of His perfect creation are forever realities in which each of His children is lovingly provided with all good, and each is tenderly cared for. It is a love that heals and protects, takes us out of the midst of violence, and can restore wholeness to our relationships. We are all blessed with spiritual natures that can be tapped into and expressed in any human relationship, in any circumstance.

Some years ago, a young woman called me to pray with her about what she described as her abusive marriage. Both she and her children felt threatened by a domineering and verbally abusive husband. The abuse had escalated over the years, and her young son was asking her to leave his dad because he feared him. The woman was reluctant to consider a divorce, feeling she should stay married for the sake of the family and for financial reasons.

As this woman and I talked and prayed together, she experienced a growing trust that God would guide her through this situation. We agreed that no form of abuse is acceptable. Finding lasting solutions is the right of each victim of abuse. And we turned to a powerful directive applying to all forms of discord, in Science and Health with Key to the Scriptures by Mary Baker Eddy: "Rise in the strength of Spirit to resist all that is unlike good. God has made man capable of this, and nothing can vitiate the ability and power divinely bestowed on man" (p. 393).

It was clear that in this case of abuse, the crucial words were "in the strength of Spirit," and, "God has made man capable of this, ..." Everyone's God-given strength and innate capacity to destroy the conditions of abuse are a powerful force that is instantly available. And with this sense of authority supporting our prayers, the young woman and I found "the strength of Spirit" to be a very real power to lean on.

We prayed to understand that all good comes to each of us directly from God. It felt right to start at the beginning, so to speak, and counter the old belief that this woman was ever made from a man's rib (see Gen. chap. 2), and instead know that both woman and man are perfectly loved spiritual expressions of God's goodness. So, actually, nothing this woman's husband did or said had any power to make her feel bad—or even good.

As it became clearer to her that there is one Cause and Creator, which is God, and therefore only one effect, she became more peaceful and trusted that there would be a right outcome. She found joy in the idea that she was rediscovering her relationship to a loving and protecting God. In spiritual reality, God was her Maker, without connection to a human sense of a husband with flaws and abusive tendencies.

Genesis 1 says that God created both male and female (see verse 27). So we can safely deduce that we are complete in the qualities we each express—rather like thinking of each ray of the sun as including all of the sun's qualities. A woman can express what might often be considered masculine qualities, such as strength and courage; and a man can express tender, nurturing, compassionate qualities often associated with women. Awakening to this potential, which comes to all of us from God, begins to melt away fear and provide courage to move forward in a direction that brings freedom, dominion, and joy.

The qualities that constitute this spiritual identity are explained in this passage from Science and Health: "We must look deep into realism instead of accepting only the outward sense of things" (p. 129). Spiritual qualities are free for everyone to awaken to, express, and enjoy. God's law of abundance naturally brings to light a clearer expression of goodness, dissolving the mistaken belief that matter has any power or reality to create or destroy good.

To get a clearer view of her spiritual nature, the woman I was helping made a list of the qualities she was gradually appreciating had been given to her by God. She began to really expand her sense of what spiritual completeness was all about. Thinking of divine qualities, looking up references to them in the Bible and Mrs. Eddy's writings, and trying to express more of them in her everyday life, gave her a sense of dominion and strength.

We considered this wonderful promise in the book of Isaiah: "For thy Maker is thine husband; the Lord of hosts is his name" (54:5). The qualities of a husband or a wife are an aspect of God's genuine caring for His creation, expressed in each individual's completeness. Each of us includes all male and female qualities in perfect balance. They are inherent in our spiritual nature, derived from God. So nothing can be lacking or be lost.

As my friend and I reasoned together, we agreed that although her husband was well-off financially, she should stop thinking of money or a person as her source of security. Instead, we translated that material commodity into thoughts such as abundance, freedom, grace, completeness, gratitude.

As a result of this spiritual translation, her fear began to dissolve, and a growing sense of wholeness emerged. She grasped that God's husbanding love was always with her, and she became less intimidated by her husband's behavior. She realized that God's love is powerful and always with each of us. This understanding convinced her that the good in her life was from God. She could fully accept Jesus' promise of strength and hope. The Christ presence he represented is still here. Mrs. Eddy described this presence as "the spirit of God, of Truth, Life, and Love, which heals mentally" (Science and Health, p. 137). The Christ frees and lifts us out of situations that threaten to harm us. The Christ restores harmony and peace to those affected by abusive behavior.

THE LORD MOST HIGH IS YOUR FORTRESS. RUN TO HIM FOR SAFETY, AND NO TERRIBLE DISASTERS WILL STRIKE YOU OR YOUR HOME. GOD WILL COMMAND HIS ANGELS TO PROTECT YOU WHEREVER YOU GO. —PSALMS 91:9–11 (CONTEMPORARY ENGLISH VERSION)

Jesus taught that God's love is more than human goodness. It's an all-powerful, unchanging, divine Principle—our only real Cause. He proved that our true nature is spiritual, and that we are never vulnerable mortals. God is not passive, but always active, and always present to heal, save, and bless humanity. Jesus' works brought the power of the Christ to light in human experience and revealed our dignity and our status as God's children. He confirmed that we are always in God's love, as, for example, when a defiant mob wanted to stone him and he was able to pass calmly "through the midst of them" (John 8:59).

Mrs. Eddy wrote: "... to all mankind and in every hour, divine Love supplies all good" (Science and Health, p. 494). This statement is the reality of each of our moments, and we all have the right and ability to make this the only reality governing our lives.

Jesus showed that there is a deep, lasting solution to the conditions that beset humanity, no matter how severe or longstanding the human condition seems to be. The Christ presence is like a light to darkness. It reveals God's truth that we are living in the kingdom of heaven right now, right where we are. Understanding this truth, even just to a degree, is applying the law of God that Jesus spoke of when he said, "Ye shall know the truth, and the truth shall make you free" (John 8:32).

An understanding of the Christ presence lifts impositions that the Liar, called Devil or Evil, tries to impose on innocent lives. It demonstrates that evil, or "animal magnetism"—a term Mrs. Eddy used to describe evil—has no strength at all.

After the woman and I had prayed with these powerful ideas, she began to feel stronger, and her thinking cleared. She was led to end the marriage. She went forward, feeling wrapped in God's love, and with a calm authority that guided her every step of the way.

After the divorce, she met and married a man who beautifully expresses the qualities she had been cherishing in her prayers. It's been a happy and uplifting relationship that's blessed her family in many ways. It has brought her a growing understanding of the description of heaven given in Science and Health: "Harmony; the reign of Spirit; government by divine Principle; spirituality; bliss; the atmosphere of Soul" (p. 587). This harmony is felt in the lives of those who are touched by the Christ as understood in Christian Science. It results in healing and freedom from the impositions and pain of abusive situations. And it has the power to eliminate abuse for good—healing the abuser, and even restoring a marriage.

Heaven is a present reality anyone can awaken to here and now, thought by thought. We are never outside our loved place in God's kingdom, and God's messages are always present to lead us to that understanding. The Bible and Mary Baker Eddy's writings guide thought to the heartening realization that "the kingdom of heaven is at hand" (Matt. 3:2). There, we are all safe from harm, cherished, and always cared for. CSS

Ginny Luedeman is a Christian Science practitioner and lecturer who lives in Salem, Oregon. 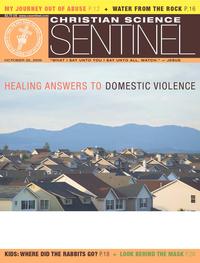