Polls and pundits don’t offer much hope these days. Unemployment, housing foreclosures, and government deficits in the United States and abroad are embroiling many. Distrust of government is not uncommon. Fear and confusion overshadow public thought at a time when courage and hope are most needed.

The Bible offers many proofs of God’s help at times when all hope seemed lost. Take its account of Elijah and the 450 prophets of Baal. If you go by numbers, 450 men praying to their god, Baal, to accept their sacrifice against one man’s prayers to his God, didn’t seem like good odds for Elijah. But Elijah didn’t go by numbers.

The agreement was that each group would prepare a sacrifice, and that the god who answered by fire would be God. Baal’s prophets prepared their offering and called and jumped around it to attract Baal. But nothing happened.

Then Elijah’s moment came. Perhaps to make a point, Elijah poured water—lots of water—on his sacrifice, which was to be burned with fire. Then he prayed, “Hear me, O Lord, hear me, that this people may know that thou art the Lord God, and that thou hast turned their heart back again.” The next sentence says simply and beautifully, “Then the fire of the Lord fell, and consumed the burnt sacrifice, and the wood, and the stones, and the dust, and licked up the water that was in the trench” (I Kings 18:37, 38).

Such prayer is more than just a wishful hope. It is hope infused with spiritual knowledge.

One understanding, trusting, devoted voice outweighed the cries of 450. The fire of the Lord fell and consumed the material limitations, the belief of life and power in matter and material gods. Other examples of how spiritual understanding overcame the impossible abound: Daniel, falsely accused, spent the night in a den of lions, and came through unharmed; three Hebrews who refused to worship any god but the God of Israel were thrown into a ragingly hot furnace, yet emerged unscathed. Jesus—who taught the truth of God’s love for man, and embodied Christ—was crucified and buried in a tomb, yet came forth victorious.

Spiritual thinkers today, especially those who understand the Science of Christ discovered by Mary Baker Eddy, can recognize the power of the one Mind to erase divisions in the world and to conquer hate. Their prayers can support the discovery of solutions to global, local, and personal problems.

The first step in reopening the door to hope is understanding that evil of any kind—lack, war, deception, fear, distrust—has no foundation in Truth. Mary Baker Eddy’s comments in her book No and Yes make this abundantly clear: “The feasibility and immobility of Christian Science unveil the true idea,—namely, that earth’s discords have not the reality of Mind in the Science of being; and this idea—dematerializing and spiritualizing mortals—turns like the needle to the pole all hope and faith to God, based as it is on His omnipotence and omnipresence” (p. 10). Such prayer is more than just a wishful hope. It is hope infused with spiritual knowledge. Elijah’s hope in God had no hesitation. He didn’t hope the fire would fall; even before he spoke, he knew God would answer. He understood who God was, and that He wasn’t Baal. How did he know this? Through his daily acquaintance with the one God. And as we follow his example, our conviction and knowledge of God bear the same witness to God’s presence in these times.

Each student of the Bible and Mrs. Eddy’s writings can address global, local, and personal problems with this conviction. We can’t outline how God’s presence will be made known, but we can be certain that a divine response is inevitable. It is the nature of divinity to respond to His ideas, and all people, as the children of God, are those ideas.

Prayer that rests on this conviction is fearless and filled with hope. It refuses to believe in a power other than infinite Mind, whose precise intelligence can guide humanity through even the trickiest passages. It can provide inspiration for new ideas and for prosperity that rests on love for one another. It can, and always will, defeat even the most intractable problems.

As this change in thought takes hold, we, like Elijah, will also see God’s purpose fulfilled: “Then the fire of the Lord fell” lighting the way to progress and hope for all. 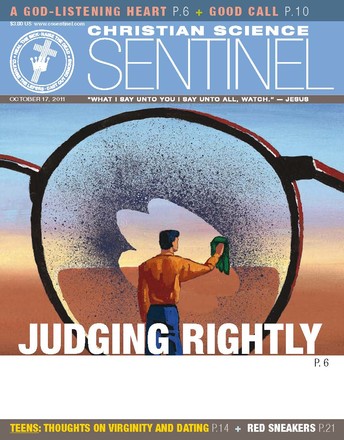 Eyes opened by a stranger

From the Christian Science Board of Directors

From tears to smiles

Thoughts on virginity and dating

A deep dive into the Beatitudes

Recipe for blessedness and true happiness*

Invitation to the dance

A spiritual vision for prison reform

Stay in the race