To ascertain our progress, we must learn where our affections are placed and whom we acknowledge and obey as God. If divine Love is becoming nearer, dearer, and more real to us, matter is then submitting to Spirit. The objects we pursue and the spirit we manifest reveal our standpoint, and show what we are winning.

— Mary Baker Eddy,
Science and Health with
Key to the Scriptures, p. 239

Progress. A word worth examining closely and wisely.

Think of a baby moving from immobility to a crawl, and from crawling to walking. A high school student working hard and successfully improving a math grade. Or a business started in a garage that moves to a warehouse and then to a global marketplace. Such examples fit most descriptions of progress. Progress is perhaps most often defined as forward movement—advancement.

Yet, progress, like anything viewed within the human context, can be negative. A hostage situation can grow progressively worse; doctors refer to diseases as progressing. So, considering progress in a spiritual context goes far beyond the common use of the word.

To the Christian Scientist, progress is a holy thing. It is a Godly concept. It’s not a personal assessment of how we think we’re doing. Progress is not an observation of material sense; it is God’s effect on us.

In one of the two textbooks of Christian Science, Science and Health with Key to the Scriptures, its author, Mary Baker Eddy, defines progress as “the law of God” (p. 233). In the other textbook, the Bible, spiritual progress is well documented. It records the influence of God on His people, showing how He has enabled them to travel the distance from mundane beliefs, mental darkness, and despair, to the very heights of perfect peace and enlightened hope. Both books share inspiring accounts of healing, regeneration, and spiritual discovery—including the ability to transcend matter’s most extreme conditions.

Moses, for example, corralled the thought of his people and led them from pagan and limited concepts to the progressive concept of one God, on whom they could learn to rely for every need. The physical obstacles he faced with the children of Israel were simply the outward evidence of their objections and resistance to spiritual advancement, which had to be faced down and conquered in order to comply with God’s intentions for them.

Mary Baker Eddy wrote of this courageous and faithful leader: “Moses advanced a nation to the worship of God in Spirit instead of matter, and illustrated the grand human capacities of being bestowed by immortal Mind” (Science and Health, p. 200).

Others who came after Moses had marvelous proofs of the influence on them of the divine Mind. They, too, were able to experience deliverance from starvation, hardship, wars, torture, and threats of all kinds to their safety and happiness. Elisha, Elijah, Ruth, Jeremiah, Isaiah, and so many others discerned the supreme power of God, relied on it, and were delivered. They lived the progress that is God’s law.

Though the record of God’s law of progress climaxes in the life and mission of Christ Jesus, it surely extends from his example to the apostles and their acts, and to our own lives—right now. There’s a statement Mary Baker Eddy makes about progress that captures, to my sense, Jesus’ living example of spiritual advancement: “Progress is spiritual. Progress is the maturing conception of divine Love; it demonstrates the scientific, sinless life of man and mortal’s painless departure from matter to Spirit, not through death, but through the true idea of Life,—and Life not in matter but in Mind” (The First Church of Christ, Scientist, and Miscellany, p. 181).

A friend of mine recently proved the spiritual nature of progress by rejecting the proposition that his life and well-being were dependent on matter. Instead, through spiritual sense, he set about demonstrating his life to be the expression of Spirit, God. When he called and asked me to pray with him, he told me he was worried about a growth on one of his eyelids that had become inflamed, noticeable, and somewhat uncomfortable. He was increasingly concerned about remarks made by his family, who are not Christian Scientists, and about his ability to work as a stage performer. It seemed that fear of condemnation by others was an obstacle to his progress.

Progress is not an observation of material sense; it is God’s effect on us.

I pointed out to him that once the perfection of God and His idea, man, is deeply established in prayer, fear needs to be eliminated through its remedy, divine Love. As one’s fear is quieted, the focus of one’s work becomes a little like weeding a garden. Thoughts about one’s identity and work spring up to be rooted out. As God’s beloved children, we are all cherished and satisfied. A spiritual idea need never strive for love or acceptance, and cannot be pushed aside by competition. In God’s kingdom, abundant with goodness, all are heard, blessed, adored. In God’s garden, all of the flowers bloom. God “performeth the thing that is appointed for [us]” (Job 23:14). We are the very expression of the activity of God.

Soon it became clear to my friend that the only eye on him was the watchful, loving gaze of the Father, not a hard, scrutinizing public eye. We prayed to see that the only true view of God’s idea is held by God Himself, and that my friend’s family was supplied with the same view by the same God to whom we were appealing. As a Bible verse puts it in describing Jacob’s nearness to God, we are “the apple of [His] eye” (Deut. 32:10). This phrase not only captures the fondness God has for His children, but also the tenderness of His care for each individual. As we talked, we realized that we don’t have to look at others in our field to assess our progress, but rather, can focus our gaze constantly on God, the only source and sustainer of growth. Growth is measured by our nearness to God. Love for God—not unsightly physical flaws—is all that can expand.

As we prayed, my friend made and reported steady progress—spiritual progress—and refrained from reporting from a material point of view. He diligently tended, like a dedicated gardener, to the facts of his spiritual identity. Together, we affirmed that nothing could impede his progress, because it is the law of God; and nothing could obscure his perception of himself, including his holy purpose to express God. This was his career, and we were enlivened by God to see this happen.

In a matter of days, my friend called to report that the growth on his eyelid, which had once seemed intractable to him—and perhaps to others—had disappeared. Together we had proved that progress is a sure sign of our yielding to God’s reality, to His unstoppable law of good. It is never an assessment of how we are doing in a human life.

In Isaiah we read: “Thus saith the Lord, the Holy One of Israel, and his Maker, Ask me of things to come concerning my sons, and concerning the work of my hands command ye me” (45:11). What could be more comforting and assuring than going right to our Father-Mother for the most accurate view of how we are doing? Only good comes from consulting with God, the keeper of the law of progress.

Rebecca Odegaard is a Christian Science practitioner and teacher. She lives in Boston and teaches in New York City. 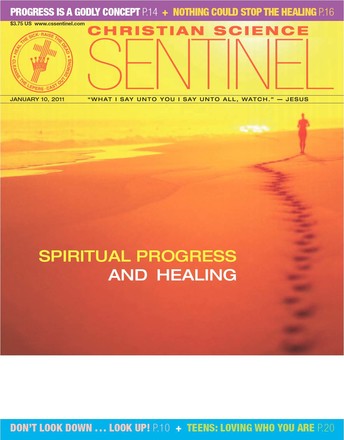 The blessing of ‘enough’

Research underway to determine Americans’ views on prayer and medicine

The triumph of Life

Your identity cannot be stolen

Progress is a Godly concept

Nothing could stop the healing

Your questions about church