It is easier to pull down than to construct. However, when so violent and unjust an attack as that of a writer in Le Progrès Civique of recent date is launched against Christian Science, which is practiced by thousands of people the world over, and the results of which they find entirely satisfying, both in their lives and in their health, it is meet that someone should have the courage to raise his voice in its defense. Was the book referred to by our critic, "The Faith, Falsity, and Failure of Christian Science," written with a view to discovering honestly the effect of Christian Science in the world, or was it written simply to find fault with it? I can affirm that sixty-two pages of closely printed matter, or ever sixty-two thousand pages of such printed matter, would not suffice to contain the testimonies of those who have been redeemed from sin and healed of disease through the ministry of Christian Science. What would the doctors say if their failures were published in the press? Yet in many instances they fail to save their patients. Have not we all, medical practitioners and Christian Science practitioners, one aim, namely, to relieve distressed humanity? Christian Scientists do not claim that they heal every case that comes to them any more than do the doctors; they know that as yet they are but in the vestibule of this Science, but they do not doubt that the all-power of divine Principle, God, can meet every human need.

Mrs. Eddy enjoins Christian Scientists to obey the laws of the land in which they may be living and, if the laws demand it, to report to the medical authorities any case of contagious disease. There are enthusiasts in every religion who lack common sense, but the true Christian Scientist will no more think of sending his child to school or to the movies before all danger of contagion is over than will anyone else. Mrs. Eddy's teaching on this point is perfectly definite.

To heal disease in Christian Science one must understand the relationship between man and God. If man is the image and likeness of God, he should express the nature of God. This nature is, according to the Scriptures, Life, Truth, and Love. It is true that as one understands this nature, one denies evil, disease, and death. How can the latter exist if God is infinite, if Life, Truth, and Love are infinite? The practitioner of Christian Science heals his patient by understanding and proving that he is in God's hands. He must realize for the patient that divine Life is the only Life, and that it is his Life; that the truth of being is absolutely harmonious; that divine Love enfolds him, protects him, loves him. Thus does the Christian Science practitioner heal his patients. When he denies the existence of evil and disease, he does so from the standpoint of the perfection of the spiritual creation.

It would be impossible to find a more exalted and pure teaching than that of the textbook of Christian Science, "Science and Health with Key to the Scriptures" by Mary Baker Eddy, and nothing contrary to it has ever been taught by her. As to the life of this noble woman, those who desire to do so may read her book "Retrospection and Introspection;" also "The Life of Mary Baker Eddy" by Sibyl Wilbur, and see for themselves what a great love for mankind impelled Mrs. Eddy to endure all manner of deep experiences in order to show mankind the way to a healthier life, and to the true understanding of the things of the Spirit. Doctors, almost without exception, now take the mental element into consideration in their treatment of the sick; but it is the divinely-mental element they should utilize. The humanly mental, so called, is what produces disease, the divinely mental alone can heal it. To utilize this divinely-mental power one must live according to the law of God, good. This is what Christian Science teaches. Finally, allow me to quote Mrs. Eddy's words on page 164 of Science and Health: "It is just to say that generally the cultured class of medical practitioners are grand men and women, therefore they are more scientific than are false claimants to Christian Science. But all human systems based on material premises are minus the unction of divine Science. Much yet remains to be said and done before all mankind is saved and all the mental microbes of sin and all diseased thought-germs are exterminated." 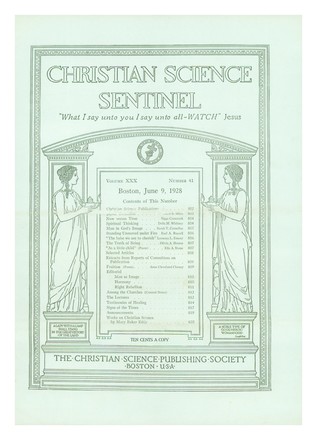 "The babe we are to cherish"

The Truth of Being

The letter in Time, March 26, purporting to be from...

In a letter by a doctor in a recent issue he again places...

It is easier to pull down than to construct

Reports of an evangelist's sermons, appearing in recent...

J. Latimer Davis, Committee on Publication for the State of Iowa, | June 1928

Extracts from Reports of Christian Science Committees on Publication for the Year Ended September 30, 1927