Several years before I became a member of The Mother Church of Christ, Scientist, I had an experience which I have often wished to record, yet I have hesitated because human language seems so feeble an expression of those things which we have seen and handled of the Word of Life. The help lately found in hearing a similar testimony from a friend has, however, prompted this present attempt.

It was at a crucial period of my life when, after a severe struggle, I had deliberately turned away from a temptation to wrong-doing, in spite of material and seemingly needed advantages to be gained thereby. Doubtless it was this definite victory of dimly-seen spiritual good over the "good-in-evil" of material sense that prepared me for what followed. The circumstances were such that it seemed the greatest battle I had ever won, but the immediate reward appeared to be nothing better than anxiety for my future and threatened nervous prostration. I had heard and thought a good deal about Christian Science, but had not persisted in my interest, and now turned to a doctor for advice. The doctor prescribed merely rest and the endeavor to be free from troublesome or exciting thoughts. In following these directions, I turned away from my worldly affairs, thought much of God, strove to be occupied with such peaceful things as the beauties of nature, hymns, and quiet books. One day there suddenly swept over me a tempest of grief for the sufferings of mortals,—the blind maze in which we seem to wander, the eager desires thwarted, our loveless lives, longing for happiness and righteousness, desiring to fulfil our true destiny, yet ignorant how. I "wrestled in prayer" for the first time in my life. It was as if I clasped the feet of Truth and would not loosen my hold till my questions were answered. The Lord was not in that whirlwind of importunity, yet I went to sleep that night, peaceful and happy. Then I seemed to dream that the pain in my head grew intense, and a terrible fear of death possessed me. I thought, in the dream, that my head would burst. Then I seemed to say, "Well, if it does burst that can't hurt me; nothing can harm me." It was as if I defied the physical condition to do its worst, reasoning that it could not hurt my real life. When I awoke a voice was echoing clearly in my thought, "Can't you trust Me?" It was the answer to my prayer for light. The pain was all gone, I was unutterably at peace, and words cannot tell what I knew in that hour of the present actuality of God's love.

I had doubtless heard the statement of Christian Science that all suffering is a dream of material sense; and now I could look down the vista of years and see that every suffering, sinning sense that had ever darkened thought had been a dream, an illusion,—nothingness. I realized the presence of God a thousand times more clearly than I had ever felt a human presence. This consciousness was with me for several days. I felt that I knew what Jesus meant when he said, "I knew that thou hearest me always." I devoured the Bible with breathless delight, saying, "This is what these men were trying to tell us." I said, "I know the truth of the truth; it is not a far-off vision of poets and seers; it is real and it is here." The joy of the experience was natural and serene. I was sure that it was man's normal consciousness, and concluded that many people, perhaps all Christians, knew this present Love which had but just been revealed to me; but my friends looked at me with wonder, and had no experience to corroborate mine. Gradually I came back to the consciousness which mortal mind claims to be normal, wherein matter is more substantial than God. I concluded that there was no definite way to get back again into that light, that such a consciousness of God could come only at a period of great moral conflict and victory, together with a cessation of any concern over material affairs. I did not then realize that the way to the "secret place of the most High" had been made plain in Christian Science, that we could find and follow it through Science instead of suffering. When we know material sense and all evil to be illusion, we may by daily, definite work "annihilate hallucination," as our Leader bids us (Miscellaneous Writings, p. 3), and at last reach the pure consciousness of God's ever-presence. This is the true aim of the Christian Scientist. The evidences of physical healing that come to us are but signs to show that we are coming to abide in Him. The evil dreams of materiality are one by one destroyed by this blessed Christian Science, whereby we know how.

Our gratitude is great to her who has shown us the way of Jesus. It would fairly make our hearts ache with the longing to repay her, did we not know that she is reaping the harvest she has sown—the harvest ever ripe—and needs no human recompense. May the light of Love shine upon her unto the perfect day! 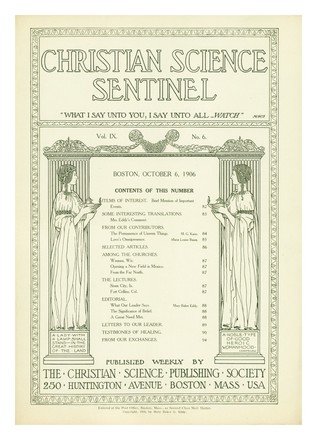 THE PERMANENCE OF UNSEEN THINGS

Jesus was a practical idealist in a spiritual sense; he...

Under the heading "Sermons in City Pulpits," in your...

with contributions from William B. Johnson | October 1906

LECTURE IN THE MOTHER CHURCH OF CHRIST, SCIENTIST

WHAT OUR LEADER SAYS

THE SIGNIFICANCE OF BELIEF

As it is a little over a year since my attention was directed...

As I never seemed to be strong from childhood, I was...

It does not seem possible to tell of all the benefits I have...

It is over five years since I heard of Christian Science