The belief that Christian Science is “mind over matter” is a misconception. Instead, far from advocating the human mind as a healing agent, Christian Science explains how the power of divine Mind, God, conquers fear and its resultant illness and brings healing to the body. Mary Baker Eddy herself did not have much good to say about the action of the human mind. She wrote in her seminal work, Science and Health with Key to the Scriptures, “We should understand that the cause of disease obtains in the mortal human mind, and its cure comes from the immortal divine Mind” (p. 174).

What is this divine Mind? It is the infinitely good and wise God, Spirit. The designation of God as Mind has its origin in the Bible. For instance, Psalms 147:5 states, “Great is our Lord, and of great power: his understanding is infinite.” And in Proverbs we read: “Trust in the Lord with all thine heart; and lean not unto thine own understanding. In all thy ways acknowledge him, and he shall direct thy paths” (3:5, 6).

Far from advocating the human mind as a healing agent, Christian Science explains how the power of divine Mind, God, conquers fear and its resultant illness.

Actually, this second passage is a good definition of prayer. Prayer in Christian Science is turning to God and acknowledging the presence and power of Deity. In this spiritual understanding, our true being as man in God’s image and likeness is revealed to human consciousness. Since God is Spirit, man must be spiritual, made of the substance and qualities of God. It is not a question of mind over matter, but a yielding of fear and ignorance to the divine Mind’s understanding of our spiritual selfhood as the child of God. This brings health and resolution to the human situation.

For example: When I was in high school, I played clarinet in a jazz ensemble. One night we were playing at a local VFW Post filled with cigarette smoke, and during the performance, I became very ill. At a break, I decided to find a quiet place to sit down. I thought about the Lord’s Prayer. I knew that this prayer is not simply a petition to God, but is also an acknowledgment of His ever-present omnipotence. I sat there and quietly contemplated the ideas in that prayer very slowly, thinking about each line for a while before going on to the next. I thought about what those words must have meant to Jesus as well as what they meant to me.

The last words of the Lord’s Prayer are “For Thine is the kingdom, and the power, and the glory for ever” (Matthew 6:13). To me that meant I was in the kingdom of God, in His holy presence, even in this smoky, loud, unfamiliar place. It also meant that because I was God’s child, the only power I could feel was the divine presence of peace, joy, and health. Finally, it meant that the glory of the spiritual dominion God gives to all of His children—dominion over fear, uneasiness, or illness—was mine, since man is spiritual, not material.

This was far from being a mental exercise. It was yielding to the ideas divine Mind was presenting to me at that instant. At another time, the spontaneity of prayer might bring different ideas. Prayer is not a rote repetition of words; it is divine inspiration.

Prayer is not a rote repetition of words; it is divine inspiration.

In a short while, a comforting feeling came over me. And by the time I had finished praying, I was well. I played with the ensemble the rest of the night with no discomfort at all. This certainly was not a case of willing myself well. Human will is never strong enough to do that. But even though I had felt very ill, I was able to yield to the divine power of God, Mind—to feel His reassurance of my true, spiritual identity and let that heal me.

Jesus’ healings were not accomplished by willing others to live or get better. He described the state of thought necessary for following him in this life of Christian healing when he said: “Come unto me, all ye that labour and are heavy laden, and I will give you rest. Take my yoke upon you, and learn of me; for I am meek and lowly in heart: and ye shall find rest unto your souls” (Matthew 11:28, 29). It was Jesus’ meekness, his willingness to be a transparency for the power of God, that made him such a successful healer.

The following words have been a great help to me in the many years that I have been practicing Jesus’ Christian healing as taught in Christian Science: “Teach the meekness and might of life ‘hid with Christ in God,’ and there will be no desire for other healing methods” (Science and Health, p. 445).

While the Christian Science Church does not dictate what kind of treatment its members may receive when ill, Christian Science certainly does present a wonderfully powerful form of prayer that has been effective in the healing of disease for over a hundred and fifty years. It is not mind over matter. It is the power of God, divine Mind, over fear, disease, sin, and trouble of every kind. 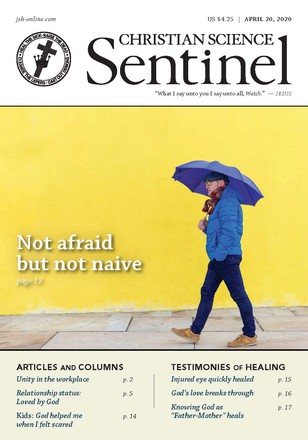 Unity in the workplace

How I prayed about a wildfire

Not afraid but not naive

God helped me when I felt scared

By Nikki Paulk with contributions from Stephen Paulk | April 2020

Not what I appear to be