Let us not believe that we have to go through life burdened, suffering, or threatened with failure, for this is not so.

Consider the experience of Peter, Jesus' disciple. He was imprisoned, in chains, and heavily guarded by King Herod's soldiers. "But prayer was made without ceasing of the church unto God for him," we read in the Bible. "And, behold, the angel of the Lord came upon him, and a light shined in the prison: and he smote Peter on the side, and raised him up, saying, Arise up quickly. And his chains fell off from his hands." Acts 12:5, 7;

It is prayer, pure and selfless, that reveals to us the angels of divine Love, the spiritual intuitions or angel messages from God that can lead us to our freedom.

We may insist that we have been praying very earnestly, but can we not be more instant in our praying, more decisive and vehement?

Sometimes the suggestions of materialistic belief may tempt us to be a little lazy, to follow a lukewarm course and try just to skirt the edges of Science—only half believing. Sometimes we may find ourselves saying, "I feel full of doubts. I can't seem to get a solid hold of any truth." Or perhaps the argument "What's the use?" may pound at the door of our consciousness. At such times we particularly need to heed the rousing angel truths of Christian Science that can stir us to arise up quickly and claim a stronger sense of divine power!

A review of fundamentals always helps. Certainly there exists something basic and ultimate beyond which one cannot go, an absolute and primal cause of all true actuality. In Christian Science, we know this power to be God, the universal creative Principle, the infinite I AM, or conscious ever-presence, utterly intelligent, orderly, harmonious, beneficent.

Where does all the misery come from? The discord, injustice, destruction, war? These are part of the whole general system of false material belief—a poor concept indeed, compared to what divinely exists.

When we look out from the standpoint of the divine, what do we see? We see man in his God-conceived nature, not a suffering, warring mortal defined by a matter-body but God's immortal idea, a hallowed and holy thing, loved as only a perfect Father-Mother can love him and cared for as only the tenderest ever-presence can care for him.

Then we can claim for ourselves the understanding of body as spiritual consciousness, the reflection of infinite, eternal Mind, perfect in every department and respect. No poison there, no abnormal accumulation, obstruction, disorder, deterioration. Only the substance of Spirit expressing itself, harmoniously operative, painless, ageless, at ease and immune to the mesmeric suggestions of evil.

Does not each individual, in his divine nature, have his own God-appointed orbit in the systems of Mind? He does indeed. And do these orbits ever interfere with each other? Never. They exist in perfect relationship and constitute one harmonious whole, unfolding in boundless blessings for all. Then shall we not rise up and assert these truths with assurance?

Such prayer in Christian Science entertains the Christ, the true idea of God which Jesus exemplified. We need to know, without the shadow of a doubt, that this Christ, or Truth, governing our consciousness, is operating as a law of prompt healing and harmony to our human experience.

Notice the verbs which are used by Mary Baker Eddy in the following quotation from Science and Health with Key to the Scriptures: "Blot out the images of mortal thought and its beliefs in sickness and sin." Later the Discoverer and Founder of Christian Science continues: "Instead of blind and calm submission to the incipient or advanced stages of disease, rise in rebellion against them. Banish the belief that you can possibly entertain a single intruding pain which cannot be ruled out by the might of Mind, and in this way you can prevent the development of pain in the body." Science and Health, p. 391;

This, then, is what we must do with all of mortal mind's discordant claims—"rise in rebellion" against them, "blot out," "banish" them! These are strong words. They rule out halfheartedness, discouragement, delay, and the temptation to surrender to evil. They remind us of the angel that smote Peter on the side and said, "Arise up quickly"!

Sometimes, where the emotions are deeply involved, instant rejection seems difficult. Error's voice tries to tell us that there is some morbid satisfaction—and the mortal sense of self is somehow appeased—in losing one's temper, in rehearsing misfortunes, in indulging false pride, bitterness, self-pity, sin.

"Arise up quickly"! the angel said. Treat these thieving suggestions of evil as the impostors that they are. Blot out and banish them! Refuse—alertly, vigorously, persistently—to be mentally intimidated or mesmerized by the world's false mortal concepts. No matter what mortal sense is claiming, we can rise up instantly, in Love's strength, to the altitude of perceiving, right where the discordant and unworthy may seem to appear, the totality of infinite Mind and its infinite harmonious manifestation, forever untouched by evil.

The benefit of this line of thought was brought home to me in an incident that occurred during World War II. While helping to harvest corn, I fell under the heavy half-loaded corn-wagon, and one big metal-rimmed wheel passed over my leg, ankle, and foot.

In that moment of shock, the words "Get up"! seemed to ring in my ears, much as the angel's words "Arise up quickly" must have stirred Peter. I did arise quickly, and then, refusing vehemently to lose consciousness, to look at the leg, or to limp, I started the long walk back over the rough field to the farmhouse.

When a sense of shock and faintness became almost overpowering, and the suggestion, "You've been run over, run over, run over," kept repeating itself, Mrs. Eddy's words interpreting the last phrases of the Lord's Prayer, "For thine is the kingdom, and the power, and the glory, for ever," Matt. 6:13; came as an angel message: "For God is infinite, all-power, all Life, Truth, Love, over all, and All." Science and Health, p. 17; God, Love, over all! Then, with a flood of gratitude, came the realization: So, in reality, nothing has ever been over me but divine Love! Instantly consciousness cleared, strength returned, and strenuous farm work was resumed. The slight swelling and stiffness that remained were soon gone completely.

Remember, the angel did not desert Peter after smiting him on the side and commanding him to "arise up quickly." We are told, "When they were past the first and the second ward, they came unto the iron gate that leadeth unto the city; which opened to them of his own accord." Acts 12:10.

In the same way, God's loving messages can stir us to arise quickly and go forward. They can lead us from one step to another in progress until we too can see even what seems like a closed iron gate in our experience swing open to us of its own accord, as it did for Peter, and we can find ourselves beyond it, whole and free! 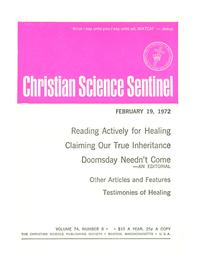