In 1981, I found myself sentenced to prison for one to six years, as the result of a crime that I committed while under the influence of drugs. While serving my sentence, I had plenty of time to reflect on my lifestyle. I sincerely wanted to straighten out my life. During my stay at a prison in upstate New York, I went to a chapel service conducted by Christian Scientists, and there I obtained a copy of Science and Health with Key to the Scriptures by Mary Baker Eddy. This was the only service that I ever attended during my incarceration because I was transferred to another prison where Christian Science services were not held.

At first, some of the ideas seemed abstract, but as I continued to read, I began to understand the concepts explained in the book. All of the depressing thoughts that I had had gradually disappeared. The book gave me more hope; it gave me a better understanding of what I could accomplish with the help of God. I noticed that my attitude gradually changed.

In prison, there are many ways of expressing Christian love toward fellow inmates. I became more conscientious; I expressed more patience and tolerance. I also noticed that I began to use less profanity until, gradually, I didn't use profanity at all. I also learned the importance of reformation, and as I learned this, I became more confident that God did not make a criminal nor a sinner. I began to realize that I would be healed of the weaknesses that caused me to commit sin. I didn't know how or when, but I knew that I would be healed.

One idea from Science and Health that I held to states: "This conviction, that there is no real pleasure in sin, is one of the most important points in the theology of Christian Science. Arouse the sinner to this new and true view of sin, show him that sin confers no pleasure, and this knowledge strengthens his moral courage and increases his ability to master evil and to love good."

After continuously reading one hundred pages a day of Science and Health for about six months, all desire to smoke cigarettes and drink coffee, and the craving to use drugs, just vanished. These healings occurred simultaneously, and the desire for drugs, coffee, or cigarettes has never returned. I am extremely grateful that I used the time that I had in prison constructively, because I gained a better understanding of Christian Science, and this understanding has enabled me to practice Christian Science successfully subsequent to my release.

I am happy to vouch that my husband's testimony is genuine. When we met, he had just recently been released from prison. He admitted immediately that he had been incarcerated. I found this incredible because he was so kind and polite! In fact, he had to show me his parole release before I would believe him. He attributed his reformation to the study and practice of Christian Science. I had heard of Christian Science, having attended college in Boston, but I was unfamiliar with its teachings.

I was attracted to the sense of calmness that Louis exhibited, and I wanted to experience it too. Now I know that what I sensed was the Christ, Truth. I am happy to say that as a result of our courtship, I began to study Christian Science. Before long I was attending church services, and eventually I joined The Mother Church and a branch church.

Christian Science has enriched our lives immensely, and we are extremely grateful to Mrs. Eddy for sharing this wonderful, healing truth with mankind. 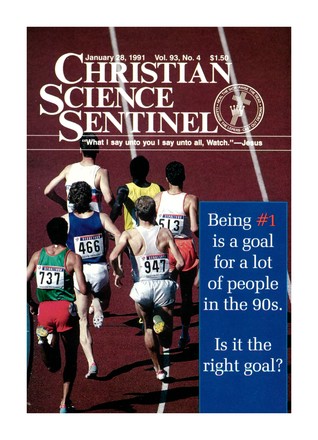 When we feel our life has been wasted

Facing each day without fear

It's time to hear about your healings

Is fighting the temptation to sin really worth it?

Who heals? Who can be healed?

Put out that fire!

By Louis Fuentes with contributions from Dallas Fuentes | January 1991

When it was time to renew my driver's license, a fault was...

I am very grateful for an experience I had during a school...

By Andy Louis with contributions from Rodney Brian Louis | January 1991

I would like to tell, with gratitude, the story of something...