Significant tensions have long existed between Taiwan and the People’s Republic of China, but the reason for these tensions is hidden in the past.

Following the Communist victory in mainland China, two million Nationalist Chinese—the Kuomintang (KMT)—fled to Taiwan in 1949 and established their own government. Declaring the Communist Chinese government illegitimate, the KMT claimed to be the government of China, as well as of Taiwan. China, meanwhile, has continued to claim sovereignty over Taiwan.

These tensions still exist. After over 50 years of independence, the Taiwanese see their island as independent and autonomous. China disagrees and attempts to block Taiwan from participating in international organizations as a separate entity. Given its size and economic power on the world scene, China often succeeds.

This pressure from China has made Taiwan’s status in world trade, diplomacy, and politics ambiguous—seen neither as a truly independent nation nor as a province of China. Taiwan no longer has representation in the United Nations. That chair was taken by China in 1971. Taiwan only recently received “observer status” at the UN, under the name “Chinese Taipei.”

Still, there have been positive steps. Economic relations between China and Taiwan have improved in the last year or so, and direct travel has resumed. It seems as though they may be putting aside some of the sovereignty issues in favor of maximizing trade relations. China’s recent refusal to export rare earth metals, however, seriously affected the economies of many countries that manufacture or design high-tech products, including Taiwan.

Military tensions between the two countries are still high, as among other things, the Chinese have a number of ballistic missiles along the Taiwan Strait.

The story of David and Goliath in the Bible is an object lesson that material size and power don’t necessarily determine outcomes (see I Sam. 17:20–50). The story’s message is that trust in God is ultimately what decides who will rule a kingdom. Israel had long been troubled by its enemies, the Philistines, and they were terrified of the Philistines’ champion, a giant named Goliath.

But when David visited his brothers, who were in the Israelite army, he had no such fear. David’s trust in God, and his prior experience as a shepherd, had shown him that God would be with him. He was no soldier, but still could declare, “The Lord that delivered me out of the paw of the lion, and out of the paw of the bear, he will deliver me out of the hand of this Philistine” (I Sam. 17:37). Through his confidence in God, David defeated Goliath and gave the Israelites victory.

This account helps lift away the fear that one small country will be victimized by a giant nation. What seems needed is the trust that God will protect and defend all the parties involved by bringing to light the relevant spiritual facts.

One such fact is that God’s kingdom is spiritual, so it isn’t tied into a certain landmass or to long-past history. Our recognition that the divine government has priority over all governments—including China and Taiwan—helps lift the discussion out of materiality and into a higher understanding of how God’s love operates. Where there appears to be ambiguity and fear, our prayers can be directed toward inspired solutions that meet everyone’s needs. Those prayers can support officials and individuals working for peace between these two important nations so they can hear God’s leading, and then fearlessly follow.

Such prayer can also alleviate the ambiguous nature of Taiwan’s political situation. Rather than accepting that a nation can be deprived of its identity, and that its status can be made ambiguous, we can insist that the light of the Christ, Truth, is always available to anyone, anywhere on the globe. This is a spiritual fact; and we can trust the Christ to bring to light right relationships among the nations. The always present and powerful truth, of which the Christ speaks, eliminates uncertainty about identity and purpose.

In Science and Health, Mary Baker Eddy defines Christ as “the divine manifestation of God, which comes to the flesh to destroy incarnate error” (p. 583). The expression of God as Truth, then, is on hand to destroy any belief that relationships between countries require a winner and a loser, an oppressor and an oppressed. The law of God, of Spirit, is ever present and totally able to displace matter-based confusion with clarity and good. All-powerful good is greater than military threats, greater than an economy that might appear in danger from another power, and greater than an historically unbalanced relationship between countries.

No government, not even China’s, is larger than Truth, and no country or individual aligned with good is weak. God, Truth, imparts knowledge to the men and women of His creating. God also reveals to us what we need to know, when we need to know it, and in a form that can be understood. No one, not even the tiniest or the largest country, is left out of God’s complete care.

Nor can one country deprive others of needed good. China’s policy on rare earth minerals is just one facet of a growing demand for resources that seem to be rare or diminishing. Yet, this too can be addressed in prayer that acknowledges the spiritual nature of creation. If we start with the idea that all resources are gifts from God, whose creation is infinite, we’re starting in the right direction. If we start from any other direction—such as focusing on scarcity, hoarding, and political mistakes—we aren’t going to reach a spiritual, healing conclusion.

Speaking of the man God made in His likeness, the Bible says, “God blessed them, and God said unto them, Be fruitful, and multiply” (Gen. 1:28). I love that “God blessed them.” This blessing is for all whom God made, including those we may perceive as different from our culture. We can pray to know that God’s blessing paves the way for each country and its people. This blessing includes intelligence to know just which large or small activities to implement, which to curtail, and how to trade with others so that all benefit.

Where there is temptation to hoard a product or to block access to needed resources, God as Principle, the All-in-all, can lift this fear. The law of Principle operates as God’s goodness to humanity in a tangible form, and will provide a response to each human need.

Divine Principle can impel change, reveal inspired ways of working together, eliminate long-cherished resentment and mistrust. God’s law of good never leaves one bereft of what’s needed. Science and Health explains that man “is the compound idea of God, including all right ideas” (p. 475). There is a right idea to answer any need, and prayers that acknowledge God’s presence can result in practical solutions to Taiwan’s economic issues and its relation with China.

In my own prayers, I’ve seen that it’s essential to clear out reliance on or fear of any country’s government and place one’s faith in God’s law of good. His unconditional, ever-present care for each of us is tangible and present, and we can trust that “He knows the angels,” or spiritual inspirations, that we need, and sends them to us (see Christian Science Hymnal, No. 9).

Science and Health makes a helpful point when it says, “The history of our country, like all history, illustrates the might of Mind, and shows human power to be proportionate to its embodiment of right thinking” (p. 225). Knowing that the might of Mind can impel right thinking in every situation will provide clarity regarding the national and international status of Taiwan. It will lead to a more secure economy, and a lessening of military tensions in the region.

The last line of the Lord’s Prayer is a good guide to trust: “For thine is the kingdom, and the power, and the glory, for ever” (Matt. 6:13). Jesus’ requirement that we trust in God as he did offers a perfect way to address the question of who is in charge of the “kingdom,” (including the “Middle Kingdom,” as China is often called). Mrs. Eddy’s interpretation of that last line in the Lord’s Prayer says, “For God is infinite, all-power, all Life, Truth, Love, over all, and All” (Science and Health, p. 17). There is only one kingdom—and it’s divine.

Prayer for a balanced approach to the relationship between Taiwan and China can include emphasis on God being the “all-power” to rely on. We can fearlessly trust that the “all-power, over all, and All” is benign, balanced, even-handed, and abundantly caring for the citizens in both countries. 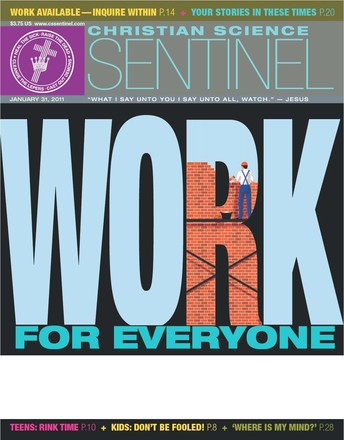 Each of us is needed

The rise of Christianity in Korea—a modern phenomenon

God’s message is all good

Prayer for the congregation

China and Taiwan: time for healing

Looking for work? Start with prayer

Connected to God—in business, and in life!