A deeper kind of study

I was a university student, sitting on the back of a Cadillac convertible, when I first saw the words Christian Science.

I was waiting for our homecoming parade to begin and I noticed attractive books and chairs through the windows of a Christian Science Reading Room. I didn’t inquire about it; however, the words Christian Science kept popping up when later on I used The Christian Science Monitor to help research a topic I was focusing on for my degree. My only other connection to Christian Science during college was through a friend of my mother’s, and while I did not spend much time with her, I was impressed with her calmness and joy.

A decade later, I found myself struggling with many problems, and a serious concern for my true purpose in life. I had been told by an optometrist that there was a high level of pressure in my eyes, a trait associated with glaucoma, and that I would need to use eye drops for the rest of my life. My husband was rarely home, staying out all hours of the night. My employer was behaving harshly toward everyone she supervised. And my mother, who lived in another state, had a drinking problem, so I could not confide in her. I felt hopeless and alone.

At this time, I had moved into a new home and discovered that my neighbor was a Christian Scientist. I watched her from my kitchen window as she sang and joyously greeted everyone in the neighborhood. At one point I called a local minister about my problems, but he said he could not help me—so I visited my neighbor and asked her about her religion. She became my best friend, and more like the mother I never had. I told her about the medical diagnosis and about how scared I was. When she gave me some Christian Science periodicals to read, I couldn’t get enough. I remember when she read to me the first page of Science and Health with Key to the Scriptures by Mary Baker Eddy: “To those leaning on the sustaining infinite, to-day is big with blessings” (p. vii). This idea brought tears of gratitude to my eyes because I realized it was what I had been searching for since I was a young child. Soon after, I asked a Christian Science practitioner to help me pray. I don’t recall all the things she said during our first visit, but I do remember the comfort I felt as she read “Mother’s Evening Prayer” by
Mrs. Eddy to me (Poems, p. 4). Each verse felt like it had been written just for me.

My marriage did dissolve, but I was able to buy my own condo, as well as transfer to a better job location, and later on I happily remarried. And a year later, when I went to a different optometrist, I was told there was nothing wrong with my eyes. From all of this I grew to know that God was my true parent, friend, and deliverer.

Several years later I joined a branch church and The Mother Church, but I longed for and felt the need for a deeper study of Christian Science. One way I knew I could do this was to take Primary class instruction, a two-week class taught by a Christian Science teacher on how to become a better healer and how to strengthen your spiritual awareness using the Bible and Science and Health.

That spring I went to a public lecture given by a teacher of Christian Science. I actually had all kinds of excuses for not going, but I listened to that “still small voice” (I Kings 19:12) from God, and arrived at the lecture on time. My attention stuck like glue to every word the lecturer spoke, and I knew this man was to be my teacher. Those two weeks of class instruction changed my life, and even though I took class 30 years ago, I will never forget him saying, “You will have what you need, when you need it.”

Not only have my husband, family, and I had numerous blessings and healings, but later on, I realized that my true purpose in life is to help others by being in the full-time healing ministry, as Christ Jesus urged us to do. Now the words Christian Science are more than just letters printed on a building. They represent a “practical, operative” way of life (see Miscellaneous Writings 1883–1896, p. 207). I am so grateful for Mrs. Eddy’s tireless dedication to bringing this final revelation to the world.

Send a comment to the editors
NEXT IN THIS ISSUE
Bible Translations: Old & New
For understanding and fresh insight 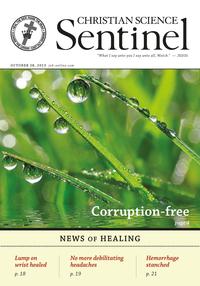