A Christly defense against evil

Today it appears that the very essence of democracy is under siege around the globe, and the high moral standards needed to support it are being threatened. The moral qualities of honesty, fair dealing, and integrity are being challenged by the encroachment of pseudo values that appear attractive and in vogue, but which undermine the very freedom democracy promises.

It seems the time has come to take a stand against all that would undermine the moral values that are necessary to ensure real progress for individuals and society. The uprisings and demonstrations by citizens against oligarchies and unjust laws certainly speak to a growing courage to take that stand. Undeniably, a strong defense against the claims of evil is much needed. Yet, at the same time, it is evident that the traditional call to arms—the building up of military might—is not the final answer to the longing for peace, for what is right and good for all.

We might wonder, What is required to defend against the invasion of evil and to secure lasting freedom? The only viable answer is spiritual warfare—with the power of God’s omnipotent goodness as its weapon—to defeat evil at its inception in human consciousness. This requires a heartfelt mental argument for the supremacy of good. This is the invincible might we learn of in the Bible and in the teachings of Christian Science.

Consider Mary Baker Eddy’s timely admonition in Science and Health with Key to the Scriptures: “Christian experience teaches faith in the right and disbelief in the wrong. It bids us work the more earnestly in times of persecution, because then our labor is more needed” (p. 29).

To successfully challenge the enemy—evil—we must realize that evil is not an actual, powerful entity; it is not a person or persons. Rather, the enemy is a belief in the power of evil, often a widely held belief. Sometimes it appears as a threat to our safety and well-being. Other times it masquerades as an intoxicating allurement that would ensnare the unwary into sin—into acts of dishonesty, greed, domination, and even violence.

Whatever form evil takes, it always begins as a suggestion in thought, and, when believed, grows into a mesmeric delusion that boasts destructive results for its victims and its perpetrators. But suggestions of evil need a believer to give them force, for without a believer they have no life or influence.

The need, therefore, is to intelligently disbelieve evil’s spurious claims. This requires the recognition that the infinite goodness of divine Love is the only actual power and reality of being. This recognition is the essence of effectual prayer—the ammunition necessary to defeat the aggressive suggestions and impressions of evil.

Through prayer we deploy righteous weapons, the power of “faith in the right and disbelief in the wrong” that Mrs. Eddy speaks of in the passage quoted above. And this deployment disarms—in human consciousness—the aggressive suggestions of a power opposed to good.

The enemy is a belief in the power of evil, often a widely held belief.

Realizing this, we can eradicate the so-called enemy, evil’s deceptive portrayals of a world in turmoil. The threat of disease, financial troubles, or any of the many false claims of negative mortal belief must first be met in our own thoughts in order to promote healing in society. In Science and Health we find this encouraging call to action: “Rise in the strength of Spirit to resist all that is unlike good. God has made man capable of this, and nothing can vitiate the ability and power divinely bestowed on man” (p. 393). And this directive is underscored by another admonition: “Every mortal at some period, here or hereafter, must grapple with and overcome the mortal belief in a power opposed to God” (p. 569).

Turning to the Holy Bible, we learn fundamental lessons about the omnipotence of good from those who have gone before us. The story of David and Goliath teaches such a lesson. David was but a lad when he volunteered to face the Philistine giant Goliath, who appeared bent on wiping the Israelites off the face of the earth. David was not equipped with the traditional armor of Israel’s warriors; he chose to face the giant with the defense he had already proved—his deep faith in God.

We know the outcome of the story. David ran to meet Goliath and prevailed over the bragging so-called power that claimed it could dominate the God of the Israelites—the God whom David had come to understand as infinite goodness and love. What an inspiring example of the willingness to courageously take up arms against the threatening powers of darkness, and so prove the omnipotence of good.

Prayer that brings results helps reveal the intricate pretenses of evil and refutes them with the truth of God’s infinite power and love for man. Such scientific prayer lifts thought above the belief of the battle of one personality, one faction, or one country against another, and claims the affirmation of good over the assertions of evil. In this way the opposition to good is destroyed in one’s thinking, and the omnipotence of good is made evident as healing.

The kind of unwavering trust in God’s protective ever-presence displayed by David is expressed in the 91st Psalm: “He shall cover thee with his feathers, and under his wings shalt thou trust: his truth shall be thy shield and buckler” (verse 4). And further along the psalm includes this promise: “Because thou hast made the Lord, which is my refuge, even the most High, thy habitation; there shall no evil befall thee, neither shall any plague come nigh thy dwelling. For he shall give his angels charge over thee, to keep thee in all thy ways” (verses 9–11).

The infinite goodness of divine Love is the only actual power and reality of being.

If there was ever a time to respond to the directive to rise in the strength of Spirit and grapple with the mortal belief in a power opposed to God, it is now. The call to arms is a call for deep, heartfelt prayer—to uplift the standard of Truth in our thinking and courageously challenge all that is unlike God. Every God-loving, prayerful heart must take up arms against the Goliaths of today, and lift thought into the ever-presence of divine Love perfectly governing all.

We might each ask ourselves, How do I pray in the face of such aggressive threats believed and feared by many? Jesus’ words as recorded in Matthew give us direction: “When thou prayest, enter into thy closet, and when thou hast shut thy door, pray to thy Father which is in secret; and thy Father which seeth in secret shall reward thee openly” (6:6).

No equivocation or doubt can be found in Jesus’ words, but rather an absolute conviction that one’s sincere desire, taken to the Father of all, will be heard. And when we pray, we can trust that, as Jesus promised, “What things soever ye desire, when ye pray, believe that ye receive them, and ye shall have them” (Mark 11:24).

Let us trust, then, that our sincere and righteous prayer will be effective. As we read in Science and Health: “The good you do and embody gives you the only power obtainable. Evil is not power. It is a mockery of strength, which erelong betrays its weakness and falls, never to rise” (p. 192).

In our prayer, we can recognize that it is divine Love that destroys hatred, and we can let that Love be reflected in the moral courage that faces down the boastings of evil, charitableness that mitigates selfishness, and humility that dissolves false ambition and aggression.

The infinitude of God’s goodness, understood and expressed, destroys evil’s claim to a place in God’s universe. It is the deployment of Christly qualities, and an absolute faith in our heavenly Father’s all-embracing care for His children, that can defeat whatever threatens the peace and prosperity of humanity. 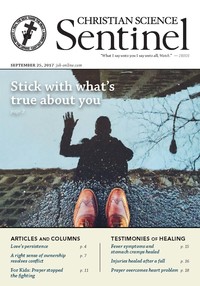