What was it in Noah's character that ensured his safety? The Bible tells us that "Noah found grace in the eyes of the Lord," that he "was a just man and perfect in his generations," and that he "walked with God." vv. 8, 9; Noah, in other words, was a man of great integrity and quiet spiritual sense. He apparently refused to succumb to the self-seeking, material life of much of the rest of the community. His saving quality was that he "walked with God."

Noah must often have appeared to those around him as a man alone, a man possessed by a motivation others could not comprehend. He must have been mocked and jeered at—imagine building an enormous boat on dry land, with not a drop of water in sight! But wasn't his aloneness—his all-oneness with God—the quality that protected him and those within his care? In the same way our unity with God, daily affirmed, cherished, and practiced, will lift us, and will help lift those within the sphere of our outreaching thought, above the waves of material currents and mesmeric attractions.

Noah was primarily a man of integrity, a quality that seemed sadly lacking in those around him. A study of some of the Bible references to integrity is illuminating. These references show what a vital saving quality it is. For example, "Let integrity and uprightness preserve me," Ps. 25:21; and, "Thou upholdest me in mine integrity, and settest me before thy face for ever," 41:12; and, "The integrity of the upright shall guide them." Prov. 11:3; Integrity implies completeness, being undivided and unbroken, being whole or entire.

So it was Noah's integrity, his quality of being complete, undivided, at one with God—of walking with God—that saved him. His closeness to God enabled him to hear God's voice, to spiritually discern facts that were not apparent to the material senses. Those around him had become apathetic in their own self-ease, stupefying materialism, and self-satisfaction.

Noah received specific instructions for the building of his ark. It is interesting to note that God did not give him an ark; he had to build it. We also have to build the ark. And the building has to be detailed and dedicated as Noah's. Only then will it both protect these inside and be strong enough to ride the storm outside. Mrs. Eddy's definition of "ark" reads in part, "Safety; the idea, or reflection, of Truth, proved to be as immortal as its Principle; the understanding of Spirit, destroying belief in matter.

"God and man coexistent and eternal." Science and Health, p. 581;

How are we to build this "understanding of Spirit, destroying belief in matter"? Surely, with the specific instructions and example of our Way-shower, Christ Jesus, and with the book that opens up the treasures of the Bible and its spiritual meaning, Science and Health by Mrs. Eddy. These are well-tried, widely-proved building materials able to withstand any floods perpetrated by the carnal, or mortal, mind. The greater the flood, the higher the ark will rise.

Daily and hourly the building of our ark must be of overriding, impelling importance. Nothing should detract us from this work. Don't let us be tempted just to look at the blueprints of the ark and think how lovely they are, and wait perhaps for someone else to help us build it—or even to build it for us! Using the blueprints and building with them, we will give attention to every detail and instruction. Practicing and using the truth contained in our textbooks, the Bible and Science and Health, we'll love it and live it. We can mentally take those in need in our world—the hungry, the homeless, the hijacked, the poverty-stricken, the bankrupt—with us into our ark, for only there can we see "God and man coexistent and eternal."

Mrs. Eddy clearly foresaw the needs of today when she wrote, "The breaking up of material beliefs may seem to be famine and pestilence, want and woe, sin, sickness, and death, which assume new phases until their nothingness appears." On the same page she continued, "As this consummation draws nearer, he who has shaped his course in accordance with divine Science will endure to the end." And in the next paragraph she summed it up: "During this final conflict, wicked minds will endeavor to find means by which to accomplish more evil; but those who discern Christian Science will hold crime in check. They will aid in the ejection of error. They will maintain law and order, and cheerfully await the certainty of ultimate perfection." ibid., pp. 96–97; What a wonderful goal for ark-builders!

Our world can be be saved and healed by Noahs. Let us make sure that our ark is big enough to include all mankind, and strong enough to resist the onslaughts of materialism. Then we can rejoice in Mrs. Eddy's assurance (explaining Rev. 12:15, 16): "What if the old dragon should send forth a new flood to drown the Christ-idea? He can neither drown your voice with its roar, nor again sink the world into the deep waters of chaos and old night. In this age the earth will help woman; the spiritual idea will be understood. Those ready for the blessing you impart will give thanks. The waters will be pacified, and Christ will command the wave." ibid., p. 570. 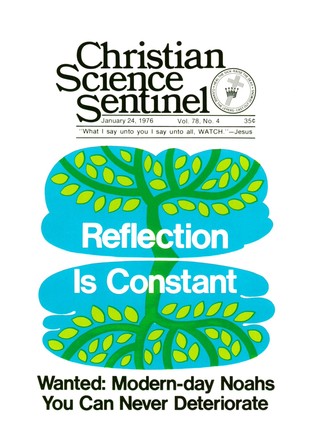 Is Existence Just a Dream?

Discouragement? No, Thank You!

The Consciousness of God's Care

A Mission for Each

You Can Never Deteriorate

It was late in the nineteenth century, about ten years after the...

By Dorothy L. Paulsen with contributions from Corin Mitford, Valerie I. Mitford | January 1976

As a child raised in a Christian Science family I saw many...

About eight years ago, after a very unhappy personal experience,...

The love and care of our Father-Mother God for His children...