Unseeing a Discordant Past

Man's true history is in the record of his spiritual existence as God created him. It is good and harmonious throughout since, as the Bible says, "God saw every thing that he had made, and, behold, it was very good." Gen. 1:31; Only that which God made has reality. "All things were made by him; and without him was not any thing made that was made." John 1:3;

God never made illness, unhappiness, death, and so they have no part in man's real history. Only qualities of God such as health, joy, and life are included in man's true being. The fact is that nothing erroneous has ever existed in the spiritual kingdom. God's law of harmony governs every situation, and it is important to know that this law has always been in operation and always will be.

Only in the realm of the mortal belief, or dream, has error appeared in any of its various, unreal forms. Mrs. Eddy declares, "It is well to know, dear reader, that our material, mortal history is but the record of dreams, not of man's real existence, and the dream has no place in the Science of being." Retrospection and Introspection, p. 21;

Whatever is material is mortal, has never existed in our actual experience. We should firmly deny the dream in order to enjoy to the full the good God has for us today. Emptying our consciousness of every record of error enables us to experience the present living reality of true being. Not for one single moment has God's government been unexpressed, for God's expression is continuous. There is no material, mortal history. Mrs. Eddy gives further advice: "The human history needs to be revised, and the material record expunged." ibid., p. 22; It is of the utmost urgency to blot out, erase, destroy, the material record, so that the real man's eternal continuity with God, his heavenly Parent, can be recognized.

In his statement "I and my Father are one" John 10:30; Christ Jesus gave us the truth for all time. With this simple and profound utterance he explained man's inseparability from God. That means man's inseparability from all the attributes implied by the synonyms for God—Mind, Soul, Spirit, Principle, Life, Truth, and Love. Man's unity with God is both inescapable and inextinguishable.

A student of Christian Science who had been making steady progress had difficulty in overcoming the belief of past suffering. Unhappy incidents from her early life were frequently recalled. At times she was overwhelmed by sadness, self-pity, self-condemnation.

One Thanksgiving Day she was particularly engulfed by these feelings. She prayed for guidance and comfort. The church service that day did much to alleviate her suffering. The reading from the Bible and from Science and Health, the Christian Science textbook by Mrs. Eddy, had a profound message for her. Her heart was moved by the beauty of the singing and the sincerity of the testimonies. She was uplifted and inspired.

Deity without entity—impossible. Therefore, she reasoned, not for one moment could man fail to express the divine perfection. The word "express" stood out like a beacon. Clearly she saw that neither she nor anyone else had ever expressed anything hurtful or discordant. In her true being she had known only harmony, goodness, and love. There was not one single moment when divine perfection had gone unexpressed. Her gratitude was boundless for the teaching that delivered her from all heavy sense of the past and from the belief in a human, suffering history.

The truths of Christian Science lift us to the sublime consciousness that His love is forever embracing us. God is All. In the allness of Spirit's tenderness there has never been room for unhappiness, for unkindness. We can stay on the mountaintop of spiritual consciousness, where we know that man's true history is all good, divine, and eternal, free from the dream of materiality and mortality, and where there is no discordant past.

Send a comment to the editors
NEXT IN THIS ISSUE
Article
How Do You Know? 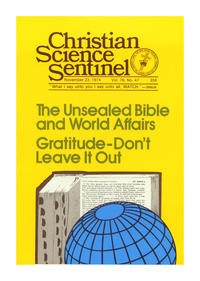