In the decades leading up to Jesus’ birth, just as during his lifetime, momentous events were unfolding. In the Roman Republic there was a major slave revolt led by Spartacus; Pompey the Great besieged Jerusalem, killing twelve thousand Jews; civil war broke out in Rome. Julius Caesar emerged the victor in the civil war and was appointed dictator, but shortly after he was assassinated. Eventually Augustus became head of the new Roman Empire.

While there was no news media then as we know it today, Jesus and his followers were likely aware of important events taking place during their time. But when we search the Gospels, what references to world events and politics do we find?

Jesus’ teachings center on our relation to God and on the fact that Christ, God’s spiritual idea, is always with us, always here to help and heal. One place in which Jesus did address news of the world, though, is this statement to his disciples: “Ye shall hear of wars and rumours of wars: see that ye be not troubled” (Matthew 24:6).

Jesus wasn’t telling his followers to be unconcerned about what was going on around them. He wanted them to see that God is bigger and more powerful than any threat they could hear of. He knew that the only way to “be not troubled” is to gain a truer idea of life as spiritual and of each of us as children of God rather than mortal men and women.

Through all he said and did, Jesus proved that sin, disease, and death could not overcome divine Life, Truth, and Love. His manifestation of Christ, including his knowledge and conviction of God’s invariable presence and the supremacy of divine good, consistently removed not just fear but all evidence of any kind of trouble.

Refuting problems as Jesus did, with the Mind of Christ, can not only bring calm and deliverance but ultimately aid in the reversal or destruction of evils.

In his instructions on how to pray, Jesus taught his disciples how to realize God’s presence and power. First, he told them, “Enter into thy closet, and when thou hast shut thy door, pray to thy Father which is in secret” (Matthew 6:6). And then he took them through an exposition of divine reality that Mary Baker Eddy referred to as “that prayer which covers all human needs” (Science and Health with Key to the Scriptures, p. 16). The entire Lord’s Prayer is about rising above a merely material sense of life and relations and trusting in God’s always-present law of Love.

The carnal mind—which Eddy termed mortal mind, the source of matter-based thinking—reports life as no more than the serial ups and downs of material conditions, which ultimately end in death. With its “If it bleeds, it leads” presentation, such thinking would leave us with a vision of existence utterly without God. But in her spiritual interpretation of the final line of the Lord’s Prayer, “For Thine is the kingdom, and the power, and the glory, forever,” Eddy presents the Christianly scientific view of life: “For God is infinite, all-power, all Life, Truth, Love, over all, and All” (Science and Health, p. 17). This is the good news of the Gospels: that God’s kingdom, power, and glory are always true, always with us, always here to comfort us and transform our experience.

On the basis of their grasp of this good news, the apostles, through the ever-present Christ, Truth, navigated times of divisiveness, violence, and political upheavals (see the book of Acts in the Bible), leaving behind not complaints or expressions of dismay but an inspiring chronicle of healings, conversions, life-changing spiritual visions, rescues from prison and shipwreck, and journeys full of “signs and wonders.” So, we too can bring to light God’s ever-present good and find our own and others’ expression of that divine goodness even amidst bad news.

Seeing that we do not become lost in the troubles of the world involves recognizing that even if we are provoked by things we see and hear, we can turn to God. This is not ignoring problems or pretending they don’t exist, but refuting them as Jesus did, with the Mind of Christ, sure of the all-power of divine Love. In this way, we not only bring calm and deliverance but ultimately aid in the reversal or destruction of evils.

Eddy wrote in Science and Health: “This material world is even now becoming the arena for conflicting forces. On one side there will be discord and dismay; on the other side there will be Science and peace. The breaking up of material beliefs may seem to be famine and pestilence, want and woe, sin, sickness, and death, which assume new phases until their nothingness appears” (p. 96).

When confronted with disturbing reports, we need not wonder, “Why are things so bad?” We can remember that any report that leaves out God, good, is incomplete and so ultimately untrue. No matter what appears to be going on, we can find the imprints of God’s good news, and trust that it will be manifested more fully as we steadfastly plant our hope, faith, and understanding in God’s goodness. 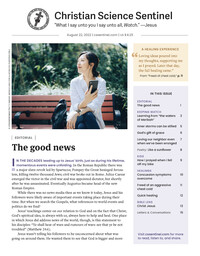