I am writing this testimony not only to express my unending gratitude for Christian Science, but also in the hopes that it may help someone rise above addiction of any sort.

I came into Christian Science as an adult and immediately had many healings, but an addiction to cigarette smoking persisted. Despite my great desire and constant prayerful work to break this addiction, it would not yield.

In seeking advice and help for this problem from well-meaning friends, they insisted that I should “just quit.” However, I was not interested in accomplishing quitting through human willpower as I felt very deeply that it would be wrong, and contrary to my spiritual growth, to exercise mere human will in this regard. To me, such an action would be no different from using drugs or hypnotism. I had gleaned enough from my study of Christian Science to understand that using human will keeps us bound to a false sense of identity. What I wanted, with all my heart, was a rising in consciousness that would show me the truth of being and bring permanent freedom.

As I continued in spiritual study and prayer, and without the exercise of willpower, the cigarette addiction diminished to a few cigarettes per day, down from several times that amount. At this point, in discussing the problem with a friend, a passage from Science and Health by Mary Baker Eddy was pointed out to me: “It breaks the dream of disease to understand that sickness is formed by the human mind, not by matter nor by the divine Mind” (p. 396).

I had read this passage many times before, but my consciousness was now prepared for a deeper understanding of its meaning. As I deeply pondered and grappled with this passage for a number of weeks, the belief in the reality of the problem began to weaken and thought was prepared for further spiritual unfoldment.

At this point, a statement made to me five years earlier by a consecrated practitioner of Christian Science came back to me with great illuminating force: Man has never smoked. The practitioner was speaking of what was eternally true of man as God’s reflection, despite the false testimony of the material senses that man was a struggling mortal with a cigarette addiction. At the time the statement was made, I had just begun the study of Christian Science and it did not mean that much to me because my thought still was so heavily mesmerized with material circumstances.

Now, however, my thought was more spiritually prepared for this message. I suddenly understood in a deep and profound way that the spiritual idea of man—my only identity—is the exact reflection of God, here, now, always. I saw the falsity in thinking I was ever something separate from God, or did not reflect God exactly. A mortal identity acting independently of God could only be a shadow. It was clear to me that the picture and belief that I had ever smoked, had ever been struggling with an addiction, was nothing but illusion.

I stayed with that very simple revelation day and night—even while smoking a cigarette—and within two weeks from that time, the addiction vanished. In the 21 years since, I have never had even the slightest desire for a cigarette.

The breaking of this addiction was the “sign following” of the most tremendous aspect of this healing: a much higher conviction and understanding of my identity as a reflection of God.

Words can never express my gratitude to Mary Baker Eddy and her revelation of Christian Science. 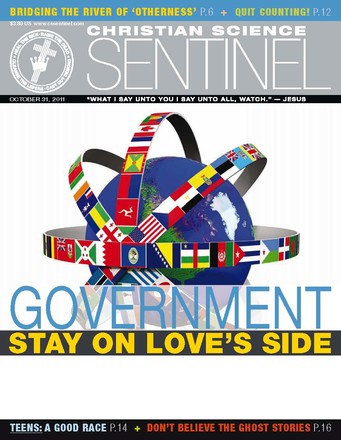 Pick the good side

Bridging the river of ‘otherness’

Our path to true democracy

World leaders are ‘rays of light,’ too!

‘I will make you fruitful’

No room for comparisons

‘Thy will be done’ government

An in-depth examination of early Genesis