Charlottesville, Virginia, August 2017. Televised images of Americans proudly bearing Nazi flags shocked viewers around the world, including me. As a child of Holocaust survivors it hit home hard to see the swastika paraded so brazenly in a country I love so dearly.

How to respond? It might seem counterintuitive to think about loving those flaunting a hate-centered sense of supremacy. Yet there are thought-provoking examples of people doing just that.

For instance, Daryl Davis, an African American musician who has worked with the likes of Chuck Berry and B. B. King, has made a habit of befriending Ku Klux Klan members.

It started in 1983, when an appreciative audience member confided he was a Klansman. That gave Davis an opportunity to ask a question he’d pondered for some time, “How can you hate me if you don’t even know me?” He has sought answers from many Klan members since and, 35 years on, claims 200 have retired their robes as a result of these interactions (NPR, August 20, 2017).

Such courageous outreach takes a willingness to accept that behind a mask of hatred there’s a fellow human being that potentially could be befriended. And this hints at a way we can all make a difference in facing the challenge of violent supremacism—whether racial, religious, or tribal. We can courageously pray to see beyond the hateful visage of those seeking to terrorize and discern a deeper unity that divine Spirit creates and knows, in which all love one another as equally precious sons and daughters of God.

Accepting this idea of universal spiritual unity may feel like a stretch given images of rage and fear, and reports of violent confrontation and terror attacks. And prayer rather than protest might appear to be ignoring an evil that needs to be firmly resisted.

It’s certainly not wrong to protest peacefully, if we’re led to do so. But prayerfully holding the true view of creation—the reality of perfect God creating perfect, and perfectly unified, man—is far from being passive. It is resisting, and eradicating, evil at its very root, because the underlying basis for all the evil we’re tempted to fear, or enact, is the opposite belief in an imperfect and polarizing material existence.

A Bible passage captures the impact that the clear consciousness of Spirit can have on what are, by contrast, illusive claims of matter. It says of God, “He uttered his voice, the earth melted” (Psalms 46:6). Commenting on this reference in Science and Health with Key to the Scriptures, author Mary Baker Eddy explains: “This Scripture indicates that all matter will disappear before the supremacy of Spirit” (p. 97).

What we call matter certainly seems solid to our material sense of things, but it’s not as substantial as it appears. It’s more accurately understood as a mental phenomenon, a belief of mortal mind—which is itself the counterfeit belief in a mind apart from the divine Mind, God. In truth, Mind, God, is infinite, the only real intelligence, leaving no leeway for such material beliefs to either enter, or even tempt, our true consciousness. In particular, the self-deceiving conceit of superiority based on a material sense of skin color, ethnicity, or other categorizations, like all matter-based beliefs, must give way to the universal sense of spiritual man that immortal Mind knows.

Seen in this light, supremacism is just one aspect of the lie that says God is not supreme and that man is merely material. But such untruths cannot stand. Spirit’s supremacy, and each individual’s spiritual identity, urge themselves upon us until our hearts yield to man’s true nature as God’s reflection, expressed in qualities such as “love, joy, peace, longsuffering, gentleness, goodness, faith, meekness, temperance” (Galatians 5:22, 23).

Cherishing this reality of universal spiritual unity impels us to express it in an ever-widening love.

This inner urging is the Christ, the transforming power of God’s love so powerfully exemplified in the healing and reforming mission of Christ Jesus. The redeeming capacity of the Christ is evident in the story of the man who praised these “fruits of the Spirit” (Galatians 5:22) in a letter to fellow Christians—a man who knew a thing or two about being driven to violence by a sense of supremacy. The Apostle Paul had once been Saul, a “fuming, raging, hateful man who wanted to kill every last one of the Lord’s disciples” (Acts 9:1, The Voice) because he vehemently believed in the supremacy of his orthodox religious views over the radical teachings of the upstart Christ Jesus.

Saul was transformed by hearing and yielding to the redeeming message Christ is always communicating to human consciousness, of man’s true identity as God’s loved child, forever free from fear and hatred. The outcome was that the “raging, hateful” Saul became the spiritually minded Apostle Paul, who championed everyone’s capacity to put on the “new man”—to understand there is no “Greek nor Jew, circumcision nor uncircumcision, Barbarian, Scythian, bond nor free,” but that God’s goodness “is all, and in all” (Colossians 3:11).

Cherishing this reality of universal spiritual unity impels us to express it in an ever-widening love, as Mary Baker Eddy did. She once wrote: “If my system of ethics and religion is not found blessing equally all classes of people then I wait and work to demonstrate more fully what Love is and what Love does for mankind” (L14362, Mary Baker Eddy to James White, February 23, 1898, © Mary Baker Eddy Collection, emphasis added).

Everybody is equally entitled to the glorious benefits of “what Love is and what Love does.” But to experience these benefits requires sacrificing any false sense of materially defined supremacy and honoring Deity’s sole supremacy by increasingly understanding and expressing God’s all-embracing love. So while we diligently pray for the protection of all threatened by supremacist intimidation, we can also pray for the liberation from hatred of those who have lost sight of their true selfhood as God’s loved and all-loving children. 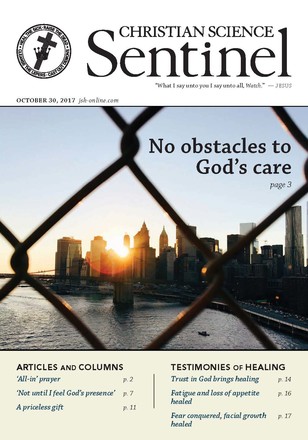 No obstacles to God’s care

What a perfect, practical oneness!

A Christian Science lecture set me on a new path

Fatigue and loss of appetite healed

The supremacy that unites us