Erasing violence from the headlines

Recently,  the news was dominated by a random, violent act involving a perpetrator with chronicled emotional disorders.

The scene took place in January, when six people were killed and another 13 injured in a shooting near Tucson, Arizona. This violent act is alleged to have been an assassination attempt on Gabrielle Giffords, a member of the United States House of Representatives, as she was meeting publicly with constituents. Giffords is recovering from her injuries.

Our communities need to be protected. Individuals with emotional or psychological problems—including the alleged shooter—need to be helped. However, I’m learning that our collective spiritual growth and maturity can help to do both. They can even stop the violence that would grab headlines.

Of course, the use of physical force is not new. Throughout history, the world has witnessed violence, much of it the result of mental disorders or feelings of isolation on the part of perpetrators. Mary Baker Eddy, the founder of this magazine, recognized this and helped many gain healing. In 1881, she visited the prison cell of the man who’d assassinated President Garfield. The assassin had no sense of his crime. He thought he was a victim and that his act of killing the President was simple justice. However, her few words had an immediate impact on the man. Apparently sensing for the first time that he had done something wrong, the man “sank back in his chair, limp and pale; his flippancy had fled” (see Mrs. Eddy’s account of her visit in Miscellaneous Writings 1883–1896, p. 112). The jailer thanked her, and said, “Other visitors have brought to him bouquets, but you have brought what will do him good.” Mrs. Eddy’s spiritual perception enabled her to expose the insidious attitude that would condone violence, and to exchange it for the real estimate of man’s true nature as a loved, complete spiritual idea—whose thoughts could never be hijacked by psychological problems, and who could never be branded a victim.

Mrs. Eddy utilized a method of prayer that acknowledged divine truths about God’s spiritual creation rather than mere supplication. Her prayers brought her thought so close to God that she was able to heal moral, mental, and physical disorders. She felt that prayer should lead to a better understanding of God’s allness and His ability to eliminate evil—including violent acts. Prayer can bring clarity to the confused, erase fears, exchange insanity for rational states of thought, and heal disorders of every kind.

Hate, along with every other disorder, has no mind to entertain it or life to live it.

Christian Science, the system of healing and living that Mrs. Eddy discovered, teaches that since God is our Life and Mind, hate, along with every other disorder, has no mind to entertain it or life to live it. As we spiritually understand this, we can begin to live our lives without these errors. The more effectively we rob evil of its claim to reality, the more it will vanish from our headlines.

God is real. He is infinite, the ever-present, the all-presence. He is always here, always with us. We must be aware, however, that as we spiritually declare God as the only Life, evil seems to lash out in unthinkable ways. It would appear as if evil were a real entity with intelligence, plans, and the capabilities of carrying them out. Yet, from beginning to end, evil is unreal, merely the supposed absence of God. Therefore, we can hold our ground and persist in affirming God’s allness and His ability to eliminate evil. By this elimination we prove that evil was never real, and never a person or a real fact.

God’s creation is not flawed, nor did He create His children as insane, misguided, unloved, or confused. To prayerfully help the world and our communities, we must gain the spiritual conviction that enables us to break the belief that God’s kingdom includes elements of suffering and harm. We must affirm that families and friends who experience suffering because of violent acts can feel the peace and grace of God.

Jesus proved in his Christly ministry that evil at its worst is illusory and defeatable. He completely proved God’s allness and evil’s nothingness. What appear as evil’s temptations are not others’ thoughts or our own. Because they are not of God, they can be mentally resisted and put down. Maliciousness and confusion fade when God’s tenderness and intelligence are confidently confirmed as all that dominate our lives.

As we understand that everyone exists to express God and His goodness, we can prayerfully demand to witness a greater degree of morality and civility. And just as with Mrs. Eddy’s experience in the prison cell, the more we acknowledge God’s supremacy, the more we can expect to see others and ourselves act in dignified, sound, honest, productive, and loving ways.

This is the most important news of the day.

Keith Wommack is a Christian Science practitioner and teacher. He lives in Corpus Christi, Texas. 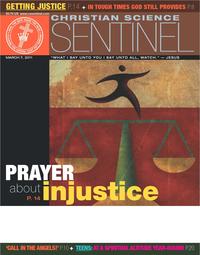