Learning the truths of Christian Science since childhood nurtured in me an understanding of my relationship to God that would prove to be a saving grace in times of great need. I was guided by loving parents and dedicated Sunday School teachers, and I experienced and witnessed many physical healings brought about by prayer alone.

During my high-school years, however, I was so taken with the drums that a musical career became my overriding purpose in life. Less and less thought was given to developing my understanding of man's spiritual nature and purpose. Soon I was in demand for professional jobs that lent status among my peers. I felt I no longer needed Sunday School.

At the same time I was very impressionable and did not resist the temptation and availability of drugs. This was in the mid-fifties when drugs were not yet commonplace in high schools, but in my circle they were the norm. Fellow musicians believed that drugs enhanced creative ability. I became a slave to many evils: immoral relationships and unlawful activities.

I did manage to finish high school and attend a fine music school on the East Coast for one semester. During my stay at college I attended Sunday School sporadically and returned to the moral standards of Christian Science. Then at nineteen I returned home to marry my childhood sweetheart and become the father of a son.

The pressures of having a family to support resulted in my taking road jobs in music, and I was away from my wife and son most of the time. The drug problem returned, and the marriage ended in divorce after only three years. I permitted this to be an excuse for further indulgence, and after a short time I became addicted to heroin. Finally I ended up behind bars as much as on the street (all drug-related arrests).

During one of these incarcerations I went to the Christian Science service and felt as the prodigal son must have felt when he was instantly forgiven by his father after squandering his inheritance and self-respect on riotous living (see Luke 15:11-24). Gratitude for the precious gift of life in God, divine Principle, welled up in me.

After the service I was permitted to visit with the Christian Scientists who had volunteered their time to read the weekly Bible Lesson (outlined in the Christian Science Quarterly) at the prison. The worker who served as Second Reader was a Christian Science practitioner, and he offered to pray for my recovery. I'd had no contact with family or friends for over two years, but now I had found a true friend. The practitioner's clear sense of Truth enabled him to see right through the human picture of confinement, degradation, and self-condemnation. This laid the groundwork for eventual complete healing—healing through obedient reliance on the true facts of God's man, free from the erroneous concept of matter-based existence.

I decided to get in touch with my family. Soon after my first contact, my father and youngest brother flew out to visit me and secured an attorney to expedite my case through the courts. My mother wrote daily, and the practitioner prayed tirelessly with me through the entire trial period. I was released to the practitioner's custody during the waiting period before sentencing. For the lovingkindness and untiring support this man and his wife gave me I will always be thankful.

Within two months I was freed by the court to probation in my home state. The law-enforcement people assigned to my case acknowledged my regeneration. When it was time to return home, the practitioner insisted on flying back with me to ensure my return and to meet my whole family. This man was truly a twentieth-century good Samaritan!

Much prayerful work still needed to be done on my part to complete the healing. There were temporary setbacks, but I eventually gained complete freedom through applying the healing truths of Christian Science. Science and Health with Key to the Scriptures by Mary Baker Eddy states (p. 407), "Let the slave of wrong desire learn the lessons of Christian Science, and he will get the better of that desire, and ascend a degree in the scale of health, happiness, and existence."

Since this healing my spiritual progress has been steady and sure. After joining a branch church I became involved in church activities from ushering to teaching Sunday School to serving as First Reader. For all the ways the teachings of Christian Science have blessed and continue to bless my life and humanity as a whole, I'm most grateful. What a privilege to be a student of Christian Science! 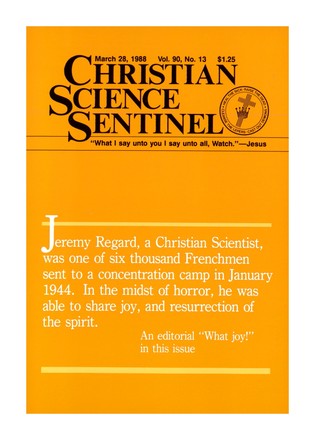 The inevitability of life

Maintaining our devotion to God

It's time to hear about your healings

The doing of it

Christianity: again a religion of acts

At supper with Lazarus

Learning the truths of Christian Science since childhood nurtured...

Almost twenty years have passed since my testimony was published...

With deepest gratitude to ever-present divine Love, which governs...

Through my introduction to and early study of Christian Science...

When I was eight years old my mother learned of Christian Science...