I came into Christian Science as a result of my parents’ search for God. It was in Nigeria, where they were, humanly speaking, poor and uneducated and were struggling to raise a family of six children. My parents were often sick and always somewhat disillusioned about life’s prospects.

Because my mom wanted to be able to read the Bible, she enrolled in primary school classes that took place at night, after a full day’s work. Her deep love for learning spurred her on. She graduated from high school and went in search of a church that would teach her the right way to worship God. She had no clue as to where to find what she was looking for, nor was she absolutely sure that what she was looking for really existed, but she kept on.

Our family would often attend different churches. As time went by, things started to improve for us, and my dad joined us in the search. One of the churches we visited was run by a minister who shared metaphysical truths from his pulpit. This was different from anything we’d ever heard before. It was such a wonderful time in our lives, and we enjoyed it very much.

One day this pastor invited us to see his library, where we found many scholarly publications, including works by Mary Baker Eddy. We read a little of everything, but I became mostly interested in the Christian Science books and magazines. So I asked the pastor what Christian Science was. He explained that it actually was a church—the Church of Christ, Scientist, I later found out—based in the United States. He mentioned that there was a branch church in our town, and he told me where it was located.

I learned that Christian Science church services ran for just an hour, while the Sunday services we had been attending lasted for about five hours. So I began sneaking out in the middle of our service to attend the Christian Science service and then rejoining my family in our church!

A year after I had completed my primary school classes, my dad passed on, leaving me and my mom to fend for the rest of the family. I joined Mom in her business, but further schooling was impossible for me. With my level of education, I found it challenging to understand many of the big words contained in the Christian Science textbook, Science and Health with Key to the Scriptures by Mary Baker Eddy, but I kept studying and regularly read the Bible Lessons in the Christian Science Quarterly.

For a while, the study of Christian Science became my only form of schooling. But I realized that God was giving me the opportunity of a lifetime, and every step of the way the spiritual truths I read and applied in my daily life brought me incredible freedom and a sense of happiness beyond anything I had ever known before.

I took the Apostle Paul’s injunction to “pray without ceasing” literally (I Thessalonians 5:17). Because I wanted so desperately to understand Christian Science, I studied it like a child who has just received the gift of a most desired treasure, and I soon realized that the human predicaments I was in were not true about me as God’s child, made in His likeness (see Genesis 1:26).

Soon I left the church our family had been attending and joined the local Christian Science Society, and then The Mother Church in Boston. I was privileged to serve our Society in many capacities and to help in rebuilding our Reading Room. As a family, we had many healings through spiritual means alone.

Through our daily study of Christian Science, and much prayer, my family gradually overcame poverty, and we experienced the richness of God’s abundance. My mom joined me in our branch church and later took Primary class instruction in Christian Science. She became very successful in her business.

Studying privately, I was able to pass all the exams I needed to and was admitted to a federal university. I am still growing in my understanding of the nature of God and my relation to Him, but, most important, I know that all I have achieved so far has been accomplished through the power of God and the revelations of Christian Science, for which I will always be grateful.

Steve Okwor is a Christian Science nurse who lives in Boston, Massachusetts. 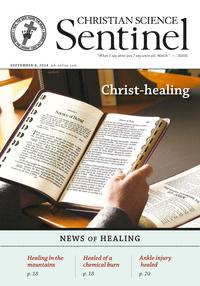