Children never fail to surprise me—whether it is their extensive knowledge of dinosaurs, their never-ending energy, or their unconditional love and forgiveness. I have been a baby-sitter for several years. I’ve looked out for children while they played outside, and I’ve helped fix meals and made sure they got ready for bed. And there have been times when they have handled things better than I ever could.

One boy I babysit, Peter, was born without a forearm. This may seem to some as a real loss, but it has never stopped him from rock climbing, swimming, and playing just as normally as any other kid. After a while, you realize he is whole, inside and out. A hymn from the Christian Science Hymnal says this about God, and man as His reflection: “In Thine own image we may see / Man pure and upright, whole and free” (Violet Hay, No. 12, © CSBD). So I try to remember this and see the spiritual qualities that children, and everyone, express.

One day this summer I was at the pool with Peter and his two younger brothers. We were playing in the sand, when another little boy approached Peter and said, “I hate you because of your funny arm.”

That floored me. What a horrible thing to say! My sisterly instincts made me want to yell and protect Peter from the bullies I’ve heard him talk about, but I’m so glad Peter spoke first. He looked straight back at the kid, hurt hidden in his eyes, and said: “It’s not nice to hate. I try to love.” Then he walked away.

I’m learning how important it is to follow Jesus’ example.

I had to walk away, too, to hide the tears welling in my eyes. At first I was crying because I was sad that the little boy would say something so hurtful to Peter, but then I was crying because Peter had handled the situation in such a forgiving manner, and I couldn’t help but marvel in the strength of his love. It reminds me of how much Christ Jesus loved, despite so much hate that came his way. His thoughts were so filled with love that he healed people who didn’t even fully appreciate or understand what he was doing (see Luke 17:11–19). And I’m learning how important it is to follow Jesus’ example.

After I had collected myself, I noticed that the other kids weren’t letting the boy who’d insulted Peter play with them, because Peter had not been the only one he’d been mean to. But then Peter’s youngest brother walked up to the boy, the same boy who had just insulted his big brother. He asked if the boy wanted to play with him! The boy smiled and nodded, and they both joined the other kids for a peaceful afternoon at the pool. All was forgiven.

One of my favorite quotes is included in an article in Mary Baker Eddy’s Miscellaneous Writings 1883–1896. It says,

“… we should go forth into life with the smallest expectations, but with the largest patience; with a keen relish for and appreciation of everything beautiful, great, and good, but with a temper so genial that the friction of the world shall not wear upon our sensibilities; …”
(p. 224).

This quote came to me that day at the pool. The ideas from this quote and Peter’s example have been a big help to me in dealing with others.

For example, I am a leader of a group at school, and at the beginning of the semester there was some turmoil in the group. Two of my friends were having issues with each other, and the animosity was tough on the group dynamic. The argument stemmed from jokes taken the wrong way and blind dislike for one another.

I prayed, thinking of how easily and quickly the issue at the pool was solved when love was applied and practiced. I knew that my two friends were made by God to be just as loving as the little boys. It was not their true nature to take offense when no wrong was meant. I also prayed for patience and the ability to not get pulled into the situation. I had to watch my thought and be the first to forgive the person I believed to be the cause and perpetrator of the drama.

In just a couple of days, the whole situation got better. I wasn’t worried about arguing in the meetings anymore, and we were getting things done. It seemed that my friends had forgiven each other, and I was so grateful. They aren’t best friends, but they are working together, and we haven’t had any more issues.

I’ve learned that if you are met with another’s hatred for you, you pray to love, and appreciate that many others actually want to love, too. There is nothing stopping us from changing the world into a more childlike, forgiving place. Eventually, we won’t have to try so much anymore, and we’ll just love.

Lauren Weiss is in the 12th grade at a school of the arts, focusing on drama and vocal music.

Send a comment to the editors
NEXT IN THIS ISSUE
Bible Lens
Bible Lens—April 20–26, 2015 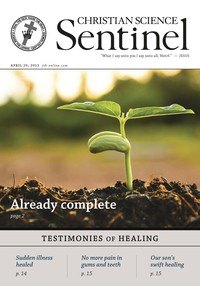