A dad-to-be takes his cue from Joseph

When expecting a child, both men and women play an important role in preparing for childbirth. While comedians joke about the father’s role (or the lack thereof) during pregnancy and childbirth, I found I had a unique, humble, and active part in supporting the births of our children.

One of the passages I found extremely helpful during my wife’s pregnancy with our first child, which many expectant parents studying Christian Science or reading Science and Health may be familiar with, was: “To attend properly the birth of the new child, or divine idea, you should so detach mortal thought from its material conceptions, that the birth will be natural and safe” (p. 463).

To me, this speaks about a child’s completeness and the affirmation that the child comes with all he or she needs to do well because her or his origin is not material but spiritual. The child is a whole and complete spiritual idea of God. As I prayed with these truths, I often felt those nine months were actually as much for my development as an expectant parent as they were for our soon-to-arrive child.

There were many examples that illustrated how this prayerful preparation resulted in a wonderful demonstration of God’s continuing care, including the following that occurred during my wife’s pregnancy.

My wife and I had discussed how we hoped to have a home birth with the assistance of a midwife. About six months into the pregnancy, we needed to find a new place to live. While we looked for several apartments, it was hard to find something we could afford that we also really loved. In thinking of Joseph and how he looked for an inn for the baby Jesus to be born in, I knew any of these apartments would be more comfortable than the perhaps harsh conditions Mary may have encountered in a stable. Yet, I hoped it would be the kind of place we felt inspired by in welcoming our child into this world and calling it our first family home.

Over two centuries later, Joseph still strikes me as one of the strongest role models for fatherhood.

During the times of expecting both our children, I have been blessed by the idea of cherishing the qualities Joseph expressed. He didn’t get angry when Mary was surprisingly with child. He probably didn’t get frustrated or stressed when they couldn’t find an inn. I saw how significant Joseph’s supportive role was to the welcoming of their baby. Years later, when Jesus stayed days after in Jerusalem to speak to the learned men in the temple, Joseph didn’t shout or threaten to punish him. Over two millennia later, Joseph still strikes me as one of the strongest role models for fatherhood.

On the final day before we were to sign a new lease for a place we’d chosen, I noticed a posting for an apartment while at work. I went to take a look at it during a break, and knew I’d found a place both my wife and I would love. As Joseph and Mary found what has been depicted as a humble yet gracious place to welcome Jesus, so my wife and I ended up moving to the apartment I’d found instead of signing the lease on the original property we had chosen. It proved to be the perfect place to welcome our new son.

We had also found a midwife we enjoyed working with, and as the due date for our son’s arrival passed, we had more frequent visits with her. Then, we received a call telling us the midwife had had a family emergency. She would not be continuing with any of her cases, and she didn’t have a referral we could contact.

Realizing our child could arrive at any moment, I prayed to be confident in God’s care and provision, though I had no idea how it would work out. A few hours later, I went to wait tables at a restaurant where I worked in the evenings. As I waited on a couple with a six-week-old baby, we started talking about the delight in being new parents, and it came out that the family had had a home birth with a midwife we had not heard of. She worked in an adjoining town six months of the year, and the couple shared her phone number with me. By the next morning my wife and I spoke with her and she agreed to work with us. In true Joseph/Mary fashion, our son arrived on Christmas Eve in our new home.

Whether we choose to welcome the newest member of our family at home or in a hospital, we can have the confidence that we are witnessing to a most natural event in God’s unfolding in our lives the demonstration of family. It has been a great joy for me to participate in this truth.

Trevor Snorek-Yates lives with his wife, son, and daughter, and their dog and cat, just outside of Boston, Massachusetts.&nbsp; 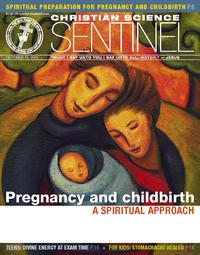