THE WORLD SEEMS FILLED with problems—racial, religious, political, domestic, ancient and new. It can feel as though there are enemies in every corner of life. And in order to have a more spiritual view of the world, and any hope of true healing, it helps to redefine what it means to defeat an enemy.

My study of Christian Science has taught me that Jesus' example is the only way to defeat an enemy because in the act of loving him or her, we change the definition of enemy. We can love only those we truly see as lovable.

Think, for example, of Christ Jesus on the night before his crucifixion when he wouldn't let his disciples take up arms against the soldiers who came to take him away. Later, he asked God's forgiveness of his accusers, saying, "They know not what they do" (Luke 23:34). He didn't treat any of those men as his enemies. Instead, he taught that we must love our enemies unequivocally, forgive and bless them even when their behavior seems unjust or unfair.

In an article titled "Love Your Enemies," Mary Baker Eddy, the founder of Christian Science, asked: "Who is thine enemy that thou shouldst love him? Is it a creature or a thing outside thine own creation?" She continued: "Can you see an enemy, except you first formulate this enemy and then look upon the object of your own conception? What is it that harms you? Can height, or depth, or any other creature separate you from the Love that is omnipresent good,—that blesses infinitely and all?" (Miscellaneous Writings 1883-1896, p. 8). Living up to this may be a tall order, but how important it is not to see an enemy but to see God's loved and loving child. That is everything!

Recently, on a plane to San Francisco from Los Angeles, I sat next to a couple returning from a vacation in South America. They shared family stories, and spoke of meeting wonderful people all over the world. Every once in a while, they would enrich each other's accounts. I was enchanted. I loved their energy, joy, and obvious tenderness and care for each other. Some of their stories hinted that they believed in people's innate goodness—something I'd learned from my study of Christian Science.

The Christian Science connection came out in our conversation, and they became very interested in what I was sharing. The husband was getting his doctorate and researching how race and cultural environment may influence crime in certain circumstances. His focus, if I understood it correctly, was on what to do after a crime had been committed. He really hoped to figure out how to save otherwise good people from the torment resulting from causing harm to others, and to find ways to restore to victim and criminal the sense that goodness and peace are possible for everyone. He asked me to explain more.

CHARITY IS LOVE; AND LOVE OPENS THE EYES OF THE BLIND, REBUKES ERROR, AND CASTS IT OUT. CHARITY NEVER FLEES BEFORE ERROR, LEST IT SHOULD SUFFER FROM AN ENCOUNTER. LOVE YOUR ENEMIES, OR YOU WILL NOT LOSE THEM; AND IF YOU LOVE THEM, YOU WILL HELP TO REFORM THEM.

So, I started with the idea taught in Christian Science that a divine Principle governs the universe, and that Principle is Love—synonymous with God. I told him about my growing up with parents devoted to prison ministry through Christian Science, and how they would teach those behind bars that they were priceless to God—originally innocent, and nurtured by Love. My parents would show the prisoners how spiritual knowledge could help them redefine themselves as truly valuable, free from anger, fear, and vengeance, and as able to leave behind the identification of themselves as criminals and therefore as someone's enemy.

How great it would be if we all worked to see the good in those around us.

My new friends on the plane naturally related to these ideas. Apparently in their own experience they had seen how restorative thinking had helped break a cycle of recidivism in someone they knew. But they wanted to hear more. So I explained how I went about praying for peace in families, neighborhoods, and around the world. I suggested that from all the news stories of crime, war, hatred, even political disagreement, it often seems as though the world is filled with victimizers and victims. Even when the perpetrators are caught and prosecuted, the victims have to carry the hurt with them. They are forever victims.

I shared what I'd learned from a frightening and threatening experience I'd had as a teenager, and two other experiences I'd had in college. They had made me afraid, self-conscious, and generally worried about my safety. I became convinced that I was not safe, and that I could be a victim at any moment. My fear grew, and one day I mistook a friend entering my apartment for an intruder. In my fear-filled state, I nearly threw a knife at him. Afterward, I realized how I'd let past experiences take over my thinking, and I knew I needed to pray for healing. I wanted to reverse the fear and the expectation that there were enemies around every corner. I wanted to understand God as always being with me. I prayed to feel the protective presence of divine Love with me no matter where I was. And that really helped. Soon I stopped being so jumpy and upset inside, and began to be much calmer on the street and in crowds. However, although I felt cocooned inside a type of God-given safety, I was still believing there was danger outside. I realized this was not a complete healing. There was more work to be done.

As I prayed to understand more of the divine nature of Love, I began to realize that I had to stop thinking there were bad people in the world from whom good people needed protection. I had to see everyone—regardless of their actions—as part of Love's creation. That meant that both the victim and the victimizer needed my prayer. In order not to have victims, there can't be victimizers.

The couple so appreciated what I shared with them that they decided to buy a copy of Science and Health with Key to the Scriptures by Mary Baker Eddy when they got home so that they could learn more about her views on Jesus' life and works. They thanked me for talking with them and were still chatting animatedly about our conversation as they deplaned. They inspired me, too. Their enthusiasm and receptivity encouraged me to commit myself even more deeply to following Jesus' example, to seeing God's beloved child everywhere, no matter what.

Over the years, I've heard several accounts of people who, when threatened by someone, prayed in defense of their attacker, in addition to praying for their own protection. Such prayer resulted not just in a peaceful outcome but led to reformation for the wrongdoer.

What if we all started to pray in that way? What if we refused to see co-workers as unreasonable, family members as unkind, political figures as blatantly wrong, people on the street as able to do us harm? Instead, how great it would be if we all worked to see the good in those around us, to see God's beautiful light shining through everyone. Little by little, our personal environment would improve; our ability to see the good in the world would blossom.

Jesus said that there were two main commandments: Love God, and love one another (see Mark 12:30, 31). Following those simple rules is truly the only way to eradicate an enemy. People everywhere deserve to know themselves as God's children, to know that they are safe from aggressive, harmful thoughts and actions. It doesn't matter if they are the ones tempted to do such things, or the ones being harmed by them. Unless we start loving everyone in the way Jesus taught, we will continue to see potential danger in others, and our experience will be affected. But when we're inspired by Jesus' timeless message, just think how much more love we could help make available to others—and how much healing would result!

To hear Dawn-Marie Cornett speak on this topic, tune in to Sentinel Radio during the week of June 19-25, 2010. For a listing of broadcast locations and times, go to www.sentinelradio.com. To purchase a download of this radio program, #1025, on or after June 19, go to www. sentinelradio.com and click on Audio Download Store.

Dawn-Marie Cornett is a Christian Science practitioner. She lives with her husband, Howard, and their three children in Framingham, Massachusetts. 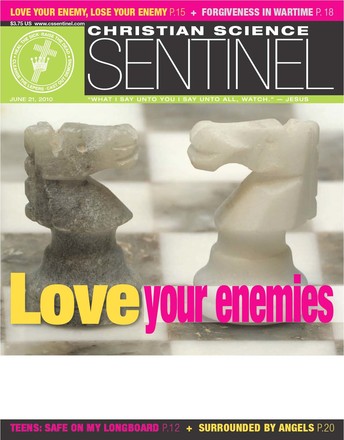 REVERSING THE ME VERSUS THEM PARADIGM

SAFE ON MY LONGBOARD

with contributions from Henna, Avantika | June 2010

NOTHING I'D RATHER BE DOING

HEALED OF BOILS AND INFECTION