We are called upon to record, with tenderest love and sympathy, the sudden passing from our sight of our beloved brother, E. Noyes Whitcomb of Boston. Our Leader has spoken of him as "one of the noblest, most lovely, and best of men," and those who have been brought into daily association with our friend have reason to know that this expression of esteem was well bestowed; that it was earned by that unfailing ability, justness, gentleness, and practical Christian character which stamped him as a man of highest integrity.

Mr. Whitcomb's long, successful, and honorable business career established him as one of Boston's most respected and best-known business men, and this estimate of him is held not only by those with whom he was brought into personal contact, but by the very great number who knew him by reason of his connection with public and charitable enterprises.

He first became known to Christian Scientists in 1894, through his work as one of the contractors for The Mother Church edifice, then in course of erection, but he has become most widely known to them as builder of the church in Concord, Mrs. Eddy's gift to the Christian Scientists of her home city, and as builder of the new edifice now in course of construction for The Mother Church in Boston.

Mr. Whitcomb became a member of The First Church of Christ, Scientist, in Boston, January 4, 1896; was elected an Executive Member, December 28, 1901, and has filled every position assigned to him in his connection with the Christian Science movement as an exemplary Christian. The good he has done lives after him, and his memory is cherished as that of a just, generous, lovable, and loving man, who accomplished much for his fellows. 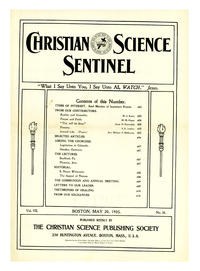