Some thoughts on terrorism

In recent statements, a number of senior United States intelligence and national security officials have voiced an unusual degree of pessimism regarding prospects for reversing the spread of global terrorism. Among other things, they point to the rise of ISIS, the so-called Islamic State carved out of Iraq and Syria; the recent collapse of a friendly government in Yemen that was striving to contain Al Qaeda; and, more generally, the environment created by the failed promise of the “Arab Spring.” The threat to global security, they say, remains long-term while the effort to contain terrorist activity is hindered by the pace of its expansion.

All of which prompts the question: Is mankind helpless in the face of these encroaching displays of anarchy and nihilism? To this question Christian Science answers a resounding “No,” based on the understanding revealed in Scripture of God’s unerring government, and of man’s true, perfect nature under God’s government.

Reasoning out from this understanding in prayer, one can gain confidence that divine wisdom and foresight are expressed in man, and are therefore at work in the efforts of officials here and abroad who work to counteract terrorism. Their endeavors to prevent terrorist acts can be powerfully supported by comprehending, as the Bible declares, that there is no place that evil designs and wicked purposes can hide—nothing “hid, that shall not be known” (Matthew 10:26)—since the light of Truth, a synonym of God in Christian Science, exposes and expunges evil in all its manifestations. As Job has it, “He disappointeth the devices of the crafty, so that their hands cannot perform their enterprise” (5:12).

But there’s another basis on which the threat of terrorism can be met and mastered, and that’s by taking a cue from the master Christian, Christ Jesus. Mary Baker Eddy, the Discoverer and Founder of Christian Science, writes that the key to Jesus’ many healings of physical and other infirmities lay in his capacity to see the perfect man of God’s creating, even where, as she puts it, “sinning mortal man appears to mortals” (Science and Health with Key to the Scriptures, p. 477). By recognizing that man as defined in the first chapter of Genesis (see verses 26, 27) is the very image and likeness of God, Jesus could penetrate the illusions of leprosy or blindness or insanity and thereby restore health. And so, too, can we see through the illusion that man is governed by hatred or malice or revenge—see through to the real truth that he is, as the child of God’s creating, innocent, pure, and holy.

The innocence of man may sometimes seem as improbable to mortal sense as the purity that Jesus saw in a leper. Yet both innocence and purity are demonstrable truths regarding man as understood in Christian Science. Despite material appearances, the spiritual fact is that God, who is entirely good, never created a man capable of evil or error. Nor can man, whose very heart is fashioned by God (see Psalms 33:15), be conditioned into hatred by ethnicity or nationalism or by false views of religion or God.

Both innocence and purity are demonstrable truths regarding man.

The Apostle John writes that God’s children are the sheep of His pasture, that He calls each one of them by name, and that they hear and are obedient to His voice (see John 10:3, 4). It is this call of the Christ, or Truth, that is the only true influence embracing humanity. There being only one Mind, one source of intelligence, man can have no thought underived from this divine source. There is no other impulsion at work in the true man’s thought and action. Man is governed only by and obedient only to divine Love, thereby reflecting the very animating nature of God. In short, God expresses His goodness and perfection in every one of His children. As Mrs. Eddy writes, “The spiritual man’s consciousness and individuality are reflections of God” (Science and Health, p. 336).

These spiritual ideas become practical and demonstrable in human experience as an individual embraces them in prayer, as he or she accepts them as true and expresses thought imbued with love, even toward terrorists themselves. The practical aspect of such prayer is that the divine influence—not the personal influence of an individual doing the praying—can be felt, with all the redeeming and transforming potential this implies, even for those motivated by evil thoughts and aims. The possibilities are hinted at by Christ Jesus, who dispossessed a Gadarene man of an evil spirit, leaving the man “clothed, and in his right mind” (Mark 5:15). Our own prayers can fulfill the aspiration embedded in the “Daily Prayer” from the Church Manual: “… and may Thy Word enrich the affections of all mankind, and govern them!” (p. 41).

God’s expression of Himself through man is perpetual, and we need to yield to His government in our human relationships through such loving qualities as Mrs. Eddy describes—“true brotherliness, charitableness, and forgiveness” (Manual, p. 40). Grasping and living the fact that all men have only one Mind—the Mind that is God—has a profound unifying effect, bringing to light the only basis upon which the brotherhood of man could ever be established among humankind on a lasting and permanent foundation.

There is a completely certain, demonstrable effect that this spiritual understanding, this clear seeing, can have on the course of human events, as Jesus proved. His pure insights into the true, Godlike nature of man brought about countless healings.

To human sense and by purely human reckoning, dangers—nourished by alienation, misguided ideology, or thwarted aspirations—seem to abound, causing fear and anxiety. But looked at through the lens of spiritual reality provided in the Bible and the teachings of Christian Science, the prospect is one of healing, and filled with hope.

The writer of Psalm 119 entreated God, “Open thou mine eyes, that I may behold wondrous things out of thy law” (verse 18). With eyes wide open to the “wondrous” truth of God’s spiritual creation, the roots of terrorism can be uncovered and destroyed. 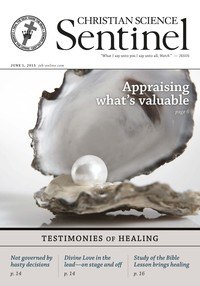