… as do any children you may have, no matter when you had them. So what about reports of Americans having babies later and later in life? Over the past 50 years, the age of first-time moms has climbed by four years. Some are quick to point to advantages of waiting to have kids, such as declining divorce rates and rising financial outlooks. Critics see disadvantages for the children, including possible health problems and less of a chance to get to know older extended family members.

We’re not pushing for parents to be older or younger. We’re in favor of a spiritual realization growing more apparent. It is the realization that you come from God. So do your children. So do all children. That realization amounts to a healing prayer. As it permeates thought, the troubles plaguing older first-time parents and their families recede. So do troubles afflicting their offspring. The health of parents and their kids grows surer. Spiritual resources dawn and then shine brighter.

Where are those spiritual resources found? For starters, how about turning to the Bible, maybe one that has been in your family for years, and the spiritual resources—the spiritual truths—that populate its pages. You can read about 100-year-old Abraham and his 90-year-old wife, Sarah. They were promised, and ultimately blessed with, a child. They could scarcely believe it. They could hardly accept the promise. The Bible reports, “Abraham bowed down to the ground, but he laughed to himself in disbelief. ‘How could I become a father at the age of 100?’ he thought. ‘And how can Sarah have a baby when she is ninety years old?’ ” (Genesis 17:17, New Living Translation).

You come from God. So do your children. So do all children.

Maybe the real message here is not that long ago some record-breaking parenting took place. Perhaps the real message is that, right here and right now, the God who is both Truth and Love dismantles limitations. He cancels out the fears and doubts that would challenge one’s well-being. He opens up the promise of divine renewal. God is the heavenly Mother-Father of us all. She parents all throughout Her purely spiritual realm. Each idea of God—and we can all see ourselves as God’s ideas—is agelessly, endlessly linked to the Divine. A book that partners beautifully with the Bible, Science and Health with Key to the Scriptures by Sentinel founder Mary Baker Eddy, tells us this in a paragraph headed “Scientific obstetrics:” “The new idea, conceived and born of Truth and Love, is clad in white garments. Its beginning will be meek, its growth sturdy, and its maturity undecaying” (p. 463).

Both the Bible and Science and Health remind us that we are all shaped by spiritual laws, all subject to health-maintaining realities. Those spiritual laws and realities underscore the fact that we are not, in truth, defined by physical limitations. Not those purported to be physical health laws. Not those supposedly related to aging. The fact remains: You—a meek and sturdy and undecaying idea of Truth and Love—come from God. 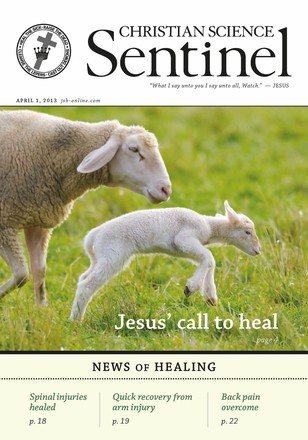 At the table with other Christians

Fasting, a complement to prayer

The first Easter and Jesus' love

You come from God...