On page 148 of "Miscellaneous Writings" there appears an extract from a letter by Mrs. Eddy which she has also used as a foreword to the Church Manual. It is clear, from a study of this paragraph, that Mrs. Eddy regarded the rules and by-laws embodied in the Manual of The Mother Church as of inspired origin; that they are necessary "to maintain the dignity and defense of our cause," and "requisite to demonstrate genuine Christian Science."

All of this being conceded to be the truth about these by-laws, also the further fact that they are permanent and unchanging in their provisions, it is of course impossible that they should be neglected by Christian Scientists, or that any of them should become "a custom more honored in the breach than the observance." As to the manner in which these by-laws may be made most useful to Christian Scientists, we may well profit by Mrs. Eddy's answer to the question so often asked by those eager to gain and understanding of Christian Science, in which she says: "Study thoroughly the letter and imbibe the spirit. Adhere to the divine Principle of Christian Science and follow the behests of God, abiding steadfastly in wisdom, Truth, and Love" (Science and Health, p. 495).

Those who have studied thoroughly the rules and by-laws of The Mother Church, and have imbibed the spirit, have seen that compliance with both the letter and the spirit of these rules is necessary to the steady and stately progress of Christian Science and the growth of the individual Christian Scientist. There is not one of them but was intended to promote Christianity and brotherly love, to safeguard the purity of the religion of Christian Science and insure the genuineness of all that officially bears its name, as well as to perpetuate the organization which Mrs. Eddy founded for the continued promulgation and practice of this Science.

We have been told by the wise man that it is "the little foxes, that spoil the vines;" and that these little foxes are always at work in the vineyard of Christian Science, is shown by the hesitancy of some to give honor where honor is due. As an example of this we may note that even in the Sunday services some readers forget to abide by Article XV of the Church Manual when announcing hymns which were written by Mrs. Eddy. They may say that it is a hymn written by our Leader, but to the stranger within the gates that term carries no special meaning. In The Mother Church the customary form of announcement is, "The words of this hymn (or solo) were written by our revered Leader, Mary Baker Eddy," and the entire hymn is read, thus giving it a further distinction from hymns by other authors, as only the first stanza of these is read.

It may also be of interest to the branch churches and societies to know that in The Mother Church it is the rule rather than the exception that one of Mrs. Eddy's hymns is sung at each service, in conformity with a letter from Mrs. Eddy to the Board of Directors of The Mother Church some twelve years ago, and published in the Sentinel of Aug. 29, 1914, in which she says:—

"It would be a good thing to have one of my hymns read and sung about every Sunday. It would spiritualize the thought of your audience, and this is more needed in the church than aught else can be."

It may seem only a slight departure to substitute some phrase or title for Mrs. Eddy's name in quoting or reading from her books, but nothing less than strict conformity to the rules and by-laws laid down in the Manual is right for a Christian Scientist. 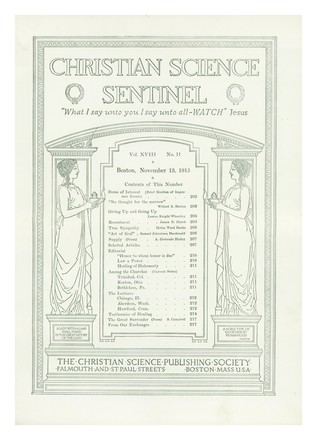 "No thought for the morrow"

Giving Up and Going Up

When a man who is practising medicine says, "I use Christian Science...

When the great apostle to the Gentiles confronted King...

A synopsis in your paper of a recent sermon indicates...

Jesus said to his disciples, "It is expedient for you that...

In an article purporting to refute Christian Science the...

The evangelist whom your paper reports as making the...

Your interesting report of a clergyman's lecture credits...

We need a clearer discernment of the vital significance of...

"Honor to whom honor is due"