How often have we cried out in pain, grief, or bewildered patience: Why do I have to go through this? Why must I overcome this disease, this sense of separation from a loved one, or this unhappy relationship within the home or place of business?

Christian Science provides a thought-provoking answer to this question in its textbook, "Science and Health with Key to the Scriptures" by Mary Baker Eddy. On page 39 we read, "We must have trials and self-denials, as well as joys and victories, until all error is destroyed." Truth destroys error by correcting it, and in this instance the truth concerning oneself denies the reality of any I that seems to be going through an inharmonious situation or condition. For the Bible teaches us that God is good and the only cause; that He is the creator of man in His own image and likeness. The Bible also reveals God as Love, Spirit, Soul, and points to the infinite One as the only intelligence, or divine Mind, of the universe including man, as the Lawgiver, or absolute Principle, of all that really exists. Christian Science shows us how to make these teachings practical in our daily lives by following the example of Christ Jesus, who brought to light man's real identity as the harmonious manifestation of God's perfect and eternal being.

So-called trials, then, present grand opportunities to let Christian Science teach us how to deny the sense of a self morbidly devoted to its own personal interests and to rightfully claim our real identity as children of God. We have authority for doing just this in the Scriptural passage in the first epistle of John (3:1), "Behold, what manner of love the Father hath bestowed upon us, that we should be called the sons of God."

To demonstrate sonship with God demands a sacrifice of mortal mind's opinions and theories of substance, life, and intelligence as existent in a material body. This yielding of material so-called knowledge to the omniscience of immortal Mind reveals man as an idea in consciousness, coexistent with this Mind. Thus are man's spiritual sonship and inheritance acknowledged and accepted.

The fourth chapter of John's Gospel tells the beautiful story of Jesus' encounter with a Samaritan woman by Jacob's well. Because he had just heard that Herod had imprisoned John, Jesus left Judea for Galilee, "and he must needs go through Samaria." This province lay directly between Judea and Galilee and was the shortest route for the traveler to and from Jerusalem, but the Jew of that day usually took the longer way around it in order not to be defiled. Besides, the ancient and bitter animosity between the Jews and the Samaritans was still remembered, and going through Samaria demanded constant alertness and vigilance. It is interesting to note that the name Samaria is derived from a Hebrew verb meaning to watch.

Behind Jesus was Jerusalem, the temple and stronghold of scholastic Jewish theology. There his many marvelous works had not gone unnoticed by the hostile Pharisees. With unfriendly eyes they observed his popularity and saw the thronging crowds willing and anxious to be healed. So he turned toward Galilee.

Nineteen hundred years later another great spiritual teacher and Leader also experienced the difficulties of presenting to mankind the Christ-way of release from all physical bondage and mental captivity. A reading of the authorized biographies of Mrs. Eddy will tell of her many trials and persecutions and of her overcoming of error through dependence upon and obedience to God.

To return to the account of Jesus' journey through Samaria, we learn that he did not go as a Jew, with pride, fear, despair, or revenge, but as the Saviour of the world, and his divinity was expressed in his compassion and love toward all whom he met. To the Samaritan woman who came to the well for water Jesus revealed himself as the Christ. To one of an alien race did he declare himself. What a lesson this is for us to let our light shine for all without prejudice or partiality and to be absolute in identifying man as the son of God at all times. Jesus voiced the truth without doubting its effect, and in the light of this astounding revelation the woman was speechless with awe. Without even picking up her waterpot she hastened away to share the glorious news with others. The waterpot, or earthen vessel, that she left behind could not possibly hold the living water springing up within her consciousness. This water was the gift of grace satisfying her deepest needs, and available to all mankind. But before it could be received the material senses had first to be unmasked by Soul and their testimony rejected through Christly, compassionate discernment.

In going through our human experience do we stop to give of our rich overflow of heaven-sent good? Jesus had been weary and hungry when he sat by the well to rest, but when his disciples returned from their search for food he did not eat of their provision. Instead, he gave an enlightening discourse on right activity. Only the spiritual refreshment that comes from imparting the truth of salvation's nowness to the humbly receptive could so have renewed him. When the woman returned, she brought with her men so eager to learn of the nature of God that Jesus spent two days with them; and they believed his teaching and acknowledged him as the Christ, "the Saviour of the world." But Jesus did not stay in Samaria; he continued on to Galilee.

Going through Samaria may seem to be a daily human experience. If so, let us watch and pray to let the Mind which was in Christ Jesus be in us. Jesus gave of his understanding without harm to himself, his disciples, or the Samaritans. It is in the practice and proof of divine power that we see the affections of all mankind enriched and find ourselves and others freed from sin and sickness, grief and unhappy relationships, for it is Truth which leads up to the spiritual sense of Soul, to the understanding that man is the beloved son of God.

Mrs. Eddy has written in Science and Health (p. 28), "The trials encountered by prophet, disciple, and apostle, 'of whom the world was not worthy,' await, in some form, every pioneer of truth." And she adds on the next page, "If they keep the faith, they will have the crown of rejoicing." A new student of Christian Science, who had known many joys and victories from its teaching, had occasion to prove this statement when suddenly faced with the painful result of what seemed an inexplicable accident. Denying the suggestion that the condition could be helped only by surgery, and leaning on the strong faith of her new-found understanding of man's sonship with God, she placed complete reliance upon His care. The healing was instantaneous, and the joyous student stopped at the home of a friend to deliver a message just two hours later. When she left, a member of the friend's family asked, "What ever happened to her?"

The friend answered, "I didn't see a thing—except she looked as though she had been crowned!"

As each one goes through Samaria, let him remember man's status and sonship with God and pray that the promise of the Christ may be made manifest in him (Rev. 3:11, 12): "Behold, I come quickly: hold that fast which thou hast, that no man take thy crown. Him that overcometh will I make a pillar in the temple of my God, and he shallgo no more out: and I will write upon him the name of my God, and the name of the city of my God, which is new Jerusalem, which cometh down out of heaven from my God: and I will write upon him my new name." 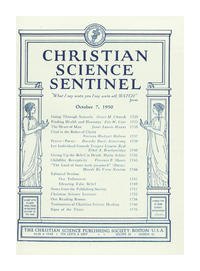