I was around my friend's house for a sleepover and suddenly felt very sick, so I ran into the bathroom. My friend knocked on the door and asked if she could get me anything. I asked her to get my cellphone. My mum always supported me to pray, whenever I had a difficulty, and encouraged me to talk to the Christian Science practitioner who had prayed for me before. So before calling my mum, I decided to call this practitioner. I knew it wasn't right that my sleepover be wrecked. I took a stand and decided that this sickness was like a "sneaky snake" trying to make me believe something bad was true about me.

I rang the practitioner and she told me that I was at one with God, and God was my friend. A friend would never hurt me. So God could never let me be hurt. I hung up the phone, and sat there thinking about what she had said. I thought about how I was the "reflection of perfection," which was something my mum always says.

I looked at the mirror and pretended to poke my reflection in the mirror. Then I said, "That didn't hurt me," and thought of the story of Emperor Constantine that we had talked about in Sunday School. The emperor was told how the mob had thrown rocks at the head of his statue and knocked it off. But he wasn't concerned and just pointed to his head and said that he didn't feel hurt (see Mary Baker Eddy's book Miscellaneous Writings 1883–1896, p. 224). I knew that God is perfect. And since I was His reflection, I had to be perfect, too.

I felt so much better that I never even had to call my mum! So I went and found my friend. She was surprised that I looked so well, especially as she had thought I'd need to go home. She asked me how I could get better so quickly, and so I told her what I had done. Her reply was, "I want one of those healing people, too!"

We went downstairs and had some dessert, and carried on playing, making her bedroom into a tent, and giggling into the early hours of the morning.

I love to hear about your healings!

Lauren enjoys playing the oboe, acting, singing, dancing, horse riding, reading, and writing stories. She is in sixth grade and is enjoying her studies a lot. 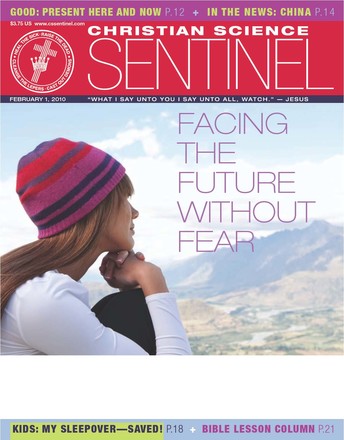 GOD WILL BE THERE

A FUTURE WITHOUT FEAR BEGINS TODAY

YOUR STORIES in these times

FACING UP TO FRIGHTENING IMAGES

THE VALUE OF SHARING

CULTIVATE THE FRUITS OF THE SPIRIT

'WHERE IS MY DADDY?'

FREED FROM ACNE THROUGH PRAYER