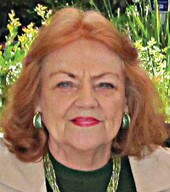 My parents were members of a Christian denomination, and I attended Sunday School growing up. By the time I was ten, I’d asked many questions of both the Sunday School teachers and the minister of the church. I was told that there are many things in the Bible that we aren’t supposed to understand, but I didn’t let that stop me from searching for answers for years.

I became a professional actress and singer. Early on, I was involved in making some commercials, and from time to time there were problems with the script. I noticed the producer would go off by himself for a few minutes, and would always return with the ideal solution. I surmised that the producer must have been praying. I asked him about it one day and his answer was, “Oh, that’s Christian Science.” He invited me to meet him at his church’s Wednesday testimony meeting. Although I did not know what that meant, I decided to go.

During the service, the Reader read passages from the Bible and another book I wasn’t familiar with—Science and Health with Key to the Scriptures by Mary Baker Eddy. These readings answered some of the questions I had been pondering since I was ten years old. Later during the meeting, people from the congregation shared testimonies that made me realize the application of this Science to every aspect of life.

After the meeting I was introduced to a man who was a lifelong Christian Scientist and had made the first cartoon in color and sound. I spoke to him of a cat allergy I’d suffered with for 13 years whereby I’d lose my voice, and for which I took medication. The medication allowed me to speak since my profession depended on my voice. He gave me a card with Mrs. Eddy’s “What Our Leader Says” from page 210 of The First Church of Christ, Scientist, and Miscellany, and assured me, “This will heal you.”

Part of the admonition states: “It is plain that nothing can be added to the mind already full. There is no door through which evil can enter, and no space for evil to fill in a mind filled with goodness.” These statements meant so much to me. I reasoned: When I fill a glass to the top, I can’t get anything else into it. And so, as I fill my consciousness with righteous, good, and loving thoughts, I can’t put anything else in there.

At this moment of realization, the phone rang. It was good friend whose home I could never visit since she had an enormous cat. She invited me for dinner that evening. She knew of my problem with cats, so it was odd that she extended that invitation to me—but she did. I accepted her invitation as my opportunity to prove the statements I’d been reading.

I was told that there are many things in the Bible that we aren't supposed to understand, but I didn't let that stop me from searching for answers.

I had been sitting in my friend’s living room for about 15 minutes with this beautiful cat near me, when all the symptoms I’d struggled with for so long came over me. I looked at the cat and thought: “You have as much right to be here on earth as I do. I would never do anything to harm you, and I know you would never do anything to harm me.” With that realization all symptoms of the allergy left, and I’ve never suffered from that challenge again. Today, I live with a cat.

This healing took place during the Christmas season. When I flew to my parents’ home in Minnesota to spend the holidays, I took a copy of Science and Health with me. On arrival, Dad asked me, “What’s that book?” I replied, “It’s the Christian Science textbook.” He asked me to read some of it to him. He was so fascinated by what he was hearing that he asked me to leave the book with them when I left—which I did.

From that point, there was no looking back. My parents became interested in Christian Science as well, and both had major healings that year—my mom of advanced heart disease, and my dad of a stomach tumor and depression. Everyone in my family came into Christian Science after these healings, including my two brothers.

Since my introduction to Christian Science, every challenge in my life has been handled through spiritual means alone. My gratitude to God, to Christ Jesus, and to Mary Baker Eddy knows no bounds. 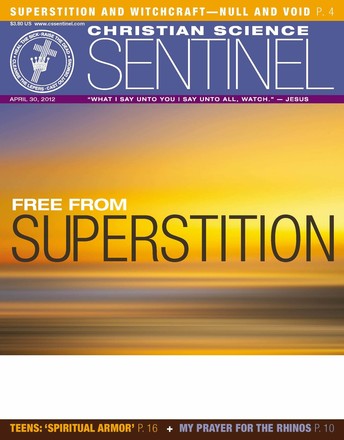 Superstition and witchcraft–null and void

Thoughts aligned with God–not the stars

My prayer for the rhinos

Asking with the heart

'There is no spot where God is not.'

Reprinted from The Christian Science Monitor: What's the hurry?

Insight while flying over Iraq

Of cats and Christianity