You may have heard it’s a way of fixing something that’s wrong. Or that it’s merely an alternative method of health care. These answers have some truth in them, but they don’t begin to tell the whole story. There is more to Christian Science healing, and when we understand what Christian Science really is, healing follows naturally and inevitably.

In order to answer this question more thoroughly, it’s helpful to define Christian Science. Is it a religious denomination? A group of people who generally don’t use conventional medicine? Again, a yes answer to these questions isn’t wrong, but there is more to it. Here is one definition of Christian Science by its Discoverer, Mary Baker Eddy: “It is not a search after wisdom, it is wisdom: it is God’s right hand grasping the universe,—all time, space, immortality, thought, extension, cause, and effect; constituting and governing all identity, individuality, law, and power” (Miscellaneous Writings 1883–1896, p. 364). That’s a very big statement. But for me, it’s been a helpful way of thinking about Christian Science because it lifts our understanding of this Science beyond a fix-it mode to what it reveals about the divine Principle, God, that governs His own creation.

What Mrs. Eddy discovered and described is spiritual reality—beyond the scope of the physical senses. This was the same reality Jesus perceived two thousand years ago, and preached to his followers when he said, “The kingdom of heaven is at hand” (Matthew 3:2). In her textbook on Christian Science, Science and Health with Key to the Scriptures, Mrs. Eddy articulated the nature of this reality, including its spiritual laws of health, continuity, and harmony—which, when understood and put into practice, bring healing.

This reality is purely spiritual, perfect, free from disease and sin. It is created and governed by God. This universe of divine Spirit doesn’t exist alongside what we perceive as the material universe; it is the only real, true existence. Anything other than this perfection of spiritual being is a limited and false perception. Although this pure, ultimate reality might not always be apparent, it nevertheless exists, and we see glimpses of it­—like the light we see when the sun breaks through the clouds. These moments of illumination are where healing happens.

Healing is the natural result of becoming aware of God’s presence.

So what do we do when we have a problem? There are several ways to approach it. It’s common to think we have to find a solution for it, or apply a healing remedy. But a deeper look at what Christian Science healing really is gives us another option. In my own practice, I’ve found that the real deal is striving to understand and live in such a way as to keep my thought open to God’s presence and power. Prayer is often the vehicle through which this takes place.

Prayer can lift our thoughts Godward. Mrs. Eddy devoted the first chapter of Science and Health to the “how to” of prayer. But here’s what makes her explanation of prayer unique: Rather than seeking to “fix” some problem, the intent of prayer is to open our thought to a recognition of spiritual reality—to become aware of God’s ever-present goodness. When this happens, we experience, right where we are, the reality of God. The harmony and beauty of an entirely good God become tangible. What is unlike good fades from consciousness; it no longer seems real to us. And healing is the natural result.

Years ago I had a profound experience that taught me a lot about what healing is and how it happens. On this occasion I wasn’t seeking healing, but it happened anyway—effortlessly.

The beauty and harmony of God’s creating can be experienced right where we are.

It was a cold day, and I was sitting on my bed, wrapped in a comforter, reading Science and Health—specifically Mrs. Eddy’s spiritual sense of the twenty-third Psalm, which emphasizes the infinite and all-pervasive nature of divine Love (see Science and Health, p. 578). When I finished reading, I felt Love all around me. It was a feeling of being in exquisite light.

Right then, my phone rang, and it was my sister. Her call was a surprise because, though we lived in the same large city, we were rarely in contact. She poured out a list of troubles, which included being out of money, without a job, and afraid of being evicted from her apartment. As she was talking, I was thinking about the amazing nature of Love, and that since Love is everywhere, it had to include her, too. As our conversation progressed, I was very aware of God’s presence. At one point I said something like, “Maybe you could expect something good to happen.” She was annoyed and hung up.

Several hours later, she called again and told me that she had been offered a job and that her financial needs would be met. But that wasn’t all. Two weeks later she came to my apartment with a bunch of yellow daisies. She said that during our phone conversation something extraordinary had happened. She then told me she’d been addicted to heroin. She had been “mainlining” (injecting herself) daily. I’d had no idea. After that phone conversation, though, she suddenly felt free of the addiction. She had originally called me to borrow money for a fix, but then realized she had no more desire for heroin. There were no withdrawal symptoms. She was simply free. She waited two weeks to be sure. That afternoon she asked me, “What in the world was going on during that phone call?”

I was amazed. I hadn’t been praying to heal anything. All I was doing was experiencing God’s love, which I’d known was present for everyone, including my sister. And yet, something that needed healing had naturally been corrected.

This experience convinced me that the healing work Jesus and Mrs. Eddy did resulted from their consistent, conscious dwelling in that abiding sense of God’s love. Healing is the natural effect of letting our own thoughts go deep into the infinite.

Can we do this? Jesus assured us that we can, and so did Mrs. Eddy. The spiritual reality of God’s creating can be experienced in all its beauty and harmony right where we are. It is real and glorious. We can consciously bear witness to this presence right in the face of discord and see evidence that the power of God prevails. Disease and sin yield to this power and disappear. Then we actually experience “God’s right hand grasping the universe,” and we find ourselves, and our world, held securely in that loving embrace. 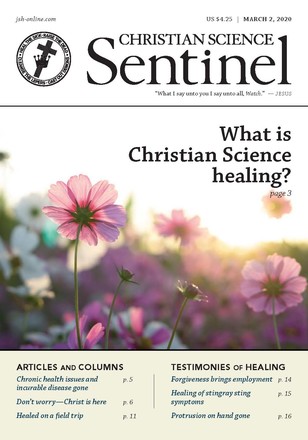 Answering the call of hungry hearts

Healed on a field trip

God was there when I needed help

Naaman and the child

Dialing down our digital distractions