About two years ago I had wonderful...

About two years ago I had wonderful proof of the effectiveness of Christian Science in accomplishing mental surgery by healing broken bones and internal injuries and overcoming the effects of shock. I was struck down by a speeding automobile as I was crossing a downtown street.

The Christ is here, all dreams of error breaking,

Unloosing bonds of all captivity.

On the street, at the emergency hospital, and later at a second hospital, I refused medical treatment, explaining that I was a Christian Scientist and that we work things out differently. During the first day the staff doctors, nurses, and a surgeon called in by my company anxiously insisted on medical treatment. Each of their dire predictions was instantly denied in a loving way, and their good intentions were acknowledged.

A surgeon who had witnessed the accident proved to be a dependable friend during the entire experience. He had been chief surgeon of a large Army hospital in the Philippines and had seen the effects of prayer when no other means were available. He respected my choice of treatment and many times would say, "This is America; you have the right to decide for yourself what you think is best for you." My first request at the hospital was for a Christian Science Hymnal, and it was obtained from the nearest Christian Science Reading Room by the young man who ran over me. The hymns were a constant source of inspiration, and although I was not able to hold the book at first, others would read a line at a time to me, and I would sing it back to them. I felt the sustaining power of Truth from the start and all through the experience. Every day serious problems were worked out entirely with the help of the practitioner, and I felt a great confidence in and unity with God.

At the end of three weeks, I felt enough progress had been made to allow X-ray pictures to be taken. This seemed necessary to allay the fears and satisfy the demands of my own office and the insurance company. The X rays were interpreted as indicating that up to 20 percent permanent disability would result from an impacted fracture of the hip and internal injuries. The left arm and shoulder were limp and almost helpless. Three weeks later additional X rays caused the surgeon happily to exclaim: "The pictures are wonderful! They show a perfect healing is taking place, and there may be no disability."

During this time the first distress of the nurses had changed to curiosity and interest. Several of the head nurses, seeing me with the Bible and Christian Science literature, remarked, "Those will do you more good than anything else."

One alarming condition did not seem to yield to Christian Science. After consultation with other specialists, the surgeon recommended an operation, as one lung was useless. I prayed earnestly to God for guidance, and a great desire came over me for the peace and healing atmosphere of the Christian Science Benevolent Association Sanatorium at Chestnut Hill, Massachusetts. The surgeon kindly agreed to release me from the hospital, and although it was a busy time at the Sanatorium, for it was about the time of Annual Meeting of The Mother Church, I was accepted as a patient. Slightly less than a week after my arrival I was able to walk without crutches. At the end of the second week I returned home and went back to work immediately, and I have not missed a day since. During the year that followed there were many aftereffects to overcome, but these were all completely vanquished through Christian Science.

I am very grateful for this wonderful proof of God's care, for the consecrated work of the practitioner, and the kindness of friends. Truly the Christian Science Benevolent Association Sanatoriums are places of refuge for those who are wounded in body and spirit. How thankful I am for the loving care of the workers there! The atmosphere of love and peace and the high standards maintained in every detail should be cherished by Christian Scientists.—HAROLD R. RANDOM, Atlanta, Georgia.

Send a comment to the editors
NEXT IN THIS ISSUE
Testimony of Healing
I first took up the study of Christian Science... 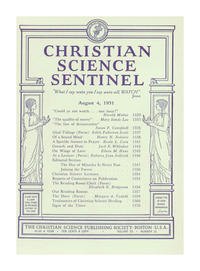