It is with deep gratitude that I share a healing...

KATHRYN LOUISE MERRILL with contributions from GREGG B. MERRILL

It is with deep gratitude that I share a healing which brought great spiritual growth in our family.

For five summers my husband and I worked at a camp for children who are students of Christian Science. One morning I received a phone call from my husband, saying that he felt ill and asking if I could come to the Christian Science nurse's headquarters right away. (Later he told me that he had crawled there on his hands and knees and, unable to find the nurse on duty, had called me.)

I arrived and found him unconscious, facedown on the floor. When he became semiconscious some moments later, he complained of numbness, an inability to move, and pain.

A wave of fear swept over me. Next the suggestion came that I should call an ambulance and get my husband to help as quickly as possible. Then the angel message came, "Is there any greater help or power than God?" I realized that I had, right then and there, all the so-called emergency help I would ever need. I felt ready to take a radical stand for Christian Science by relying completely on God.

As I began to pray, many familiar truths came to mind. Two verses from Psalms calmed my feelings of turbulence (46:1, 10): "God is our refuge and strength, a very present help in trouble. ... Be still, and know that I am God."

I prayed earnestly to know and feel God's all-powerful presence; to understand that He was, right then, being expressed—regardless of the human picture. I knew that God loves and cherishes man as His spiritual idea, and therefore that never, even for an instant, had my husband been out of God's loving protection. Gradually the fear quieted, and I felt a conviction that God was in control, that His law of good was the only real law in the case, and that this law of harmony was operating in my husband's behalf.

When I returned to where my husband was, nothing physically had changed. The nurse and I spoke aloud some simple truths we felt he would respond to. He made every effort to claim who he was, as the spiritual idea of God. He also tried to repeat the Lord's Prayer and "the scientific statement of being" from page 468 of the Christian Science textbook, Science and Health with Key to the Scriptures by Mary Baker Eddy. We could feel his determination to rouse thought and challenge this lie about man, although at this point his speech was still fairly unintelligible. Soon his condition became more stable, and we moved him to a bed. There he fell asleep.

All afternoon the practitioner and I continued to pray. One statement from Science and Health I worked with that afternoon was this (p. 417): "Maintain the facts of Christian Science,—that Spirit is God, and therefore cannot be sick; that what is termed matter cannot be sick; that all causation is Mind, acting through spiritual law. Then hold your ground with the unshaken understanding of Truth and Love, and you will win. When you silence the witness against your plea, you destroy the evidence, for the disease disappears. The evidence before the corporeal senses is not the Science of immortal man."

A nagging sense of false responsibility gradually began to disappear. I started to see that I wasn't the one who was doing the healing. It was Truth. My only responsibility was to keep my own thought clear, to recognize my husband's true nature as God's child—perfect, whole, and complete. The burden lifted, and the realization came that this was an opportunity to prove God's allness—and that's all it was. A great sense of calm and peace came over me. I knew the healing had taken place.

Toward evening my husband turned over in bed, woke up, and spoke to me clearly. Later that evening he got up and walked with me down to our cabin. The next day he was back at work. Since then—and this incident occurred several years ago—he has been in consistently good health.

This healing was a turning point in my understanding of Christian Science. I can never express enough gratitude to God for the precious gift of salvation and healing that has come to us through our Master, Christ Jesus, and been explained in the writings of Mary Baker Eddy.

The healing mentioned above was indeed a wonderful example of God's law in operation. Initially the physical picture was very alarming. And during this time I was in and out of consciousness. But I can remember feeling the need to stay alert and receptive. Although I was raised in Christian Science, at times I'd doubted my own ability to rely on God in a so-called emergency situation. However, every erroneous claim was met through relying totally on Truth. I'm grateful for the loving support of my wife and the healing environment of the camp.

Send a comment to the editors
NEXT IN THIS ISSUE
Testimony of Healing
I wish to express my deep gratitude for a healing I had about... 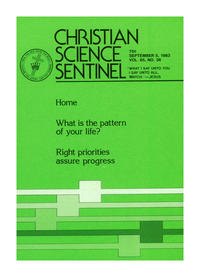