For the good of the volleyball team

I am often asked how tall I am, and I always respond 5 ft. 14 in. Something about this witty remark makes people laugh, but when I was younger, it wasn’t always funny to be the tallest person in my class. I decided to make my height useful, so I started playing volleyball in seventh grade.

When I got to high school, I was so excited to be part of my school’s Division One volleyball program. Last year my varsity team ended the season with a 20-2 record and the New Hampshire State Championship title. This past fall, as my final high school season approached, I metaphysically prepared for tryouts (everyone had to try out again) with the ideas of God’s harmony and being in my right place. To me, this means that when we listen to spiritual intuition—listen to what God’s telling us—things sometimes work out differently from what we’d planned. But God always knows best—knows what we need.

I again made the varsity team, and it was clear early on that we were the favorites to be state champions again. Early in the season, my teammates were discussing a Halloween party the group was planning to have. The party was supposed to have costumes, awesome music, and many of my senior friends and teammates would be there. But it was also going to have alcohol. I had already decided I wasn’t going to attend because I don’t drink.

I knew my school has a zero tolerance policy when it comes to underage drinking. My teammates, even the ones who were planning to attend and not drink, could be kicked off the team if they got caught. If that happened, our chance for winning the state championship would be ruined.

As the weeks went on, the party was all that the seven other seniors on the team could talk about. It seemed like one bad choice made by others could prevent us from succeeding, and there wasn’t much I could do about it.

Before every game, I’d been praying about the idea that injuries didn’t have to ruin our chances of excelling at volleyball. God was right there governing and supplying us with the strength we needed. I’d often read sports articles from the Sentinel and The Christian Science Journal—especially the teen articles—every week and go back to some of my favorites. And so, even though I wasn’t specifically praying about what was going on with the Halloween party plans, I think my prayers about team harmony were coming together to support the idea that God was in charge.

I needed to be reminded that there are other people who don’t base their fun on drinking, and also that I could have support in knowing God had a good plan.

As our team kept winning games, our fan section increased, and so did the guest list for the party. It seemed probable that with all the people who knew about it, administrators would find out and the entire team would be barred from playing the rest of the season.

Our last regular season game was the hardest for me because the team was all sitting together talking about what they were going to wear to the party, and it was scary to think that the girls’ decisions might get us kicked out of play-offs. I moved farther down the bleachers to calm my thoughts. There seemed to be two options—either the party would take place and my friends wouldn’t get caught (but that didn’t seem ethical), or my teammates would get caught, lose scholarships, and the team would be barred from playing.

That same night, I told my mom what had been going on. I also texted one of my friends who is a Christian Scientist because I needed to be reminded that there are other people who don’t base their fun on drinking, and also that I could have support in knowing God had a good plan, and it wasn’t up to me to push for a solution. I needed to listen to God.

The party was going to be held right after one of our play-off games. We were still undefeated, and everyone was excited to continue on to the semifinals. Before the game, my mom and I read that week’s Christian Science Bible Lesson. I was struck by one story in particular. It was the story of Lot, his wife, and his two daughters, who were saved from the destruction of the cities of Sodom and Gomorrah (see Gen. 18:20–32). In this story Abraham asked God if He would save the righteous in the city. God answered yes. This story reminded me that God would always save the righteous. God sent angels to lead Lot’s family to safety, and I needed to trust that God would save me and my team from the destructive nature of the party.

Something else that related is from Science and Health: “Love inspires, illumines, designates, and leads the way. Right motives give pinions to thought, and strength and freedom to speech and action” (p. 454). I thought about how my motives in playing my best and obeying the laws about underage drinking could only bless, not punish. With these reassuring thoughts in mind, I left for what was potentially my last high school volleyball game. I was calmer, but I still did not know how God’s plan would unfold.

Moments before my team took the court for warm-ups, a teammate told me that the party wasn’t happening after all! Instead, there would be a team scavenger hunt with our fans. The weight was lifted off my shoulders with those words. I still don’t know why the party was canceled, but we were all protected.

That night we all bonded and had fun. I expected my pre-season prayers about harmony to benefit me, but I realize that they benefited everyone.

Our team went on to win another state title—this time undefeated!

Lyssa Winslow will be attending Principia College in the fall. She also competes in track and field and is spending her summer as a sports counselor at camp. &nbsp; 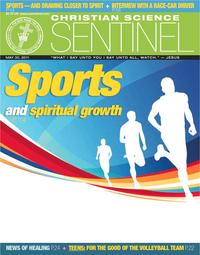