Christian Science draws a distinction between personality, as generally understood, true individuality, and identity. Personality in its usual meaning relates to the false sense of man, that is, to the mortal and material; individuality and identity to the real, the spiritual man, whom God creates. We learn that the word "personality" derives from the Latin word personare, which signifies to sound through, personare itself being derived from per, through, and sonare, to sound, terms used in relation to the mask (persona) worn by players on the stage to represent a makebelieve character. How appropriately, then, does the term "person" represent a counterfeit of something, and that something, the real man! We may, then, justifiably inquire regarding the nature of spiritual man, which a person, the material sense of man, counterfeits. In other words, What are true individuality and identity?

This query turns us to the Christian Science textbook, "Science and Health with Key to the Scriptures," where on page 513 Mrs. Eddy writes, "Spirit diversifies, classifies, and individualizes all thoughts, which are as eternal as the Mind conceiving them." Here, manifestly, the word "thoughts" is used in the sense of ideas, since Mind's thoughts must of necessity be ideas. Furthermore, we learn that ideas are, first of all, diversified, that is, they differ one from another. These ideas are also classified according to their several characteristics; but each idea possesses its own specific qualities and its own form or mode of expression. In other words, each idea is individualized.

Now "individual" means, primarily, "not divided"; and individuality implies the possession by an idea of that which is characteristic of it and which cannot be taken away or separated from it.

Identity has as its root meaning. "sameness," in the Latin word idem, meaning the same. An idea of divine Mind never changes its inherent characteristics. This applies to the compound idea man, no less than to each lesser idea which man includes. In the light of this reasoning, man is seen to be both perfect and permanent; perfect, because only that which is perfect can reflect God; permanent, because as God's idea his identity is eternal. The imperfect, which has no place in God's creation, being but a figment of the imagination, a seeming product of a false material sense, cannot endure: there is no stability, no permanency, in the unreal.

Jesus' vigorous denunciation of the Pharisees plainly implies the falsity, therefore, the unreality, of the material or finite personal sense of man: "Ye are of your father the devil, and the lusts of your father ye will do. He was a murderer from the beginning, and abode not in the truth, because there is no truth in him. When he speaketh a lie, he speaketh of his own: for he is a liar, and the father of it." In Moffatt's translation of the Bible the last clause reads, "When he tells a lie, he is expressing his own nature, for he is a liar and the father of lies." Words could scarcely express a more definite denial and condemnation of the material sense of man. The conclusion is unmistakable. The nature of material man is false. His origin is a falsity, a myth, the devil—a lie. Hence the material, personal sense of man is without foundation in Truth; it has no origin in God, no individuality, no identity. When this conclusion is arrived at, how erroneous, how futile, to hold aught but Spirit and its formations as possessed of any degree of reality!

Other statements of the Master corroborate this conclusion. Paul, likewise, was assured as to the facts. "The carnal mind is enmity against God," he declared. That is to say, the false beliefs which constitute the so-called carnal or material consciousness are directly opposed to, at enmity with, the infinite Mind, God, and the universe of spiritual ideas. Again, as Paul says, "To be carnally minded is death; but to be spiritually minded is life and peace." How important, then, to lay off the "old man," the carnal beliefs which may be characterized as personal sense, and to lay hold of the spiritual facts regarding the nature of God and man's true individuality and identity.

On page 477 of the Christian Science textbook, the question is asked, "What are body and Soul?" In the reply identity is defined, implying that the real man's individuality and identity are the same. Man is the embodiment of all right ideas. He thus includes all true qualities, attributes, and characteristics; these constitute individual, spiritual man. Therefore, identity may be defined as the unity and continuity of the qualities and attributes which constitute the individual.

To those who have not gained some understanding of the real man's nature, his perfection and permanency, it might seem that losing the personal or material sense of man would plunge one into oblivion. But Christian Science definitely declares to the contrary. On page 302 of Science and Health we read this definite statement: "The material body and mind are temporal, but the real man is spiritual and eternal. The identity of the real man is not lost, but found through this explanation; for the conscious infinitude of existence and of all identity is thereby discerned and remains unchanged. It is impossible that man should lose aught that is real, when God is all and eternally his." What seems to be loss is but the passing away of finite personal sense, which, with all its falsity, is succeeded in Science by that which is incomparably precious, the consciousness of man's true identity as the son of God. Then loss, indeed, becomes priceless gain; nothing of true value is lost. All that is gained is perfect and permanent.

Copyright, 1933, by The Christian Science Publishing Society, One, Norway, Street, Boston, Massachusetts. Entered at Boston post office as second-class matter. Acceptance for mailing at a special rate of postage provided for in section 1103, Act of October 3, 1917, authorized on July 11, 1918. 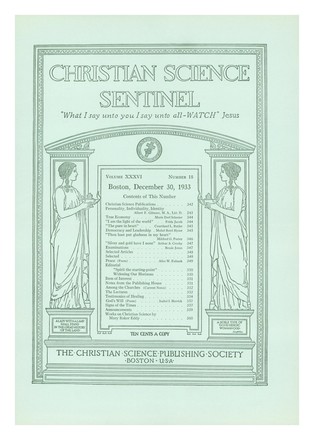 "I am the light of the world"

"The pure in heart"

"Thou hast put gladness in my heart"

"Silver and gold have I none"

Two letters in a recent issue of the Advertiser under the...

Thomas A. Wyles, Committee on Publication for South Australia, in the | December 1933

In your issue of the 9th, which contained a report...

Alfred Johnson, Committee on Publication for Yorkshire, England, in the | December 1933

Only one whose information was obtained from unreliablo...

W. Archibald Wallace, Committee on Publication for the State of West Virginia, | December 1933

Your correspondent in a recent issue again expresses his...

The Committee is happy to report steady progress during...