All that is real proceeds from God, good, and moves in accord with His loving will. He is the origin of all substance, knowledge, and action. All genuine being is controlled by God, infinite, divine Mind. As one reasons from this premise taught by Christian Science, one must conclude that God is the only communicator to His idea, man, and therefore only good is communicable.

We constantly hear that evil is communicable. The news media, advertising medical theories, spread the belief that a material body manifesting symptoms of disease can contaminate another material body and cause it to manifest the same distressing symptoms. Christian Science refutes this false belief by demonstrating the truth that life and action are spiritual, not material, and that man can experience only what God expresses. Man's real being can no more be contaminated by false, material concepts than light can be contaminated by darkness.

If matter moves, thought moves it. It has no intelligence or volition of its own. When one understands this, he can clearly see that an individual suffers not from a disease transferred to him by another individual but from the belief that there is a thing called communicable disease to attack him, make him sick, and even destroy his life. His protection, then, lies in understanding that there is no entity called disease, communicable or isolated.

Let us say that you have a friend who believes in ghosts. You see not only the mental but the physical distress he experiences because of his belief—faster heartbeat, chills, sleeplessness. But you yourself do not believe in ghosts; so you have no fear of catching the physical symptoms of fear your friend is manifesting, however real they may seem to be.

In like manner, if one is an earnest student of the Science of Christ, Truth, he should not fear catching the symptoms of suffering of someone who believes in the reality of disease. If he understands the allness of God and the nothingness of evil, he cannot be mesmerized by the appearance of matter to believe that disease is real or can be communicable. He knows that there is no mind apart from God capable of creating evil and using it to contaminate God's perfect creation. He recognizes one Mind, which is constantly imparting to its ideas strength, health, joy, and spiritual power.

In Science and Health by Mrs. Eddy, we read, "You will also learn that in Science there is no transfer of evil suggestions from one mortal to another, for there is but one Mind, and this ever-present omnipotent Mind is reflected by man and governs the entire universe." Science and Health, p. 496

We cannot fear catching disease unless we first believe that it is a true part of someone else's being. We immunize ourselves by refusing to accept as true or powerful the material sense testimony that another is sick. This immunization is accomplished through spiritual sense, which perceives man's true spiritual identity instead of the physical disabilities apparent only to the material senses. One actively engaged in learning of God and loving His spiritual ideas can refuse to be overwhelmed by error. Mrs. Eddy counsels her followers: "Beloved Christian Scientists, keep your minds so filled with Truth and Love, that sin, disease, and death cannot enter them." The First Church of Christ, Scientist, and Miscellany, p. 210

Instructed by Christian Science, one can see that disease is a term used to describe mortal mind. Ignorance, hatred, envy, fear, resentment, jealousy, impatience, pride, and so forth are indeed dis-eased. But when one spiritualizes his consciousness with Godlike qualities such as understanding, love, peace, compassion, patience, forbearance he begins to experience greater ease, or comfort. Thus he learns that disease is not in matter and cannot be transferred by matter from one person to another. He no longer thinks of himself as a helpless victim of mortal mind but knows that he has Truth's power to reject the belief of a mind apart from God and thus annul any claim of evil to be transferable.

Obeying the First Commandment, "Thou shalt have no other gods before me," Ex. 20:3 we refuse to fear and bow down to the constant aggressive suggestion that disease is a destructive, material power that can communicate itself. The belief that disease is communicable stems from the Adam-dream that matter can be created and made the basis of many divided forms of life—some good, some bad.

Life is God, good, and His manifestation is infinite. There is no such thing as bad life, which mortal mind names virus, disease germs, and so on. And divine Being cannot be divided into separated beings capable of communicating bad life. The individualized manifestations of God can never be separated from God by an error of belief. A false belief cannot invade God's spiritual universe and disrupt its harmony. All that ever suffers is the belief itself.

We read in Science and Health: "God never punishes man for doing right, for honest labor, or for deeds of kindness, though they expose him to fatigue, cold, heat, contagion. If man seems to incur the penalty through matter, this is but a belief of mortal mind, not an enactment of wisdom, and man has only to enter his protest against this belief in order to annul it." Science and Health, p. 384 God, expressing Himself through man, is the only self-existence. All movement is governed by Him. Therefore only good can permeate man's true consciousness and being and be communicable. 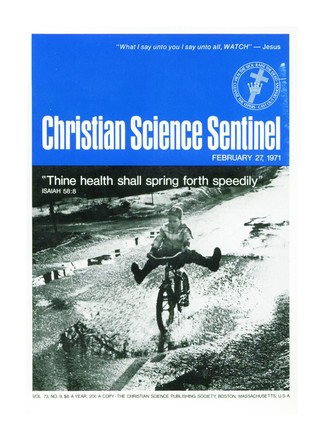 The Basis of True Health

Only Good Is Communicable

The Most Effective Doctor

Facing Up to Conflicts

A Precious Volume in Indian Territory

IN TIME OF ISAIAH: PROPHECY

For the Health of Your Children

Inspiration for the Writer

I wish to express in this testimony my gratitude for divine Love's...

I am very grateful that when I was a small child my mother was...

Through the study of Christian Science I have had many...

I am wholeheartedly grateful that I was led to Christian Science...

Many years ago my mother was searching for a religion that...

One night as I was preparing for bed, I suddenly became ill....

By Rhea Foy with contributions from Milton W. Foy | February 1971