In Roseland, one of Chicago’s most dangerous neighborhoods, many residents stay off the streets to protect themselves from rampant gang violence. But one grandmother opened her door and invited gang members to come inside.

“They say I’m a nut because I let kids into my home who I didn’t even know,” said Diane Latiker, 54. “But I know [the kids] now. And I’ll know the new generation.”

Since 2003, Latiker has gotten to know more than 1,500 young people through her nonprofit community program, Kids Off the Block. And she hopes that by providing them with support and a place to go, she is also bringing hope to a community in crisis.

“We are losing a generation to violence,” said Latiker, who started the program in her living room. . . . She wanted to focus on being a grandmother and rebuilding her relationships with her older children. But after thinking and praying about it, she decided to make use of the natural rapport she had with young people.

“I invited them into my living room,” she said. “They all started saying: ‘I want to be a doctor. I want to be a rapper. I want to be a singer.’ They didn’t want to be out there running up and down the street. They wanted to be involved in something.”. . . Kids Off the Block was born.

“It doesn’t matter where they come from, what they’ve done,” Latiker said. “We’ve had six gangs in my living room at one time. . . . But that was the safe place. And you know what? They respected that.”. . .

In 2008, just when Latiker thought her home would burst at the seams, some potential donors came to her home for a visit. Impressed, several of them pooled their money to buy a bus for the program. But a few days later, Latiker learned the building next door was for sale—for the same price as the bus.

“I prayed about it and finally called the donors and asked if the money for the bus could be spent on the building next door instead,” Latiker said.

Maurice Gilchrist, 15, is one teenager who credits Kids Off the Block with turning his life around. Gilchrist joined a gang when he was 12, and he says life in a gang meant looking behind his back every day. “We always used to jump on people, rob everything, steal,” he said.

Gilchrist discovered Kids Off the Block when he went to Latiker’s house after school with a friend, Latiker’s grandson. . . . Today, Gilchrist’s grades have improved and he has set his sights on playing football in college. Without Latiker and her program, “I would be locked up, [or] dead, somewhere beat up, in a hospital,” he said. “You name it, I would be there. Miss Diane, she changed my life. I love her for that.” . . .

“Our young people need help,” Latiker said. “All of them are not gang-bangers. All of them are not dropouts. But the ones that are, they need our help. Somehow or another, something ain’t right here. And why don’t we ask them about it?” 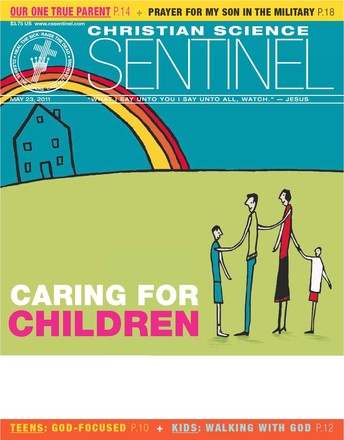 Guided by our shepherd

Find refuge and safety in the Allness of God

A spiritual defense of human rights

Our one true Parent

By Kim Shippey with contributions from Julia Espey | May 2011

Prayer for my son in the military

Trust God, put self aside