A spiritual investment in our life savings

When a husband and wife lose their nest egg, they turn to God and find their needs met in unexpected ways.

BY DOUG AND ANN C. BROWN

In the spring of 2008, my wife and I grew suspicious about the validity of a business we had invested in. By fall, the FBI had arrested the head of the company, and it became evident that our investment would not be returned. We had put virtually all of our "nest egg" into this investment, and all of our savings were lost. It was a sobering time. We immediately began doing all we could to cut expenses and to avoid going into debt. I didn't know it then, but within a couple of months, my job in sales would be terminated.

From the beginning, my wife and I prayed. Having semiretired years earlier, we depended on the invested money to cover a majority of our day-to-day expenses. Without that pool of money available to draw from, we were unsure how bills would be paid. We immediately stopped all unnecessary expenditures and figured out ways to cut or reduce the fixed expenses in our budget.

Three small signs represented God's care for us and quickly gave us something to be grateful for. First, we received an unexpected payout from this corrupt investment, which covered almost the exact amount of a larger-than-expected tax bill. Then, a catalog company gave my wife a modest credit on a purchase. Finally, we found a bike at a yard sale selling for $25.00, which we got for free because it needed about $20 worth of repairs. When I asked a neighbor to lend me some tools to repair the bike, he offered to do the repairs for free.

There isn't a Christian Science church close to where we live, but my wife and I take time on Wednesday evenings to share inspiration from the Bible and Science and Health and other books we're reading, and to share gratitude for the good received each week. One particular Wednesday, although I felt as if I'd remained calm over the past months since our investments were lost, I could feel the fear mounting within me. What changes would we need to make? How could we cover expenses?

I shared my concern with my wife, and she started to read citations from the Bible. She read several, but the first one stood out. It was all I needed. It changed my perspective about the problem 180 degrees. She read, "For whosoever hath, to him shall be given, and he shall have more abundance: but whosoever hath not, from him shall be taken away even that he hath" (Matt. 13:12).

"Whosoever hath" gets more? I was thinking that I was a "whosoever hath not" and that therefore I was in the line for getting more. But the answer was completely opposite: "For whosoever hath, to him shall be given."

I thought of this in terms of spiritual qualities. If to have is to be given, then I had to ask myself, "Well, what do I have? What can I share or give?" It seemed so easy. Even though it seemed we had nothing, I could still give. And expressing what I had was all I had to do—divine law would provide as long as I obeyed. So I began looking for opportunities to give.

Children in our neighborhood wanted to study English, so my wife and I started an English drama class twice each week, and in December the children performed a Christmas play at a kindergarten and a local hotel. At the same time, a friend's custom woodworking business had slowed, so I offered to contact homeowners who might need some wood maintenance done, and the business grew.

We'd also been looking for a solution to hard water in our area and found a product that worked so well that we eventually became a distributor for our community. This led us to begin a maintenance business.

After one year, our financial situation normalized and turned around. During that year, we were able to save money, do house repairs, and send our kids to summer camp. I credit Christian Science for this change because it has taught me that the Bible has the solutions. One of the tenets of Christian Science says, "As adherents of Truth, we take the inspired Word of the Bible as our sufficient guide to eternal Life" (Science and Health, p. 497).

I'm confident that God provides. I feel that I've found a law that I can always trust in. Even though nothing has been recovered from that investment, I'm completely free of any thoughts of reminiscing or of wondering how it all went wrong.

When I shared this experience with a friend, he asked, "How did you get over that fear that was mounting up in you?" I had to think a bit, and then the answer was so evident. The promise from the Bible passage completely captured my focus. When what I already had to give became my focus, fear wasn't in the picture anymore.

As the reality of our tough financial situation became clearer, I started feeling extremely anxious, to the point where I was unable to sleep at night. I was angry, frustrated, resentful, and most of all, very scared. Since I'd practiced Christian Science all my life, a prayerful approach to a solution seemed the securest way for me to move forward. I spent night after night reading the weekly Bible Lesson in addition to the writings of Mary Baker Eddy, as well as testimonies and articles in the Christian Science periodicals. What I read gave me plenty of food for thought and calmed me down enough so that I could rest peacefully for at least a few hours each night.

Yet, the problem of sleeplessness, and anxiety about our situation, didn't go away. It hung over me moment by moment. I felt trapped and victimized. I turned wholeheartedly to God, asking Him to show me how I could calm down so I could think clearly, and what I could do to help.

As I prayed, I recall this idea coming to mind: "Simply be obedient to every thought coming from God." I didn't hestitate. I watched every thought that came to me to make sure I was accepting only those which were God-driven and not those that were generated by the media, which at the time was reporting disastrous results of a fallen financial market in the US. I wrote down spiritual ideas that came to me as I prayed. I acknowledged myself to be God's child, His reflection, imaging forth His qualities of goodness and safety.

I made it a point to handle the sense of fear that seemed overwhelming at times. I heard how in the past the financial markets were driven by fear and greed. In fact, I saw how I had become subject to that mind-set at times. But now, through my prayers, I also saw how by relying on God, I could overcome, or let go of, these threatening claims, since they never originated in God. Science and Health says, "Hold thought steadfastly to the enduring, the good, and the true, and you will bring these into your experience proportionably to their occupancy of your thoughts" (p. 261).

At one point, I recall reading a testimony in one of the Christian Science periodicals about a couple who were financially struggling. They bought an inexpensive item at a yard sale and later unexpectedly found valuable coins in the bottom of the box the item was in. The amount of money they received when they sold the coins was enough to pay a debt that was due. I remember thinking, "If only that sort of thing could happen to us." However, I realized it was the couple's confidence in God and His care for them that allowed them to find a solution. It became clear to me that I needed to stop wishing something would just magically turn this financial trouble around. I needed to go deeper in my reliance on God and learn the true source of supply.

I have always loved Hymn 148, so I copied and taped the words of the hymn to my kitchen cabinet, and read and thought about their message daily. Every line spoke to me as if it were written just for me. One day I realized, although similar, there was a difference between the lines at the end of the second stanza and the lines at the end of the third stanza. The former read, "He knows the way He taketh, / And I will walk with Him." To me this meant I was to follow God's direction instead of my own confused sense of what should be done. It directed me to commit my every step (every thought) to Him. The third stanza reads, "My Father has my treasure, / And He will walk with me." This showed me the commitment God had to me. It was a promise of a "treasure" He had for me.

I also saw that I couldn't hold on to the resentful thoughts I had surrounding the individuals who had brought us into the investment scheme. If God was supplying me with only that which was good, then I had to let go of any thoughts that were contrary to good to experience the goodness God was giving me.

On page 423 in Science and Health, Mrs. Eddy states, "Both Science and consciousness are now at work in the economy of being according to the law of Mind, which ultimately asserts its absolute supremacy." Wow! This helped me realize that God was the One handling all of existence, including income, or "supply." Real supply didn't come from me or my husband, and certainly not from the world economy. Supply comes from Mind. When I read that, I found it gave me confidence and a solid conviction that God was indeed in control. He was acting on my, and everyone's behalf.

With this greater spiritual understanding, I felt sure a solution would come about. In fact, it did. My husband was able to find work helping our community, and we started a small business as a result. We find that our understanding of God's supply for us isn't tied to material things or money but to our recognition of God's ongoing love and direction. My wealth truly is in my understanding of what God is doing right now in my life. He's always supplying me with right ideas, opportunities to prove His abundant nature and share His love. And that's what defines us as prosperous individuals. css 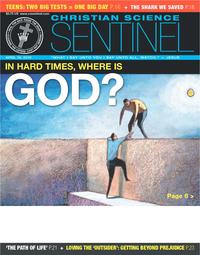