Last year, on the last day of school before final exams, I got an insight into the concept of God’s “true light.”

The Sunday before, I started getting a headache. My first thought was to just forget about it and go on about my day. As the day went on, though, the headache never really ceased. The next day was a study day in my classes, and I was planning on studying in groups with some friends. Throughout the day the headache seemed to be getting worse, but since I was so focused on studying, I just went about my day as usual.

Later that night I was on my way to a study group, and I found myself in a lot of pain. I really needed to prepare for my finals the following day, but as I sat in the room, I was not able to really comprehend anything. I felt fearful, not only because I could not concentrate on the material in front of me but because of the pain. I realized I had become very sensitive to light.

My friends were really supportive. When I decided that maybe I should go back to my room and rest, two of them helped me across campus. They were Christian Scientists as well, and they also shared helpful spiritual ideas with me and sang Hymn 412 from the Christian Science Hymnal to me: “O dreamer, leave thy dreams for joyful waking . . .” (Rosa M. Turner). This was helpful as I tried to bring myself back to reality. I lay down in my bed and tried to refocus my thoughts.

It occurred to me that one of the terms often used to refer to God is light—for example, in Science and Health Mary Baker Eddy wrote, “Man is not God, but like a ray of light which comes from the sun, man, the outcome of God, reflects God” (p. 250). But honestly, at that point I was scared because it seemed to be the light that was making my head hurt so much. I wondered, If I feel comfortable and stable only in the dark, then how am I supposed to use the idea of “light” to aid me in my healing?

It was never the physical light that I needed to see in order to find healing, but rather the recognition of God as my spiritual light.

As I thought about this and tried to pray, I could hear the voice of my mama singing Hymn 47 from the Christian Science Hymnal, which begins:

Day by day the manna fell:
O, to learn this lesson well.
Still by constant mercy fed,
Give me, Lord, my daily bread. (Josiah Conder)

At first it was hard to make out the meaning of the words, but as I thought about them, I began to feel a sense of peace. I tried to separate myself from the erroneous thought that I would not get past this difficulty, or that pain could control me. I was able to really listen and understand the words that promised me a daily sense of peace and strength, to hold on to reality and not give in to the dream of life in matter—because, in reality, my life is kept safe in God’s hands.

As I drifted off to sleep, I could hear one of my friends reading Hymn 148 to me. One part that I held on to was from the first verse: “But God is round about me, / And can I be dismayed?” The third verse also stood out to me:

Green pastures are before me,
Which yet I have not seen;
Bright skies will soon be o’er me,
Where darkest clouds have been.
My hope I cannot measure,
My path in life is free;
My Father has my treasure,
And He will walk with me.
—Anna L. Waring

Later that night, I woke up and was still in pain. I thought back to the parts of Hymn 148 that had comforted me earlier, but I was still confused. I just couldn’t see any “bright skies” coming—because anything bright hurt me! Then I remembered something from the weekly Bible Lesson from a couple of weeks earlier. There’s a part in Science and Health that talks about a person being on trial in the “Court of Error” (see pp. 430–442). The person was about to be sentenced because he’d lost the case, but then Christian Science raised an objection and he was taken to the “Court of Spirit” instead. There, the person was set free from the accusation of sickness. I knew that I could make the decision to be “tried” in the Court of Spirit, or in other words, to rely on God’s laws, which always bring healing.

As I thought about this, I realized that it was never the physical light that I needed to see in order to find healing, but rather the recognition of God as my spiritual light. He is the light that can dispel any darkness that would try to separate me from reality. It is that true light from God that allows me to find peace and to see His promise for my strength to be restored and renewed daily. And as soon as I accepted this idea, I was able to open my eyes, get up, and walk on my own. Not only was my body free of pain, but I felt filled with that divine light that allowed me to see—not with my own eyes, but with the eyes of pure faith. Afterwards, I went back to sleep with a newfound sense of peace. No longer was I closing my eyes to escape the lights. I closed my eyes to embrace the divine light just like it was embracing me.

That night it was as though God had walked me through everything. I could not help but see myself as a perfect spiritual reflection, and never anything less.

The next morning I woke up free from the pain and doubt. I was so excited to see my friends, and they were happy to see me in a great mood. This healing made me feel more ready for my finals than ever. The rest of the week was great, and I got to spend time with all my senior friends before graduation. I finished the year stronger and happier.

It is because of God’s ever-present guidance and the true light given to everyone that I am able to share this with all who read it. And for that I am forever grateful!

Larie Patterson is originally from Arkansas. She is a freshman at Principia College in Illinois. 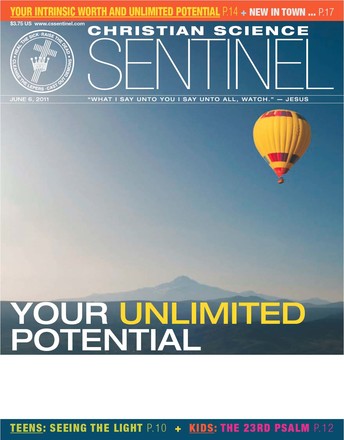 New book emphasizes prayer as a way of life

From fear to faith

Prayerful defense of the world’s forests

What the 23rd Psalm means to me

Your intrinsic worth and unlimited potential

A higher degree and greater potential

New in town and prepared to bless

Look beneath the surface

Love is the healer