Whether it’s the changing earth, natural disasters, or children caught in the crosshairs of political decisions, there is a sense of jeopardy in many corners of the globe. Where can the world look for rescue?

For much of my life, I’ve been known as a rescuer. Animals, people—if there was a need, I felt impelled to step in to meet it. But as I grew in my understanding of Christian Science, I realized I was being called to a deeper understanding of the idea of rescue.

A catalyst moment occurred when one day, completely unexpectedly, my husband and I found our adult son and his two children, both under three years old, standing on our doorstep asking to move in with us. It wasn’t long before the list of needed room rearrangements, supplies, meals, and scheduling challenges appeared somewhat overwhelming.

I felt personally responsible for not only the well-being of these family members but also all these details, and exhaustion started to set in. That’s when I began to think more deeply about what my role really was in helping during this uncertain time. Was I the rescuer of this family? Was it up to me to shepherd them through these deep waters?

Questions like these led me to prayer. As I prayed, the freeing idea came that it wasn’t me in the role of mother or grandmother who was rescuing. That would have put me at the center of things instead of God. No, it was what God, divine Love, knew about these dear relatives—the truth of their being—that would show all of us the way forward.

What is this truth of being? Through Christian Science, I’ve learned that it’s not what we might confront in news reports—or in my case, on my own doorstep—such as someone who might seem to be the helpless victim of circumstance. Instead, it’s the spiritual understanding of each individual as created and governed by a loving, faithful Father-Mother God who ensures the continuity of all that’s needed for a full and harmonious life. This spiritual view, which we gain through the spiritual sense of the Bible and in prayer, brings a shift in thought from the clamor of uncertainty to the spiritual fact that everything we need, including supply, security, even purpose, has its source in God and so can’t be lost.

I began to think more deeply about what my role really was during this uncertain time.

This truth of being—that God’s creation is spiritual and under His, Her, eternal, loving care—is, in reality, all that really exists. And we can call upon God in prayer rather than feel we need to rush in, roll our sleeves up, and personally bear the burden of whoever or whatever seems in distress or danger. In my own life, I’ve seen that bearing witness in prayer to what God sees, knows, and forever maintains about each of Her, His, children actually enables the rescue—or the healing of a jeopardous circumstance. This liberating idea became my foundation as I cared for this family, and the exhaustion and burden I was feeling soon dissipated.

When we’re used to playing the role of rescuer, it can be tempting to think that our success is dependent upon us and our good ideas. But here again Christian Science had something revelatory to teach me. As I continued to pray about how best to help my son and grandchildren, I began to see that only one idea really mattered: the spiritual idea of creation, which, as the Bible tells us in the first chapter of Genesis, is very good, like its creator. I began to ask myself what this spiritual idea looked like for each of the issues my son and his children were facing. What was the spiritual idea of family? Of home? What about parenting, stability, and so on?

As I prayed to spiritualize my perception of each of these concepts, I saw with more clarity that there was no power or negative influence that could tear down the true, spiritual sense of family, which is defined and maintained by God. I got a better understanding that home is never dependent upon a physical location but is a deep feeling of security that God provides­—wherever an individual or family might be. I felt strengthened in my conviction that the true Parent is actually God, who would forever love and parent not only my grandchildren but also their parents—and my husband and me!

After four months in our home, my son and his children found a new living situation that, to me, has been clear evidence of the fact that both the true spiritual idea of family and home and the eternal fathering and mothering of God are concrete realities in their lives. And my newfound understanding of what rescue really is has helped me see that these steps of progress weren’t the result of my personal efforts to rescue them in their time of instability. Rather, these family members have, at each moment, been shepherded and cared for by God, the divine Principle of unfailing and reliable good.

I can help the world by being an active witness in prayer to the presence of the divine influence.

This divine, shepherding influence is, in fact, always present in human consciousness; no one is without it. It is the Christ, the truth of being Christ Jesus both lived and demonstrated in healing. And as the textbook of Christian Science, Science and Health with Key to the Scriptures by Mary Baker Eddy, explains: “The physical healing of Christian Science results now, as in Jesus’ time, from the operation of divine Principle, before which sin and disease lose their reality in human consciousness and disappear as naturally and as necessarily as darkness gives place to light and sin to reformation. Now, as then, these mighty works are not supernatural, but supremely natural. They are the sign of Immanuel, or ‘God with us,’—a divine influence ever present in human consciousness and repeating itself, coming now as was promised aforetime …” (p. xi).

Although I still love to help and “mother,” I’m learning that our good, our help, and our hope are never found in a person but in this Principle. Sometimes we see the operation of Principle as a divine impulsion to be supportive and loving. But whether or not a person is present to help, Principle can always be felt as the correcting, healing divine influence that’s ever present within each of us. Now, instead of feeling a personal responsibility to rescue, I’ve seen that I can play an important role in helping the world by being an active witness in prayer to the presence of this divine influence, which provides a way out of trouble or distress.

As I dig deeper into the purely good nature of God and what that means for all of creation, I continue to grow in my spiritual conviction that in reality, nothing needs rescuing. “All that really exists,” writes Mrs. Eddy, “is the divine Mind and its idea, and in this Mind the entire being is found harmonious and eternal” (Science and Health, p. 151). This correct spiritual viewpoint, applied to the world around us and practiced in our daily lives, can help uplift the view that says creation has fallen into a state of distress and danger and restore the understanding that all truly is as God made it—harmonious and lovingly cared for. 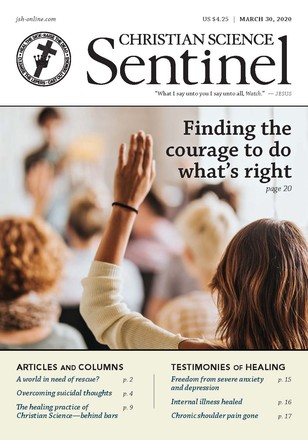 A world in need of rescue?

Manage anger or heal it?

Freedom from severe anxiety and depression

Finding the courage to do what’s right