"All the rugged way"

Mollie liked going to camp every year. She loved making new friends and being away from home for a short time. She went to a camp where everyone was a Christian Scientist and relied on God's care. ...

This summer Mollie was especially excited about the horseback riding program. She was just old enough to go on more difficult rides through the beautiful mountains nearby. And she was excited to try out her new riding boots. She signed up for the first overnight trip. It included a horseback ride through the mountains and then a hike up the back of the final peak.

The day of the ride soon came. Mollie pulled on her boots and set off with the counselors and other campers. They went through the forest and up steep trails. Sometimes it was a bit scary to look down.

Just before lunch, they reached the back of the peak where they dismounted their horses to make the climb on foot. Mollie hadn't expected the hike to be so steep or so long! She could see that the trail led up and up; she felt dizzy even looking at it. She was afraid of climbing. Even the jungle gym in the playground at school had seemed far off the ground. Mollie's stomach was turning somersaults, so she told the counselor, PJ, that she would wait at the bottom for everyone. PJ was understanding, but she encouraged her to try. She reminded Mollie of how beautiful the view would be once they got to the top.

Mollie was still frightened, but she agreed to try. Maybe it wouldn't be so bad. But as she progressed up the mountain, she became more and more afraid. It wasn't easy, and her feet kept slipping. Her riding boots were of little help on the rocks and loose sand. She began to regret ever having brought them. She wished she had never come to camp at all!

Halfway up, Mollie sat down and refused to go any farther. She held on to a nearby rock and began to cry. PJ sat down next to her and put her arms around her. Quietly they began to pray. They talked about God's ever-present strength and power. Mollie had already seen God's care for her many times—proof of man's spiritual perfection as God's reflection. They talked about how nothing could separate a reflection from its original. Mollie thought of the time when the doctor living next door told her mother that Mollie had the mumps. And she was healed through prayer very quickly. On another occasion, she had fallen out of the treehouse and had hurt her head. She and her mother had prayed, and she had been able to go back and play in just a few minutes.

PJ talked with Mollie about how God holds man up and keeps him from falling. The Bible represents God as saying, "Fear thou not; for I am with thee: be not dismayed; for I am thy God: I will strengthen thee; yea, I will help thee; yea, I will uphold thee with the right hand of my righteousness" (Isa. 41:10). Mollie felt a little better. Then PJ reminded her of the words from one of Mrs. Eddy's poems called "'Feed my sheep,'" set to music in the Christian Science Hymnal (see Hymn No. 304). They sang it together:

Shepherd, show me how to go
O'er the hillside steep,
How to gather, how to sow,—
How to feed Thy sheep;
I will listen for Thy voice,
Lest my footsteps stray;
I will follow and rejoice
All the rugged way.

They agreed that together they would listen for the safe way to make it up the mountain. Mollie no longer felt fearful but stronger, more secure and confident with each step she took as she trusted in God's ever-presence, strength, and care. When she did lose her footing, she became even more determined to "follow and rejoice." Mollie kept singing that hymn all the way up. When they reached the top, she had never seen anything so beautiful. On the way down the mountain, Mollie and her friends enjoyed slipping and sliding. And she wasn't afraid anymore.

They made their way back to camp on horseback. What a wonderful day it had been! Mollie had let God lead her up the mountain, and now she rejoiced at having gone all that rugged way. 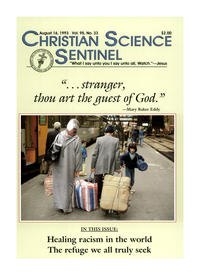