It is sometimes felt that Christian Scientists deify Mary Baker Eddy, but this is not true. They love her, yes, but they do not worship her. Who does not love a benefactor who has brought into his life a light that has completely changed his course, dispelled his fears, brought comfort to his sorrow and surcease to his ills?

Mrs. Eddy was not motivated by personal ambition. She did not yearn for fame or glory. Born and reared, as she had been, on an obscure New England hilltop, her early life held forth no promise of these. Yet it is not hard to believe that it was on this obscure hilltop, with its vistas of surrounding mountains, its wide expanse of sky, its rigorous winters, its springtimes of promise and autumns of harvest, that the Christ, Truth, germinated in the heart of the little child.

The parental home was one of stern Protestantism, strict morality, and sterling worth. From early childhood an innate love of God enriched her affections, a desire for learning inspired her reading, a spiritual hunger spurred her education. She loved good literature; she loved the Bible; she loved mankind. In spite of delicate health, there were happy times during her childhood and adolescence, but her early womanhood was fraught with illness, grief, frustration, and defeat.

Mrs. Eddy was a spiritual pioneer. Through these years of trial her faith never wavered. Instinctively she felt that God did not send affliction and that mankind had a way of escape. Dimly she perceived that there must be a spiritual law underlying the healing works of the Master. She searched for this law, not seeking deliverance for herself alone but for all men. On one or two occasions she touched the healing power for others, but the understanding of it eluded her. She questioned materia medica; she experimented with homeopathy; she tried other methods, and finally investigated the practice of mesmerism. At first the subtlety of this method deceived her. She attributed its apparent healing power to Christ and believed she had found the answer. But spiritual awakening finally broke this deception.

In her darkest hour, when an accident appeared as if it might prove to be fatal, she turned to her Bible. As she pondered anew the account of Jesus' healing of the palsied man, the light of understanding broke with such intensity that she experienced immediate healing. But the search did not end there. This was but the beginning. It was the moment of discovery, a discovery which she confirmed through three years of intensive study of the Scriptures. She tested her discovery, which she was to name Christian Science, by healing others with the truth that she herself was learning. She made notes on her Scriptural study; she began to teach, and under the dictation of divine inspiration she wrote the book Science and Health, which later became Science and Health with Key to the Scriptures, the Christian Science textbook. Thus she won the title of Discoverer of Christian Science.

This was a unique period in the world's history. It confirmed Biblical prophecy; it introduced a new era; it fulfilled the Master's promise of the coming of the Comforter. In her book Retrospection and Introspection Mrs. Eddy says: "Jesus of Nazareth was a natural and divine Scientist. He was so before the material world saw him. He who antedated Abraham, and gave the world a new date in the Christian era, was a Christian Scientist, who needed no discovery of the Science of being in order to rebuke the evidence. To one 'born of the flesh,' however, divine Science must be a discovery. Woman must give it birth. It must be begotten of spirituality, since none but the pure in heart can see God,—the Principle of all things pure; and none but the 'poor in spirit' could first state this Principle, could know yet more of the nothingness of matter and the allness of Spirit, could utilize Truth, and absolutely reduce the demonstration of being, in Science, to the apprehension of the age."  Ret., p. 26;

As the revelation became clearer and stronger and more compelling, still a humble disciple and a friend to all mankind, she forged ahead, onward and onward. She worked incessantly. She healed and taught; she wrote and lectured and preached. The growing resistance of the world surging through pulpit and press met her on every side. Thus she saw that her followers needed the protection of an organization. The Cause must be established, a movement must be set on foot. Impelled by divine wisdom she founded her Church. Today this spiritually based Church, The Mother Church, The First Church of Christ, Scientist, in Boston, Massachusetts, encircles the world with its branches. Thus Mrs. Eddy became the Founder of Christian Science.

Her prayers as Founder produced the Manual of The Mother Church, a small volume of By-Laws so complete and inspired that they meet every need of the organization, so flexible that they do not restrict its growth, so simple that a child can understand them, so strong that none may disobey them. Of this Manual Mrs. Eddy writes, "It stands alone, uniquely adapted to form the budding thought and hedge it about with divine Love." Man., Art. XXXV, Sect. 1 ;

As the Discoverer and Founder of Christian Science, Mrs. Eddy stands as its Leader. Throughout the years of her human life she led her followers step by step through persecutions and trials and victories. She stood undaunted by the resistance of the carnal mind. She laid bare its devious ways—its duplicity, deceptions, subtlety, and nothingness. She proved the omnipotence of good, the supremacy of deific Mind, the allness of God, and revealed the spiritual, immortal nature of man. Today as Pastor Emeritus of her Church she still speaks through the pages of the inspired textbook, Science and Health, at every Christian Science service throughout the world. Through her published writings she counsels, chides, and guides her followers.

Christian Science has come to the world as the Comforter promised by Christ Jesus. He said, "But the Comforter, which is the Holy Ghost, whom the Father will send in my name, he shall teach you all things, and bring all things to your remembrance, whatsoever I have said unto you." John 14:26 . This Science cannot be poured into molds of human thinking. It is not coordinate with orthodox doctrines of theology, with medical practice, with man-made systems, or with human philosophy. It proclaims the allness of Spirit, God, and the nothingness of matter. In the measure that its underlying divine Principle is understood it can be demonstrated. Thus it brings healing to the sick, reformation to the sinner, comfort to the sorrowing, peace to the world.

The name of Mary Baker Eddy can never be separated from Christian Science. Through her the revelation speaks. As Christian Science becomes better understood and human consciousness yields to the divine, her universal friendship will be valued, the glory of her lifework will be recognized, and her name will be honored in the annals of history. 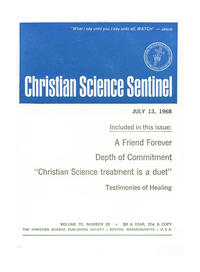