"An army of people praying"

He never dreamed it would lead to this. It had started out with little things, like joining his friends in a few acts of meanness. And like heckling the new Asian students on the school bus and refusing to let them have a seat. There hadn't been any violence—just the hurt feelings that people naturally have when other people degrade them and treat them like a subclass.

Of course, deep down he'd never felt very comfortable about treating the Asian kids this way. For one thing, he knew it wasn't consistent with what he'd learned in Sunday School about how all people are actually God's children—wherever in the world they may live and however they talk. God, whose affection for all His sons and daughters is so constant that it never begins and never ends, loves without asking questions, without setting out conditions. No matter how tall or short people are, what kind of tennis shoes they wear, whether they're "cool" or not—God loves them.

In other words, Duane knew in his heart that God loved the very kids he and his friends were hassling. And if God loved these kids, it was absolutely unnatural for him—contrary to his true nature as the child of God—to feel anything but compassion and caring for them. They were really a lot more than new fellow classmates who'd been dropped into his comfortable California lifestyle without warning. They were —in God's sight—his brothers and sisters. All this Duane knew. But, the fact was, it was hard to stand up to his friends. It was hard to be courageous.

Today, however, he was being pushed to make a once-and-for-all choice. Yesterday a gang had murdered a high-school student across town. And this time, it had been a gang of Asian kids. So now Duane's friends were out for blood, for revenge. About twenty of them brought weapons of various sorts to school with a specific plan. They wanted to attack a certain Asian boy. And they wanted Duane to help them.

As they stepped off the school bus that afternoon, Duane's friends began shouting and waving sticks at the Asian youth. And that was when Duane realized he couldn't go along with his buddies any longer. He moved as far away from them as he could, and he reached out to what he knew was the only force that could help—God. There wasn't time for doubt or fear, or even much of a prayer in the form of words. But all of a sudden Duane became acutely aware of God's mighty presence right there to save these children from tragedy.

What happened next is hard to explain. Just as the attack seemed ready to begin, the entire group of kids just dispersed. Nothing was said, but it was clear the crisis was over. And everyone was safe.

Later Duane thought a lot about the events of that day. Gradually, he understood that what had really happened was that, first, his heart changed. His indifference toward the feelings of the Asian students and his fear of losing the friendship of his peers had somehow shifted to love—love that made him turn to God. Duane realized that the love he'd felt for the Asian boy was actually a dynamic form of prayer. And this had instantly quelled a situation that had all the makings of a violent confrontation.

When you think about it, peer pressure like Duane felt is really a kind of mental contagion. Hateful or fear-filled thoughts can sometimes seem to spread among people the way panic does through a stable full of horses. Mary Baker Eddy explains mental contagion this way in her book Miscellaneous Writings: "Floating with the popular current of mortal thought without questioning the reliability of its conclusions, we do what others do, believe what others believe, and say what others say" (p. 228). Yet just one sincere prayer of love is enough to halt an epidemic like this instantly.

In a way, peer pressure is like a trap. But you don't have to fall into it. You can identify it as a trap and then back right off. The Bible helps us see that people are safe when they recognize a trap as a lethal allurement of evil. "My son," one writer says, "if sinners entice thee, consent thou not. ... Surely in vain the net is spread in the sight of any bird" (Prov. 1:10, 17).

Unfortunately, most mental traps don't come labeled as such. It would be convenient if they wore signs that said, "I'm a trap," or "I'm peer pressure," or "I'm evil, and I'm going to get you in trouble if you go along with me." Then the temptation to experiment with recreational drugs or sex outside of marriage or gang violence "for the thrill of it" would be easier to identify and resist.

So how do we know if something is a trap or not? How do we know if it's good for us or bad for us? Maybe we simply need to use the measuring rod Christ Jesus talked about in his Sermon on the Mount when he said, "Every good tree bringeth forth good fruit; but a corrupt tree bringeth forth evil fruit. ... Wherefore by their fruits ye shall know them" (Matt. 7:17, 20).

In other words, we can ask ourselves in all honesty if a certain plan of action will make us—and everyone else involved —happy or unhappy, spiritually stronger or weaker, forward-moving or backward-moving in our lives. And then we can take whatever answer we get as a message straight from God, as an utterance of His Christ.

When the Christ urges us firmly to avoid—or to follow— a certain course of action, then we're feeling a good kind of pressure. It's a pressure to do God's will, to rise above merely mortal pressures like fear or sensuality or a desperate kind of craving to have people like us. It's a pressure to let God show us who we forever are as His children. Mrs. Eddy describes this kind of pressure in Science and Health with Key to the Scriptures: "Christian Scientists must live under the constant pressure of the apostolic command to come out from the material world and be separate. They must renounce aggression, oppression and the pride of power. Christianity, with the crown of Love upon her brow, must be their queen of life" (p. 451).

This pressure to come out from the crowd, to break away from material thinking and let divine Love take the lead in your life, is the only pressure you need to feel, because it's impelled by the law of God. When you and I yield to this unselfish pressure, we're really praying. As Duane wrote to me recently, "With the good that the prayers of just one person can bring to a situation like the one I was in, it's inspiring to think about the possibilities of an army of people praying to replace hatred and fear with love."

Joining an army of people praying is the opposite of giving in to peer pressure. It's joining in a holy fight against conformity to material standards. And it's the only kind of warfare that will ever bring lasting peace to humanity. 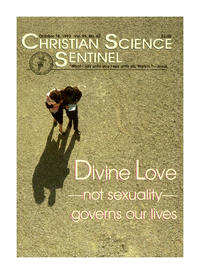